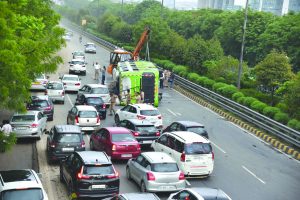 The Ministry of Road Transport and Highways has released its annual publication on ‘Road Accidents in India, 2018’. It provides data on accident related deaths and injuries, calendar yea- wise, based on information supplied by the Police Department of States and UTs.

The Year End Review 2019- Ministry of Road Transport & Highways released at the end of the year 2019 claims that this was a year for consolidating the gains that accrued from major policy decisions taken in the previous five years, a time for monitoring of ongoing projects, tackling road blocks and adding to the already impressive pace of work achieved during the past years.

During 2018-19, projects in about 5,494 km length were awarded and completion was achieved in about 10,855 km length of roads. The rate of development of roads has increased significantly from about 11.7 km during 2013-14 to about 30 km now. During the current year, projects for 3211 km length have been awarded and 5958 km length has been constructed till November 2019.

During the year the Ministry and its associated organizations have carried forward the good work of the previous years, expanding the national highways network in the country, taking various steps to make these highways safe for the commuters and making best efforts to minimize adverse impact on the environment. As a result, National Highways (NHs) length has increased from 91,287 km in April, 2014 to about 1,32,500 km. as on 31.12.2019.

Under Toll Operate Transfer (ToT) mode, a bundle of 9 projects with total length of 566 km have been awarded this Financial Year for a concession fee of 5,011 crores against the reserve price of 4,998.71 crore. The Ministry proposes to develop additional 60,000 kms of National Highways in the next five years, of which 2500 km are Express Ways/Access Controlled Highways, 9000 kms Economic Corridors, 2000 kms for Coastal and Port Connectivity Highways and 2000 kms Border Road/ Strategic Highways. The Ministry also intends to improve connectivity for 100 tourist destinations and construct Bypasses for 45 towns/cities during this period.

With a view to augmenting sources of funding for NH projects, the NHAI intends to raise Rupees one lakh crore through Toll-Operate-Transfer (TOT) Model of asset monetization in the next five years. Finances are also likely to accrue from Securitization of Toll Revenues as well as the setting up of Infra Investment Trust (InvIT). Other steps being taken by NHAI include financing new projects through National Investment and Infrastructure Fund (NIIF) supported SPVs.

With a view to expanding the project base available with NHAI for monetization under TOT mode and for raising finance against toll receipts from identified Public Funded/Hybrid Annuity Model (HAM) projects through securitization, the Cabinet Committee on Economic Affairs (CCEA) has accorded the following approval (vide communication no. CCEA/20/2019 (i) dated 25.11.2019 ):

The work of major bridge across Sharavathi backwaters, approaches between Ambargodu and Kalasvali in Karnataka and 16 packages of Trans Rajasthan Highways project have been awarded. A three-lane underpass inaugurated at Parade Road junction near Manekshaw Centre on NH 8 in New Delhi on 12.07.2019. With opening of this underpass, movement of traffic from Airport to Dhaula Kuan has become signal free.

Dasna-Hapur section of Delhi-Meerut Expressway (package-3) in Uttar Pradesh’s Pilakhuwa has been inaugurated by the Hon’ble Minister, Shri Nitin Gadkari on 30th September, 2019. The completion of this section is expected to further help in decongesting the National Capital Region, bring down pollution levels and reduce travel time significantly. The integrated bus ports in Cuttack (Odisha) and in Baddi (Himachal Pradesh) have been approved and the DPRs thereon are under progress.

A State Support Programme aimed at incentivising the States to improve their road safety performance is proposed to launched to reduce the overall fatalities by road accidents by 25 per cent by 2024. With a view to accurately recording the accident details so that timely corrective action is undertaken a Geo-Tagged accident data collection programme would be launched under the project “Integrated Road Accident Database (IRAD)”. IT based road safety infrastructure would be erected on the entire four lane and above Highways. Incidence management systems shall also be provided on all such Highways.

The Motor Vehicles Act, 1988 has been amended first time in a comprehensive way after thirty years by The Motor Vehicles (Amendment) Act, 2019, passed by the Parliament and published in the Gazette of India on 9thAugust 2019. The Act is likely to bring reforms in the area of Road Safety, bring citizen facilitation, transparency, and reduce corruption with the help of information technology and removing intermediaries. The Act will strengthen public transport, safeguard and protect Good Samaritan and reform the insurance and compensation regime. It will allow innovation and new technologies such as driverless vehicles, to be tested in live environment and increase efficiency in research. The Act will facilitate Divyang by allowing motor vehicles to be converted to adapted vehicles with post-facto approval and facilitating licence to drive adapted vehicles. The provisions of compensation and post — accident treatment have been amended and measures will be taken provide cashless treatment for accident victims.

However, what is needed is that the government should link insurance premium of the vehicle or driver with the driving behaviour. A driver with bad traffic history should pay more insurance premium compared to safe drivers. Alongside, the government should make investment in rail and bus transport to increase the share of public transport. It has been observed that road accidents in India are increasing owing to rapid urbanization and highest motorization growth rate. Public transport will help to reduce the number of road accidents and accidental deaths.