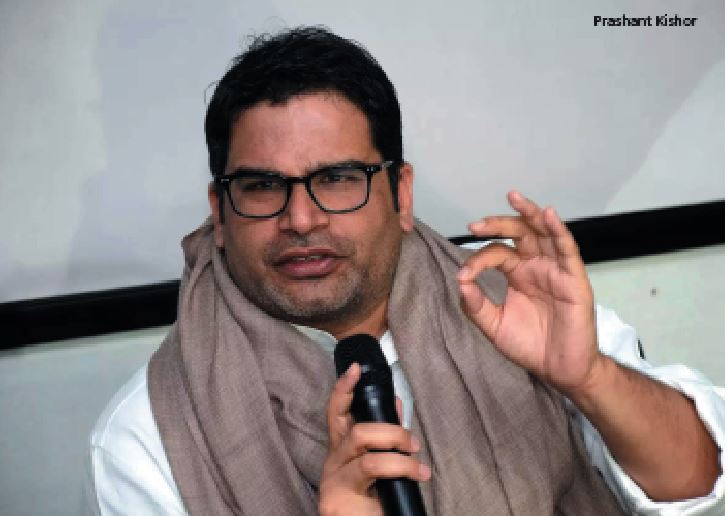 In order to ward off criticism over the exit of many young leaders in the past and project a positive image, the Congress is trying to rope in young and dynamic persons like Jignesh Mevani, Kanhaiya Kumar and Prashant Kishor.

Over the past two years, young leaders like Jyotiraditya Scindia from Madhya Pradesh, Jitin Prasada from Uttar Pradesh and Sushmita Dev from Assam have left the grand old party as they were dissatisfied over the prevailing situation.

Over the past weeks, former party chief Rahul Gandhi, along with his sister Priyanka Gandhi Vadra, has been exploring ways to induct former JNU student union leader Kanhaiya Kumar in Bihar and independent MLA Jignesh Mevani in Gujarat. The two leaders may join on October 2, Gandhi Jayanti. Prashant Kishor would play a national role and help the Congress prepare for the 2024 Lok Sabha poll battle.

The plan will help the grand old party showcase that it still has the capacity to attract young talent from outside even as it gives important roles to those who are already in.Kanhaiya was born in 1987 in Bihar’s Begusarai. His involvement in student politics began during days at College of Commerce in Patna. After graduation, he did a doctorate in African Studies from the Jawaharlal Nehru University in 2019.

Before that, Kumar had shot to fame in 2016 as the then JNU students union president and faced a sedition case over some allegedly provocative remarks made during an event on the campus. The Communist Party of India fielded Kumar against BJP’s firebrand leader Giriraj Singh in the 2019 Lok Sabha polls from Begusarai. He lost the polls.

In February 2020, while campaigning during the Bihar assembly polls, stones were hurled at Kumar’s convoy when he was on his way to address a rally against the Citizenship Amendment Act in Madhepura district.

CPI Bihar secretary Satya Narayan Singh had condemned the incident. “We strongly condemn the attack on Kanhaiya Kumar’s convoy in Madhepura. Yesterday, a similar attack took place in Supaul which left vehicles damaged and a number of people injured. These attacks are being engineered by supporters of the Sangh Parivar and the BJP.”

“If the government does not ask its police to be diligent and provide adequate security, we will be compelled to launch an agitation,” he added.

Kumar was on a state-wide ‘Jan Gan Man Yatra’, which was launched on January 30, coinciding with the death anniversary of Mahatma Gandhi, under the banner of ‘Joint Forum Against NPR/NRC/CAA’, when the attack took place.

He had lamented that in the 2020 polls in Bihar, the ruling JD-U-BJP coalition was setting the agenda and the opposition was only reacting to it instead of coming out with their own issues.

Making a scathing attack on the Nitish Kumar government, Kumar had said, “Even after ruling the state for 15 years he failed to solve the problems in the fields of education, health and other core sectors. Bihar still stands on the same position as it did 15 years ago in terms of development.”

Referring to the Lok Janshakti Party, which was contesting on its own with a promise to defeat the JD-U and form the next government with the BJP, he had said that “there was utter confusion in the ruling alliance over who was with whom and who was against whom.”

Of late, Kumar has reportedly not been feeling comfortable in the CPI and is looking for a change. He may get an opportunity to work for the revival of the Bihar Congress.

Though the central Congress leadership is keen to induct Kumar at the earliest, it has to deal with the fact that the CPI leader has not been comfortable with RJD leader Tejaswi Yadav, who is an ally of the grand old party in Bihar.

Another reason why Kumar’s induction is taking time is that the Congress first needs to finalise its new state unit chief. The Congress party is finalising a rejig in the Bihar unit. There is immense lobbying on as state in-charge Bhakta Charan Das has proposed the name of Rajesh Ram for the post of state president.

The incumbent state president Madan Mohan Jha resigned after the last year’s poll debacle. The Congress had been blamed for the poll defeat of the Grand Alliance as it fell just short of a majority.

Some leaders in the party have reservations over Kumar’s joining. They point out that he was involved in a ruckus in the CPI office in Patna last year.

However, they acknowledge that Kumar is a good orator and can effectively campaign for the Congress in the eastern parts of Uttar Pradesh where assembly elections will be held next year.

The grand old party has not been in power in Bihar since 1990 and could win just 19 of the 70 seats it contested as an ally of RJD in the 2020 polls. The party tally was 27 seats in 2015. Like Bihar, Rahul and Priyanka are also looking at revamping the Gujarat unit as the western state will have assembly elections later next year. 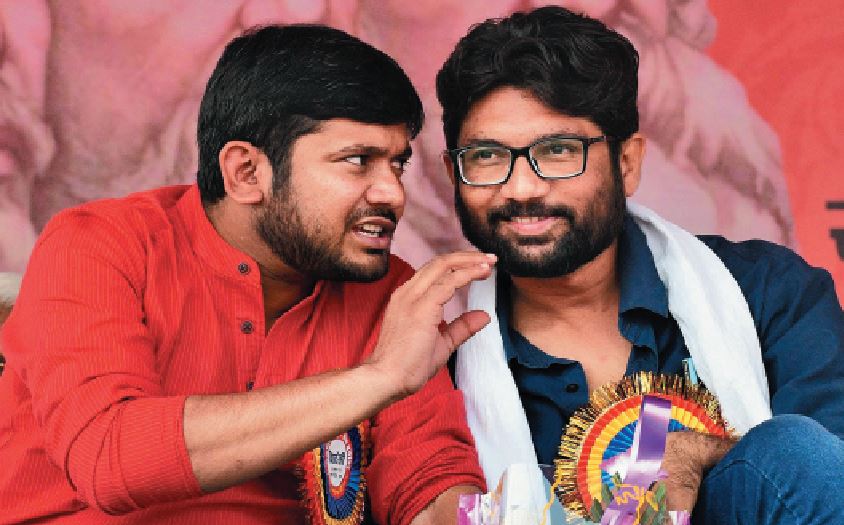 Born on December 11, 1982, in Ahmedabad district of Gujarat, Mevani did his schooling from Swastik Vidyalaya and Vishwa Vidyalay Madhaymik Shala in the district.

He completed his graduation in English literature in 2003 from HK Arts College in the same city and received a Diploma in Journalism and Mass Communication.

In the 2017 Gujarat assembly polls, the Congress had supported Mevani by not fielding a candidate against him from the Vadgam seat in Banaskantha district.

Mevani recently hailed Rahul’s move to appoint the first Dalit-Sikh chief minister in Punjab in Charanjit Singh Channi saying the step will have a soothing effect on the subaltern population.

He also slammed the BJP for replacing Vijay Rupani as Gujarat chief minister with first time MLA Bhupendra Patel. “People of Gujarat would have appreciated had Mr Rupani resigned for his monumental mismanagement of Covid crisis,” Mevani tweeted.

Last year, the independent lawmaker had pointed at a scam in Balundra village in Amirgadh tehsil after some villagers affected by the pandemic sought work under the Mahatma Gandhi National Rural Employment Guarantee Scheme (MNREGS) but were told that their names were already registered under the scheme.

Mevani alleged that similar scams were taking place in many other villages of Gujarat, including in his constituency Vadgam, wherein money was being siphoned off by others although villagers were shown as its beneficiaries.

In 2020, Jignesh had spoken against a UGC circular that directed all universities, colleges and other grant-in-aid institutions and centres to prepare roster system keeping the department/subject as a unit for all levels of teachers, instead of a roster taking college or university as a unit.

He said he wanted to be a voice for Dalits working in private companies, sanitation workers and landless agricultural labourers, over being a voice for reservation while taking part in a protest in Delhi University.

“As my Ambedkarite and Marxist orientation increased, I felt the need to repeat to myself that even more than reservation, I should become the voice of Dalit labourers in this country’s private companies and factories,” the Dalit activist said.

“I became more conscious, that more than reservation, I must speak for the sanitation workers who enter sewers, and landless agricultural labourers. Today the Constitution, farmers, Dalit labourers, tribals and teachers are in such a crisis, despite varying ideologies, there is a need for us to come together,” Mevani said.

In 2018, Jignesh had questioned the atrocities being committed against Dalits, minorities and farmers and charged the BJP with instigating anti-Dalit violence in Bhima Koregaon in Maharasthra.

“The way in which Hardik (Patel), Alpesh (Thakore) and Jignesh (Mevani) with the support of the youth in Gujarat brought the BJP down from over 150 seats to 99 seats… That is the reason we are being targeted,” Mevani had told a rally in Delhi.

He had also sought the release of Bhim Army founder Chandrashekhar Azad — a Dalit leader who had been jailed and the National Security Act was slapped against him for allegedly instigating violence in Saharanpur in June the previous year.

Kishor is a known poll strategist and has worked with several parties in the past, including PM Modi in 2014.

In the past, Kishor has worked with several political parties as an election manager and even joined the Janata Dal-United in 2018 after he helped party chief Nitish Kumar win the 2015 Bihar assembly polls.

Kishor, who was appointed as JD-U vice president, was expelled in January 2020 due to his disagreement with the party over the Citizenship Amendment Act.

He was behind YSR Congress chief Jagan Mohan Reddy’s victory in the 2019 Andhra Pradesh assembly polls.

Early this year, Kishor made a significant contribution towards chief minister Mamata Banerjee’s historic win over the BJP, quit the role of a poll manager immediately after the results saying he was looking for a change. He also advised DMK chief MK Stalin in the 2021 Tamil Nadu polls.

For the past few months, Rahul has been exploring ways how to induct him in the Congress.

Kishor was poll manager for the party in the 2017 Uttar Pradesh and Punjab assembly elections. While Punjab was a success, UP turned out to be a disaster.

Though Punjab chief minister Amarinder Singh had appointed Kishor as his principal adviser for the 2022 assembly polls, the strategist has resigned saying he was taking a break from active role. This means he is more likely to focus on the 2024 national elections.

During his interactions with the Gandhis, Kishor suggested a few ideas to revive the Congress and restructure the organization. The proposals are being reviewed by select party veterans, who have also been asked by the leadership to figure out a suitable position for the strategist.