The Yogi Adityanath government in Uttar Pradesh has launched a massive anti-encephalitis vaccination program this year, but the positive desired results may take some time to trickle in. Successive governments in Uttar Pradesh have been talking about upgrading holistic health care in the State to cover the burgeoning population, but poor and underprivileged have always suffered. As for decades, the State lacked focus on holistic healthcare, the tragedy of such magnitude as Gorakhpur tragedy, was waiting to happen.

Yet still, it is ironic that as we celebrate 70 years of Independence, more than 70 children have died in a government hospital at Gorakhpur in Uttar Pradesh in last few days, pricking the conscience of the nation. Like the proverbial “to be or not to be”, there is a question mark as to the cause of deaths with the government insisting that lack of oxygen was not the reason, but it underlines the fact that hospitals in Uttar Pradesh are ailing.

Sadly, the government data shows that health care is particularly in a pitiable state in the eastern districts of Uttar Pradesh. The government data itself confirms that Japanese encephalitis, which afflicted many of the children who died last week, has by far claimed more than 10,000 lives in the State between 1978, the year of the first major outbreak and till now. According to doctors, encephalitis is a viral infection caused by a mosquito bite, which affects the brain, leading to coma and death. Year after year, there have been instances of high mortality. Tragically, Gorakhpur, the constituency of the Uttar Pradesh Chief Minister, Yogi Adityanath, has emerged as the epicenter of encephalitis induced deaths over the past few decades. According to official records, over 10,000 children have died since 1978 due to encephalitis and mind you, these are only recorded deaths. Independent figures are much higher as many kids die before reaching the hospitals and die for want of medical care.

There is an urgent need to reduce the incidence of fatal diseases by creating a foolproof and robust medical infrastructure. The Centre can pump in funds and the State government can add a matching grant.

Experts point out that encephalitis is correlated with increase in disease-transmitting mosquitoes due to water ponds, due to stagnant water and poor sanitation system. Cattle, pigs and birds living in close proximity to inhabitants, create viral diseases and encephalitis is a major disease borne out of it. The Union Health Ministry has a vaccination programme.

The way forward would be to launch a door to door campaign to weed out the spread of such a fatal disease. The Indian Council of Medical Research should also launch a special campaign for Uttar Pradesh. The planners should realise that the broader problem is open drains, laying of drinking water supply and sanitation pipes in close proximity, the waterlogged streets and absence of regular fumigation. What is needed is an extensive door-to-door immunisation programme by the State health authorities and visits by experts to every door to sensitize people. There is an urgent need to upgrade basic healthcare facilities at the village, block and district levels. The public spirited individuals and non-government organisations (NGOs) need to pitch in. There is also an immediate need is to provide all possible medical support to Baba Raghav Das Medical College.

There is a question mark over the cause of the deaths with the government insisting that lack of oxygen is not the reason for the deaths because similar deaths have been happening in the hospitals during the monsoon in past few years too. They blamed the deaths on encephalitis but the deaths should be a matter of embarrassment to the government that had promised to beef up health care system in the State. Nobody can dispute the outbreak of encephalitis in Eastern UP for past few decades and last year too there were 114 deaths of children.

Yet health authorities would find it difficult to counter the allegations that lack of oxygen was the reason behind the death of over 70 children in just days. To add to this, the UP Government would find it difficult to explain why has it suspended Dr Kafeel Ahmad Khan, in-charge of the pediatric ward who was responsible for oxygen supply? Also the government would look for answers as to why it has suspended Medical College chief Rajeev Misra if there was no negligence? To add to this, the frantic requisitioning of emergency oxygen supplies and the State government suspending the principal of the college point to the allegations that during these days the hospital lacked oxygen.

Surely, it will take an independent and fair inquiry to establish why so many children died at the Gorakhpur government hospital between August 7 and 11. The scope of the inquiry should include whether or not the lack of oxygen supply to those who were in extreme need particularly in neonatal stage was a cause for the tragic deaths. It is learnt that the company that supplied oxygen to Gorakhpur hospital had issued notice on large unpaid bills. The Government must find out the truth about whether the infants’ oxygen supply was indeed cut off for non-payment of dues to the supplier or it was the negligence on the part of hospital staff for there was a design behind it. All said and done, such a heinous crime must not go unpunished. 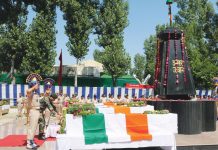