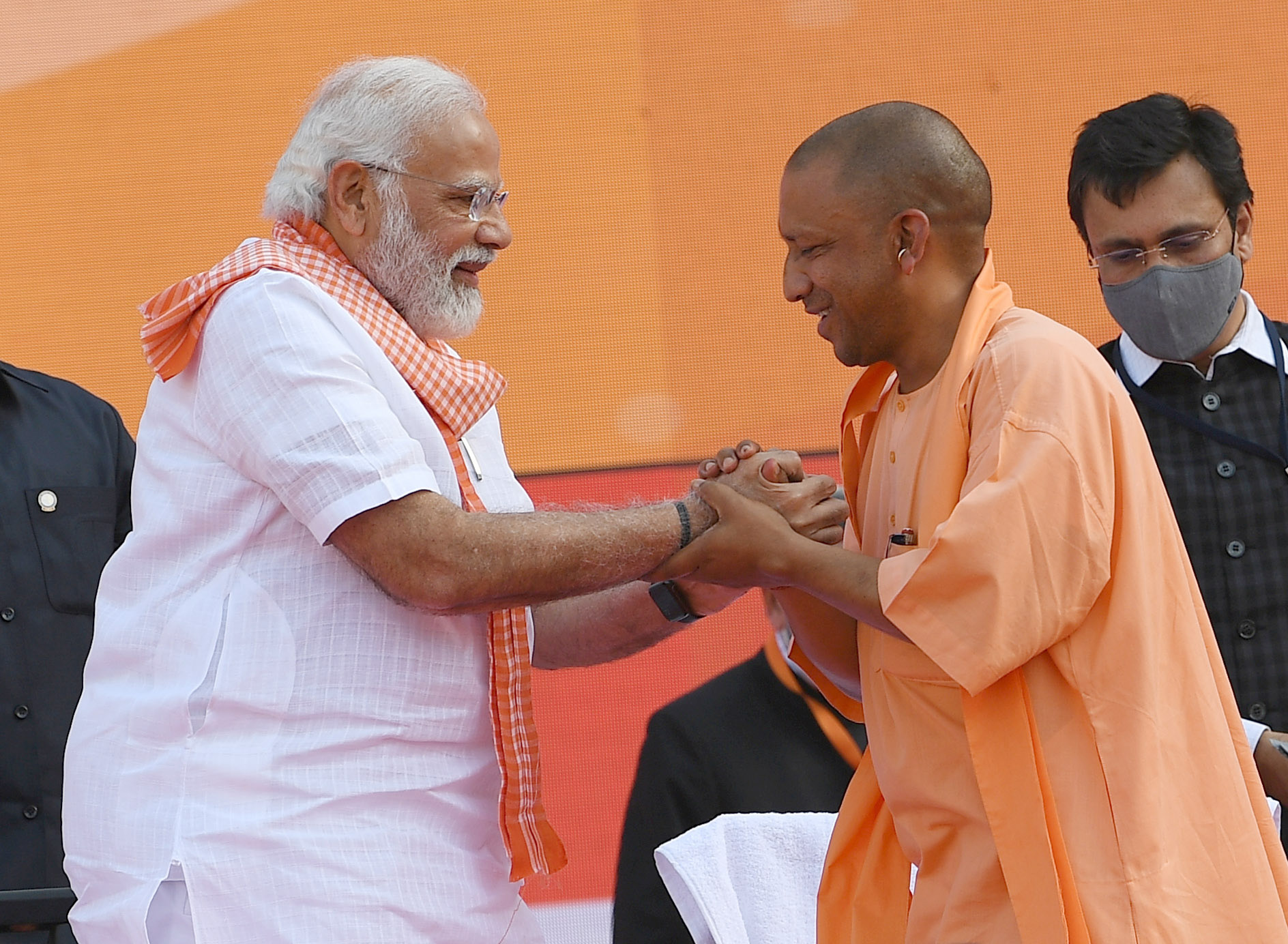 Having become the first UP CM to begin the second innings after completing full five-year term, Yogi has reshuffled the cabinet by dropping 22 ministers of Yogi 1.0 rule. The reig is aimed at striking a regional balance while enhancing prty’s prospects in 2024 general election, reports Mudit Mathur

With the mega fanfair of cheering crowd chanting slogans “Jai Shri Ram-Har Har Mahadev –Modi-Modi–Yogi-Yogi” amid continuous blowing of auspicious “Shankh Sound” (blowing of a conch shell) by saints and sadhus, the saffron robed Yogi Adityanath broke the jinx of re-coronation on the most challenging throne of the chief minister of the largest state of the country after a long interval of 37 years.

During Congress rule, with Narayan Dutt Tiwari as CM of undivided UP in 1985, the state went to election. The Congress won and Tiwari held the post for the second term in a row. Since then, no CM has succeeded in retaining the CM’s chair for a second consecutive term but Tiwari was  not be able to complete full term in his both stints andwas  toppled by Vir Bahadur Singh. Adityanath is the first CM to do so since then.

In a glittering ceremony held at Bharat Ratna Atal Bihari Vajpayee Ekana Stadium in the state’s capital, the galaxy of top political leaders including prime minister Narendra Modi who witnessed the historic event with mammoth overflowing crowds of over 75000, sharing specially designed large podium for oath ceremony. The ceremony was delayed by 17 minutes due to late arrival of prime minister on the venue where his helicopter landed.

The Governor, Anandi Ben Patel administered the constitutional oath of the office and secrecy to Yogi Adityanath and members of his revamped cabinet. Having become first chief minister of the state beginning second term after completing full five years, the cabinet has been given facelift by dropping around 22 ministers of Yogi 1.0 rule.

The new cabinet aimed at striking a regional and caste balance looking deeper for the better prospects in upcoming 2024 general elections for the Lok Sabha when Prime Minister Narendra Modi would be seeking the mandate for his third term. Yogi 2.0 Cabinet gave representation to women, youth, new and old faces but focus was on poll chemistry and caste calculations with regional balancing.

Maximum representation has been given to western UP from where 16 ministers were inducted. This area performed unexpectedly well for the party despite being nerve centre of farmers agitation. Similarly, 13 from eastern, five from central, six from Ruhelkhand, four from Bundelkhand and eight from Awadh were  inducted in the ministry. Caste balancing show 21 ministers from OBCs, eight from scheduled castes, one each from scheduled tribe, Sikhs and Muslims besides 20 from upper castes including seven Brahmins, six Thakurs, five Vaishya and two Bhumihars. The state capital Lucknow had seven ministers in Yogi-1 cabinet which has been drastically reduced to only one as Brajesh Pathak emerged as the strongest contender and powerful Brahmin face rewarded with Deputy Chief Ministership.

Yogi’s new Cabinet comprises 5 women who proved to be politically and socially strong. They include former governor Baby Rani Maurya, Gulab Devi, Pratibha Shukla, Rajni Tiwari, and Vijay Lakshmi Gautam who found ministerial positions in the second innings of the Yogi-led BJP rule. In 2022 elections, a total of 41 women won elections out of which 27 came on BJP ticket. Out of these five women ministers, three belong to Dalit communities and two from upper caste Brahmins.

BJP top leadership rewarded Keshav Maurya who had lost assembly election from Sirathu as he was found to be indispensable for the party due to his contribution in bringimg backward classes to party fold. His efforts to retain them after desertion of Swami Prasad Maurya, Dharm Singh Saini and Dara Singh Chauhan just before the polls were also given due recognition by the party leadership. He is very popular face among party workers and is easily accessible.

The surprising element of the cabinet formation was induction of six new faces who are not the members of state legislature. Their names include the lone Muslim face Danish Azad Ansari, JPS Rathore, Daya Shankar Mishra Dayalu, Narendra Kashyap, Jaswant Saini and Dinesh Pratap Singh. Dinesh Pratap Singh comes from Raebareli from where he is contesting ongoing elections for legislative council.

Uttar Pradesh Election Watch and Association for Democratic Reforms have analysed the self-sworn affidavits of 45 Ministers out of 53 Ministers including Chief Minister from Uttar Pradesh State Assembly 2022. 2 MLC minister namely Sanjay Nishad and Jitin prasada were not analysed due to the unavailability of their affidavits on the CEO website at the time of making this report and the details of JPS Rathore, Narendra Kashyap, DineshPratap Singh, Dayashankar Mishra Dayalu, Jaswant Saini and Danish Azad Ansari were not analysed as they are not currently members of either any house, state assembly or legislative council.

In the recently concluded Uttar Pradesh Assembly elections, the BJP retained power in Uttar Pradesh by winning 255 out of 403 constituencies, securing a 41.29 per cent vote share, while its allies Apna Dal (Sonelal) and Nishad Party won 12 and 6 seats, respectively.