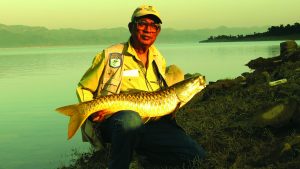 The mahaseers are an iconic group of fish characterized by their large scales, attractive appearance and have long been given the status of “God’s fish”. These were found throughout the fast-flowing rivers of South and South-East Asia. Being the world’s hardest fighting fresh water game fish, these are called “tigers of water”. Unfortunately their future is under serious threat as rivers are getting polluted while tapping for hydro power generation, dams have been build over river, thus blocking water for these fish species to grow. Today it is most endangered specie and is limited to just a handful of rivers.

Mahaseer weighs as much as a small adult human being weighing about 50 to 60 kg, the fresh water giant reminds us of an enigma. During the British regime, several huge sized mahaseers were recorded in many rivers. Subsequently, it lost focus by authorities with many believing that the fish had become extinct. It was refound in 1977 when a Trans World Fishing Team comprising three Englishmen travelled to India and confirmed their existence.

With its distribution having always been limited to the Cauvery River basin, this fish is now believed to be so endangered it may be extinct in the wild within a generation, researchers have said. There are 17 species of mahaseer which populate rivers. Four of these species are already listed as ‘Endangered’ on the IUCN (International Union for Conservation of Nature) Red List.

A paper published in the international research journal Endangered Species Research demonstrates that the endemic humpbacked Mahaseer is now on the brink of extinction having been replaced by non-native relatives (blue-finned Mahaseer) which have been artificially bred and introduced to the river in the name of species conservation, researchers said. The paper alleeges that pollution; poaching (using dynamite and poisons); sand and gravel extraction; low river flows due to abstraction; and India’s continuing thirst for electricity, had resulted in dozens of hydro-electric projects which restrict the ability of fish to migrate to their spawning grounds.

The research suggests that the introduction of non-native Mahaseer has acted as the catalyst which has had a catastrophic effect on the numbers of endemic Mahaseer remaining in the Cauvery river and its tributaries. India’s nearly extinct “’tigers of the water” which have suffered severe population declines in much of its distribution range and declared endangered by the Washington-based International Union of Conservation of Natural Resources due to pollution, habitat loss and over-fishing is thriving at Mahaseer farm at Machhial in Mandi District through artificial breeding in captivity.

The state government is setting up new Mahaseer hatchery-cum-carp breeding unit at Sunni in district Shimla with estimated cost of 296.97 lakh to develop methods of breeding under safe conditions in hatcheries. It will go a long way in strengthening the fish farm infrastructure in the state. Himachal Pradesh has become a stronghold of the Mahaseer fish production in the country which was fast approaching genetic extinction worldwide. An estimated 10-12,000 record highest hatching are expected in an year out of 41,450 eggs produced in this year so far. Around 19,800 eggs, 20900 eggs and 28700 eggs of Golden Mahaseer were produced in the state during the year 2016-17, 2017-18 and 2018-19 respectively. The state has recorded highest 45.311 MT Mahaseer catches in the year 2018-2019 which is one of the finest sport-fish and a source of recreation to innumerable sportsmen both Indian and foreigner. The state recorded Mahaseer production from Gobind Sagar (16.182 MT), Koldam (0.275 MT), Pong Dam (28.136 MT) and Ranjeet Sagar (0.718 MT) respectively in the year 2018-19 respectively.

Animal husbandry and Fisheries Minister Virender Kanwar said that the state government is taking various effective steps like release of 15 percent of water discharge from hydroelectricity power during lean season, conservation of fish through regular patrolling and implementation of close season to promote the fish production in the state. He said the Mahaseer fish is present in around 500 km area of the hill state out of total 3000 km rivers out of which 2400 km constitute general water.

Mahaseer is one of the best sports fish, which attracts the anglers from different parts of the world. It belongs to Tor family and especially two species viz. Tor pitutora has been reported in the state. It is migratory in nature and travels long distance during monsoon upstream in search of ecologically suited place for breeding containing high dissolved oxygen in the water. Despite declared as endangered species, it is found abundantly in the state, which contributes about 10-15 per cent of total catch in the state reservoirs.

Main focus of artificial breeding of Mahaseer is its conservation and ranching of the river system with Mahaseer seed to promote eco-tourism. There are many natural Mahaseer sanctuaries called Machhial in the state water where it is conserved spiritually by the people and department of fisheries also conserve the fish by applying fisheries Act and Rules strongly. As many as six mobile vans are being used in mobile fish markets to market fishes and insulated boxes have also been provided to reservoir fishermen. The state’s water bodies are home to 85 fish species, including Rohu, Catla and Mrigal and Trout, both brown and rainbow. Total 492.33 MT fish has been marketed outside state during last financial year. Bottom line: Loss of species is not gradual. It’s happening fast. Steps are needed to conserve biodiversity. Everything that lives is important. The diversity of life is key to survival and areas of the world that have different kinds of life are the healthiest.