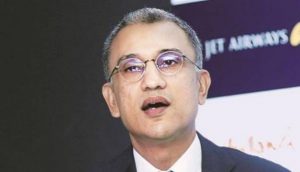 In a regulatory filing, the airline said Dube has resigned from the services of the company with immediate effect due to personal reasons.

Dube had joined the airline as CEO in August 2017.

The announcement of Dube’s exit came within hours after the resignation of its deputy CEO and Chief Financial Officer Amit Agarwal.

The change in Jet Airways’ top management came at a time when the airline owes vast sums to its lessors, suppliers, pilots, oil companies and other parties.

The airline, once the biggest private airline in the country suspended its flight operations on April 17 due to acute liquidity crisis.