He reached Ambala to participate in the huge Mashaal march organized by Haryana Youth Congress at Ambala Panchayat Bhawan as part of Fauj Bachao, Desh Bachbao campaign to protest against Agneepath scheme. He further said that former Prime Minister Lal Bahadur Shastri had given the slogan of Jai Jawan, Jai Kisan, but BJP government has first attacked the interests of the farmers and now the interests of the jawans.

The Rajya Sabha MP warned the government that it should not take steps to ruin the future of the youth and weaken the country’s army. “Just as the government withdrew all the three laws by apologizing to the farmers, it should start by apologizing to the youth, withdraw the Agneepath scheme and immediately start recruitment on 2 lakh permanent posts lying vacant in the army,” he said.

Deepender also said, there are 62 lakh vacancies in the jobs of various departments of the central and state government, out of which 26 lakh posts are vacant in the central government alone. He said, in response to his question in Parliament, the government said that more than 2 lakh posts are lying vacant in the army, recruitments are closed for three years. He also pointed out how the Agrniveer scheme would impact the youth, since till now, every year there were 60-80,000 confirmed recruitments in the army, now there will be 40-50,000 recruitments every year in Agneepath scheme, out of which 75% will be retired after 4 years. In the next 15 years, the strength of the army would be reduced from the present 14 lakh, to half. If the strength of the army decreases, then unemployment will also increase, he added.

Deepender said, a large number of people from Haryana have traditionally been recruited in the army.He said, in Haryana, we have a tradition of serving the country and we are willing to make the supreme sacrifice for the nation, from generation to generation. Hooda said, we make only 2% of the population but make 10% of the army. Hr continued that ssoldiers, ex-servicemen, para-military personnel and their families live in villages in Haryana whereas Agneepath scheme is like a big setback ffor the youth here,

Describing the ill-effects of All India All Classes under Agneepath scheme, Deepender said that in the year 2019-20, about 5000 youths from Haryana were admitted in the army. But after this scheme, now about 5000 confirmed recruitment from Haryana will come down to only 963, in this also after 4 years only 240 Agniveers will be confirmed and 722 Agniveers will be moved out of government jobs. and In this way the ‘Agneepath’ scheme will hit the youth of the whole country including Haryana. 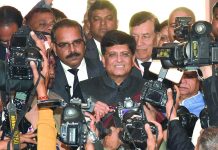