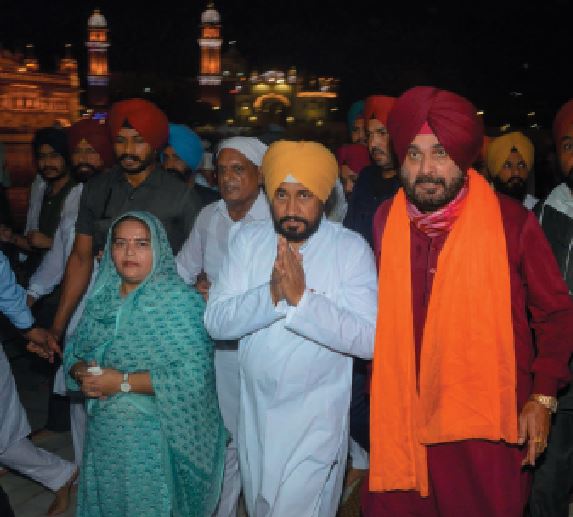 The ongoing power tussle in the ruling Congress in Punjab has only got murkier even though the party high command has given the state its first chief minister fron SC category after Capt Amarinder Singh resigned from the CM’s post following growing bad blood in the party, reports  RAJESH MOUDGIL

Punjab has had its first chief minister belonging to lowest stratum of society, a few days ago in Charanjit Singh Channi who was sworn in as the CM amid a bitter power tussle that divided the ruling Congress in the state with Capt Amarinder Singh and Navjot Singh Sidhu consistently being at loggerheads.

The growing bickering that divided the ruling party in the state and led to the current mess in the party has been evident for the past many months and raged with Sidhu and several other Congress legislators flaying Capt Amarinder Singh’s functioning. The central leadership also held multiple rounds of meetings with them in Delhi in the recent past.

Capt Amarinder Singh’s detractors targeted him for not fulfilling promises made in the 2017 elections, being soft on the Shiromani Akali Dal (SAD) top leaders, and for his over-reliance on a few bureaucrats. The situation worsened when Capt Amarinder Singh also openly opposed the appointment of Sidhu as the state Congress chief earlier this year.

However, the trigger for Capt Amarinder Singh’s resignation came a few days ago when the party high command summoned a meeting of all the MLAs without prior information to him. Coming out in open against the party leadership for the first time, the two-time CM Capt Amarinder Singh said that now he felt humiliated, and resigned. The central leaders went ahead with the meeting with the lawmakers, arrived at a consensus over Channi’s name and he took over as the new chief minister.

Notably, Channi’s appointment is being projected by some leaders as a strategic move of the party to counter the rivals’ attempts to woo SC voters as the SAD has struck an alliance with the Bahujan Samaj Party (BSP) and promised an SC deputy chief minister if elected to power. The BJP has declared that if voted to power, it will have a Dalit CM. SCs  constitute almost a third (32%) of the state’s population (about 3 crore). Elections are due in Punjab in February 2022.

The appointment of Randhawa, a Jat Sikh, and Soni, a Hindu, as deputy CMs, is also seen as an attempt made by the Congress to balance the caste equations ahead of the assembly polls and counter the rivals including the Aam Aadmi Party (AAP), the principal opposition party.

Even though the names of cabinet minister Sukhjinder Singh Randhawa and former party chief Sunil Jakhar did the rounds as the next CM, the selection of Channi surprised many. While Randhawa’s name reportedly did not go down well with Sidhu who saw him as a competitor in the future, many leaders pushed for a Sikh chief minister instead of Jakhar, a Hindu. Punjab has never had a non-Sikh CM since the re-organisation of the state in 1966.

Even after the announcement of Channi’s name, Rawat’s tweet that the upcoming state elections would be fought under the leadership of Sidhu irked many party leaders. Jakhar termed Rawat’s statement “baffling”, and said it could “undermine” the new CM’s authority. The Congress instantly got into damage control exercise, saying that both Channi and Sidhu would be the party faces for the upcoming polls.

Even though Capt Amarinder Singh congratulated Channi, but said in the same breath that he would put up a candidate against Sidhu in the coming polls to ensure his defeat as he was dangerous for the state.

He went on to add that it was sad that Sidhu who could not handle his own ministry, should be managing the Cabinet. Taking a dig at Sidhu, he said that under this “drama master’s leadership’’, it would be a big thing if Congress managed to reach double digits in the elections. Furthermore, he said that Sidhu’s close association with Pakistan Prime Minister Imran Khan could end up compromising the national security.He held that though Channi was intelligent and well-educated, he did not have experience in managing home affairs, which was critical for Punjab that shared a 600-km border with Pakistan. 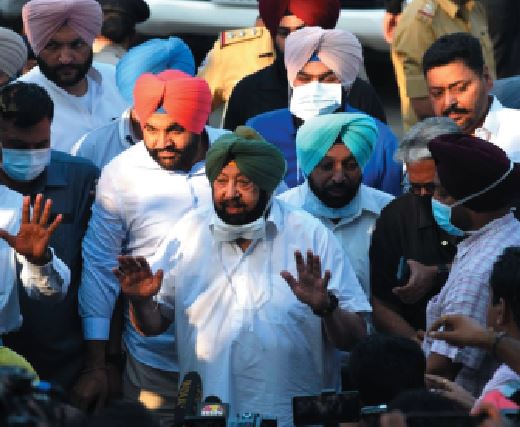 In the 117-member Punjab legislative assembly, the ruling Congress has 80 MLAs, the main opposition party AAP has 20, SAD 13, and the BJP and the Lok Insaaf Party have got two seats each.

The political observers opine that the fissures within Congress are set to benefit the opposition, ready to take advantage of the growing bad blood in the ruling party. The state’s main opposition party, the Aam Aadmi Party (AAP) stands to gain more from it than the SAD-BSP combine. The BJP which has been left by its erstwhile ally SAD is still struggling to get its act together in the wake of ongoing farmers’ protest.

The AAP is steadily getting consolidated in several pockets of the state. It does not have any baggage from the past, unlike the Congress, the SAD, and the BJP, and it is not sparing any of them over farmers’ protests besides other issues, they add.

However, the political observers are also of the view that the AAP which has not been able to offer a chief ministerial face to people so far, also appears to be run by its leaders from Delhi, even though the AAP national convener and Delhi chief minister Arvind Kejriwal has already announced that the party’s CM candidate would be from the Sikh community. While the two-time Sangrur MP Bhagwant Mann appears to be the most popular state leader of the party, the party leadership seems to have some reservations about making him the face of the party and has thus avoided speaking on this issue so far.