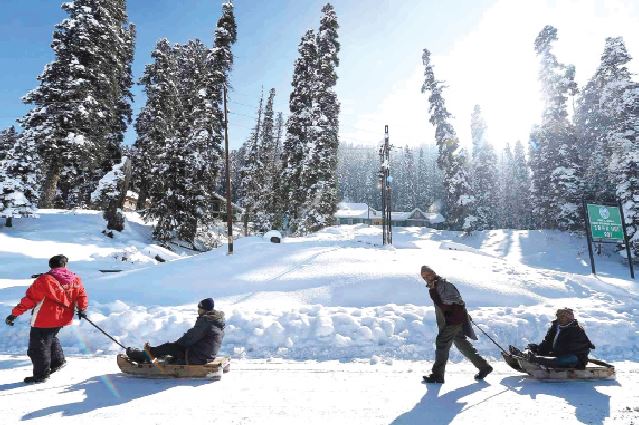 With winter setting in and Kashmir starting to receive snowfall, the local administration is looking forward to revive the stalled tourism activity in the region. And to this end, the tour and travel operators from Maharashtra recently initiated an ‘Unlock Kashmir Tourism Campaign’ with support from the Jammu and Kashmir Tourism Department. Around 70 travel operators along with some writers and journalists from Mumbai visited Kashmir and travelled to many scenic spots.

According to Director, Tourism Kashmir Nisar Ahmad the delegation was brought to the Valley to spread the good word about the region among the aspiring visitors.

“This delegation will become our ambassadors who will bring more tourists to Kashmir,” Ahmad said. “Word of mouth is a powerful tool for promotion and we’re trying to ensure more and more people are reached and brought to the Valley”.

The delegation was headed by one of Maharashtra’s top travel operator Satish Shah. Talking to media, Shah said the tourism in Kashmir “needs a spotlight”.

“The places like Gulmarg and Pahalgam are hidden treasures of this land and we have come to uncover it,” Shah said adding the journalists and writers travelling with them will highlight the scenic beauty of the valley in their write-ups. “This will help in promoting the tourism sector of Kashmir”.

Ever since the revocation of Article 370 on August 5 last year, the tourism sector in the Valley has been in a freefall. On August 3, two days before scrapping of Article 370, the tourists fled Kashmir. The flight followed a government order calling upon tourists and the pilgrims to the annual Amarnath pilgrimage to cut down their visit and leave the Valley within 24 hours.

The Government buses were pressed into service to ferry tourists and pilgrims from across the Valley and rush them to Srinagar airport and bus terminals to facilitate their exit. Within following two days, Kashmir was empty of all the outsiders, something that inflicted a crippling blow on the state’s tourism industry during its peak season. Hotels which until then had enjoyed 80 per cent occupancy turned into ghost houses, among them premium hotels in famous scenic resorts of Gulmarg and Pahalgam whose rooms go for as much as Rs 25000 a night in the peak season.

Tourism sector forms 6.8 per cent of Kashmir’s GDP and employs 2 million people. But the seven month siege following erasure of the region’s autonomy followed by Covid-19 pandemic, the sector is in bad shape. A significant number of people associated with it have either been laid off or are in the process of losing their jobs.

Similarly, there are also around 25000-30000 vehicles engaged with tourism which have no work.

“We don’t know what’s in store for us,” said Altaf Ahmad, a cab driver. ”Future looks uncertain. There’s little hope that we will return to roads anytime soon”.

The number of tourists who visited Kashmir through August to December last year was just 43,000 and from January to September this year, it has been a meagre 19,000, with most of these arrivals before March, the officials have revealed to media. However the good news is that bookings and inquiries by the visitors have reportedly gradually increased over the past several weeks.

Covid-19 pandemic remains a dampener though. With the country bracing for a third wave of infection, the situation could go back to square one. International travel will take a long way to return to normal. This, in a sense, offers tourist places like Kashmir some hope. Indian tourists who can’t visit abroad, can visit the Kashmir within the country.

“Our fingers are crossed,” said Manzoor Ahmad Pakhtoon, a member of KCCI, associated with its tourism wing. “We hope winter brings tourists back but we are also apprehensive about the Covid situation”.