Former Chief Minister of Uttar Pradesh Mayawati on Wednesday said that her Bahujan Samaj Party (BSP) will support the Congress in Madhya Pradesh and Rajasthan, to keep the BJP out of power.

The BSP has won two seats, the Samajwadi Party one, and Independent candidates registered victories on four seats in the 230-seat Madhya Pradesh assembly, in which the Congress has emerged the largest party with 114 seats but is two short of the majority mark of 116. However, the BJP is not far behind, with 109 seats.

Mayawati’s support will take the Congress past the finishing line in both states, where it missed a majority in elections.

While announcing her support, Mayawati said, “we will support Congress in Madhya Pradesh and if required in Rajasthan too, even though we disagree with many of their policies.”

The Congress which wrote to Governor Anandiben Patel late Tuesday night, claiming it has the support of Independent candidates is expected to meet her at 12:00 pm to stake claim to form government. 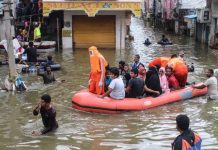