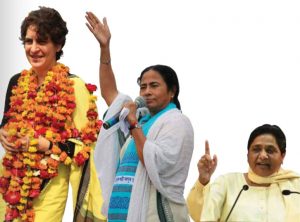 When West Bengal Chief Minister and firebrand leader, Mamata Banerjee made a show of strength at Parade grounds in Kolkata where 20 political parties joined hands and subsequently her ‘dharna’ against the CBI, eliciting support from most of the opposition parties, the message was clear that she has arrived on the political firmament. But the big question remains. Will she be able to pose a serious challenge to Prime Minister, Narendra Modi in 2019? Various pre-general election surveys that sum up the mood of nation suggest that Modi still remains the tallest leader. Any “mahagathbandhan” minus Congress may not cut much ice.

Another scenario suggests that three powerful women leaders-Mamata Banerjee, Mayawati, and Priyanka Gandhi may come between a win and Narendra Modi. These three women leaders thus pose a big threat to the chances of Prime Minister Narendra Modi winning a second term in Lok Sabha elections 2019 due by May.

Mamata Banerjee, who defeated a 34-year-old communist government in West Bengal in an election in 2011, is known for her streetwise political skills and portrays herself as a secular leader in a country.

Then there is former chief minister of Uttar Pradesh, Mayawati, who drew a blank in 2014 general election. However, in recent elections in Madhya Pradesh, Rajasthan and Jharkhand, she has proved that she is a leader who cannot be ignored. In 2014, when her party drew a blank and after the death of her mentor, Kanshi Ram, political leadership had written obituary of her party — Bahujan Samaj Party (BSP). But she has emerged like a phoenix riddle.

In fact, Mayawati is a contender for prime minister. Her tie-up with Akhilesh Yadav’s Samajwadi Party in Uttar Pradesh is a wake-up call for Congress, which was projecting Rahul Gandhi as the prospective prime minister. Her solo fight in Madhya Pradesh, Rajasthan, and partnership with Ajit Jogi in Chhattisgarh was a warning to the Congress.

Mayawati has partnership with Gowdas in Karnataka, Jogi in the Jharkhand, Chautalas of the Indian National Lok Dal in Haryana. In Uttar Pradesh, she has alliance with Akhilesh Yadav and Ajit Singh leaving just two seats for the Congress. Her politics is unpredictable. One safe conclusion one can draw is that with Mayawati joining hands with SP, the next election may not be Rahul Vs Modi but Mamata, Mayawati vs Modi with Priyanka Gandhi queering a pitch. By giving 10 percent quota in jobs and higher education to the upper caste poor months before the next Lok Sabha elections, the Narendra Modi government has played a masterstroke that few among the opposition parties can criticise.

When Mayawati rode to power in Uttar Pradesh in 2007, she demanded reservation in jobs for the poor belonging and her ploy of emerging as the leader of all castes sailed her through. The SP-BSP combine will probably back Mayawati for prime minister in New Delhi, and Akhilesh Yadav for chief minister in UP in the next 2022 state election. That division of power will satisfy the ambitions of both. Their combined share in the 2017 UP state election exceeded that of the NDA in assembly seats adding up to 57 of 80 parliamentary constituencies.

Priyanka Gandhi Vadra, joined the struggle in January when the opposition Congress party made her its face in Uttar Pradesh. Tehelka editorial mentioned this reality that Priyanka Gandhi’s formal entry into politics and assertion by Rahul Gandhi that the Congress will not play on the back foot anywhere. It shows that the grand old party wants to capitalise on the charisma that she exudes. It also wants to capitalise on Priyanka’s resemblance to her grandmother to encash upon Indira Gandhi’s enduring appeal.

Rahul has done well in the recent past but the party was still missing the ‘X factor’ which has been key to its previous electoral victories. Priyanka has been ushered in to end that deficit. The parachuting of Priyanka Gandhi into the 2019 battlefield has caused a flutter with BJP president Amit Shah introducing a new version of OROP or One Rank One Pension targeting Congress president Rahul Gandhi and his sister Priyanka Gandhi.

Former Jammu and Kashmir CM Omar Abdullah retorted with the acronym ODOMOS-Overdose of Only Modi Only Shah. However, Priyanka has a stiff challenge at hand. On the one side is the fully entrenched trios of Modi-Shah-Yogi and on the other the formidable SP-BSP-RLD. While the former has well-oiled machinery to rely on, the latter has proved its mettle in two recent crucial by-elections. Little doubt that this combine left just two seats of Rai Bareilly and Amethi for Congress, considering Congress worthy of as many seats. For Priyanka, it would not be an easy dynastic transition but trial by fire. How the party performs post-Priyanka’s entry would be watched with interest.

Will the shift in the Congress strategy upset applecart of Mayawati and Mamata who were hoping to be major players to make a bid for the PM’s post?  For Priyanka Gandhi, there are roadblocks aplenty and on top of all comes the lack of organizational apparatuses. For sure, Priyanka’s formal entry into politics could help rejuvenate the party in Uttar Pradesh, where it is a marginal player. Coming from what is India’s first family, she could appeal to upper caste voters in the state who typically vote for the pro-business BJP.

A Congress leader close to the Gandhis said she would attract women, young people, and floating voters. Priyanka is far from a political neophyte, having supported her brother and mother during previous election campaigns. She has also experienced political and personal tragedy. The Congress’ victory in three state elections that is Rajasthan, Madhya Pradesh and Chhattisgarh has greatly improved morale, leading some of its stalwarts to predict anything from 120 to 150 seats in the Lok Sabha election. That would enable it to come to power at the head of an anti-BJP coalition being the largest party amongst opposition parties.

Yashwant Sinha, the former finance minister who quit Bharatiya Janata Party last year opines that “the opposition has more powerful women leaders than the NDA, and therefore they will be able to carry conviction with voters generally, and with women voters, in particular.”

The BJP should be worried, especially after the defeat in the three major Hindi heartland states. The entry of Priyanka into the political fray has drawn a gushing reaction from much of the media. There were pictures of elated supporters dancing, a lot of talk of the 47-year-old’s resemblance to her grandmother, former Prime Minister Indira Gandhi, and comments about her connect with voters. That contrasts with her brother, Congress leader Rahul Gandhi, who in the past has been criticised for lacking the common touch.

Mayawati and Mamata are seen consolidating their grip on voters as they have a lot more experience than Priyanka, and both could be seen as potential prime ministerial candidates in a coalition government.

Mayawati, is a 63-year-old former teacher who enjoys base among Hinduism’s lowest castes and the Dalits. The 64-year-old Mamata Banerjee of Trinamool Congress is a firebrand leader and her dreams of capturing the top slot are known to everyone. BSP spokesman Sudhindra Bhadoria said Mayawati has managed a party from scratch to this level.

The important fact is that she has organised large numbers, both men and women, Dalits, other backward castes, the poor, minorities. She is a national leader. The strength of Priyanka, Mayawati, and Banerjee as a potential opposition alliance is that they can appeal to different parts of the electorate.

Encounter breaks out in Jammu and Kashmir’s Anantnag, terrorist arrested