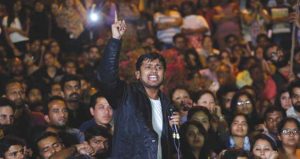 JNU student leader and Azadi guy Kanhaiya Kumar is all set to enter parliamentary politics. He will contest 2019 elections from Begusarai in Bihar. The constituency is presently represented by the BJP. The former JNUSU president belongs to the small backward village of the constituency. He is reported to be extensively touring the area since over a year. People of the area say that he has been a regular visitor, but the frequency of his visit has increased in the past few months.

Obviously, news of his contesting elections has generated curiosity and enthusiasm, particularly among youth across the country for he has come to occupy a special position among the young leaders of the country. Does his entry into parliamentary politics mean something more? Will Kanhaiya be able to infuse any freshness to an otherwise dull political atmosphere of the country? Can he influence the rigidly structured politics in the country where parties hardly allow new idioms or new people to take centre-stage?

For many years now, people in India have been sceptical about political class as a whole and they view new everyone, old or new with suspicion. So, it is but natural that people are questioning and dismissing any high expectation from Kanhaiya. Could we find some hope in him? A close look at his activities certainly gives us some hope that he would be able to prove himself a better politician. He has been showing a high degree of consistency in his assertions and activities. He chooses right kind of issues and acts fearlessly without any show-off. These qualities will certainly help him to maintain the consistency he has been showing all along.

Here, we should not miss the point that he has successfully been transcending his role as a student leader and involving himself in important contemporary agitations. It should also be kept in mind that he is part of ideologically weak organizations like NSUI. He is a cadre of All India Student Federation (AISF) where everyone has to follow a rigid party line. Here, the cadres are supposed to work strictly within the limits of the responsibility they have been assigned. If you are a student leader, you have to carry out the programs chalked out by the party for the benefit of students. They are expected to take up only the issues of students. Any deviation from it may invite punishments which may result in expulsion from the party. In his case, he has to obey the instructions from CPI. There are cases in which student leaders were thrown out of the organization after they were found to be disobeying the diktat of the party. Only a few years ago, a top leader of SFI U was expelled from the organization following his disagreement with the party over some ideological issues. Left parties do not allow you to enjoy the luxury of doing political activities according to your own wishes.

Kanhaiya has been successful in striking a balance between the rigid party line and flexible programs of the agitations he has been participating in. In a very short period, he has been able to carve out space for himself in the mainstream politics without being a rebel in the party. Besides becoming an important name in the student agitation of the country, he is an important figure in the agitations of Dalits and backwards of the country. Despite the fact that mainstream media has covered him widely, it has ignored important aspects of his political manners. This is largely because of its unfamiliarity with the alternative politics in the country.

“We see politics in a very crude manner and that is the reason we fail to realize the significance of the student politics. Most of our leaders come from students’ politics, but they hardly endorse joining students’ politics. This is because they do not want students to do politics independently. This is their selfish attitude. They want us to work as their chamchas. Students’ leaders also choose the same easy path and make themselves subservient to political leaders and end up in entering parliament or assemblies without any commitment for a change in the politics,” Kanhaiya told an audience in Mumbai a few months back. 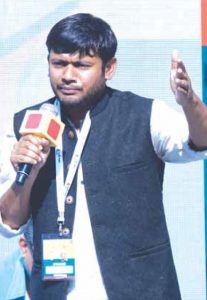 “We must unionize ourselves because it is our right as a citizen. This is necessary if we want to change the composition of current day politics. Leaders should not come from the political class or families; a common ma should have the opportunity to join politics and contribute to the process of changing the society,” he said.

Very few have noticed the subtle change the Azadi guy has brought into the Left politics. He has changed the language of the Left as far as its communication with the masses is concerned. He never uses Left jargons the way it has been used for many years now. After so many years, the Left has found a leader who can speak politics in a non-political language.

He has also been able to associate with the new social alliance that has emerged against BJP-RSS combine. After the co-operation of leaders like Ramvilas Paswan and Ramdas Athavale and Mayawati ’s losing part of their relevance, a new leadership is emerging among Dalits. He is in close association with this leadership. Since the agitation that followed suicide of Rohit Vemula in the Hyderabad Central University, he has been in the forefront of every agitation at campuses. He is, perhaps, the only non-Dalit leader who wields tremendous clout among Dalits. Even Rahul Gandhi is said to be working with him on issues that concern Dalits and youth. He is close to leaders like Jignesh Mewani.

His clout among the new leadership of the mainstream could be seen in his involvement in his associations with leaders like Rahul Gandhi and Tejaswi Yadav. Recently, when it came to be organizing demonstrations at the Parliament Street against the incident of rape in Muzaffarpur shelter home in Bihar, he was specially called by Tejaswi to address it. Other speakers included Rahul Gandhi and others.

However, there are questions which need attention, Can we ignore our recent experiences with the leaders like Arvind Kejriwal. It is yet to be analyzed as to why he threw out all his comrades one by one after ascending to practically, powerless throne of Delhi. If such a small power can go into one’s head, how could we expect considerable power not invading the senses of a young political leader? The mean manoeuvrings applied by Kejriwal against his comrades-in-arms must make people suspicious. But we should differentiate between the backgrounds the two persons come from. Arvind Kejriwal was working with the government and entered into social work through a voluntary organization. We must keep in mind that NGOs are not ideologically driven and they have a work culture that is infested with a high degree of individualism. This is the reason Kejriwal threw out his former colleagues including Prof Anand Kumar, Prashant Bhushan, Yogendra Yadav and Ajit Jha from the Aam Aadmi Party. His other colleagues also left him in due course of time. 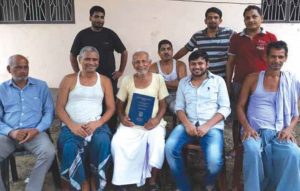 Kanhaiya comes from an altogether different background. He isa hardcore cadre of the Left and has shown no deviation. He is a member of the National Council of CPI and is being seen as an important future o the party. He will fight elections only after his party takes the final decision. Common people are hardly aware of the control exercised by Left parties on their cadres. Public representatives have to deposit their salaries in the party fund and they are given a part of it to spend on their personal needs. Even facilities like accommodation and vehicle is used in accordance with the rules of the party. Many leaders including AB Bardhan spent their lives in one room accommodation provided by the party and died there. These conditions effectively curb individualism.

Moreover, Kanhaiya’s own assertions on the issue are also important. He says that he wants to earn his livelihood on his own and does not to be a politician who survives o the income from politics. “After completing my studies, I am in search of a job. I do not want to make politic the source of my earning,” he told media after the news of his candidacy was broken.

Begusarai is important district of north Bihar. The area has been a Left bastion for many years now. Till few years ago, it was nicknamed as the Moscow of Bihar. It was a center of peasant movement before and after the independence. However, the Left has not been able to maintain its hold over the constituency since mid-nineties. The seat is currently held by Dr Bhola Singh of BJP. A former CPI MLA, Bhola Singh is unlikely to contest owing to his old age and poor health. He is also not in good terms with hiss BJP bosses in Patna and Delhi. Sometimes back, the angry old man had praised Kanhaiya at a public function and termed him as future leader.

The name of RSS ideologue and RSS MP Rakesh Sinha is doing rounds as a possible BJP candidate. His paternal village is just few kilometers away from the village Kanhaiya belongs to. The constituency will witness a fierce ideological battle if Rakesh Sinha is pitted against Kanhaiya. Local BJP people are of the view that even if Sinha does not contest, the elections will be fought under his command. 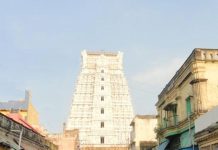