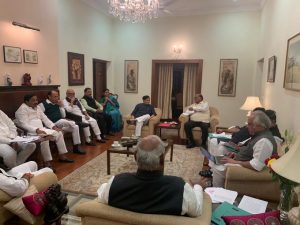 Senior leaders of Congress and Nationalist Congress Party (NCP) met in New Delhi on Wednesday to discuss the common minimum programme (CMP), a road map for the three-party government and power-sharing formula in the state.

After the meeting, in a press briefing, Senior Congress leader and former Chief Minister of Maharashtra Prithviraj Chavan, told reporters that “Congress-NCP has had long and positive discussions and it will continue, I am sure we will be able to give a stable government to Maharashtra very soon.”

Senior NCP leader Nawab Malik said, “Congress-NCP together decided to give an alternate government in Maharashtra and it is not possible without NCP-Congress-Shiv Sena coming together. We are trying our best to resolve all issues and will soon provide alternate government.”

After meeting PM Modi, Sharad Pawar in a tweet said, “Met @PMOIndia Shri. Narendra Modi in Parliament today to discuss the issues of farmers in Maharashtra. This year the seasonal rainfall has created Havoc engulfing 325 talukas of Maharashtra causing heavy damage of crops over 54.22 lakh hectares of area.”

“To take a stock of this unprecedented situation and address the concerns of distressed farmers I had visited Nashik and Vidarbha in first half of November,” Pawar added.

“This year the returning monsoon devastated almost every standing crop in major parts of Maharashtra. I brought to notice this alarming situation to the kind attention of Hon. PM.” said, Sharad Pawar.

At the beginning of the Winter Session of Parliament, PM Modi had praised the NCP for strictly adhering to parliamentary norms, which raised various speculations about the NCP and BJP forging alliance for government formation in Maharashtra.

Sonia Gandhi had also met party’s senior leaders on Tuesday to discuss the political situation in Maharashtra and the way forward. 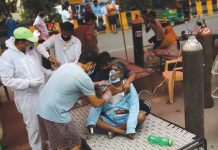