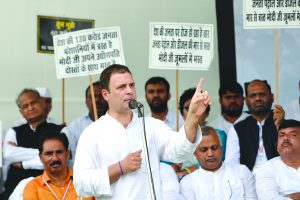 When Congress. with support of many opposition parties, protested against petroleum price hike, what surprised everyone was the presence of Rajya Sabha member Sanjay Singh, who is a senior leader of Aam Aadmi Party. That was enough to spur whispers in corridors of power about a possible tie up between the Congress and AAP in Delhi, Haryana and Punjab where Aam Aadmi Party has considerable clout.

Analysts point out that Congress and AAP have kept all options open and an alliance can’t be ruled out. Though in Delhi all the seven seats of the Lok Sabha had gone to the BJP during the 2014 elections, the AAP came with a thumping majority in State Assembly winning 67 of 70 seats.

Similarly in Punjab, out of 13 Lok Sabha seats, the AAP had won four seats. Haryana has 10 Lok Sabha seats and together Punjab, Haryana and Delhi account for 30 Lok Sabha seats. It is a considerable number and the Congress and AAP can’t ignore this. Though Ajay Maken, the Delhi unit president of Congress, the Punjab Chief Minister Capt Amarinder Singh and Haryana Congress Party are not in favour of an alliance, in politics nothing can be ruled out.

Speculation is rife in political circles that Congress wants to stitch a Bihar-like Grand Alliance or Mahagathbandhan against the BJP. The party has already started ‘informal’ talks with AAP. Congress leaders Jairam Ramesh and Ajay Maken reportedly met AAP representatives sometime back to take forward the idea of an anti-BJP front.

The big question is Can Rahul Gandhi swallow his pride and treat AAP as an equal partner? Is Congress willing to meltdown with an eye on 2019 general elections?  It is still not clear whether Congress president Rahul Gandhi has given a green signal to the party to work on the alliance with the AAP.

Speculation was also rife that the AAP offered the Congress a 5:2 ratio for seat sharing in Delhi – five seats for the AAP and two for the Congress. However, the Congress is insisting equal partnership means at least three out of the seven Lok Sabha seats in Delhi.

Another question is if bitter rivals can become allies? The speculations about the rumoured alliance got a further boost after Delhi Chief Minister Arvind Kejriwal sometime back praised former Prime Minister Manmohan Singh on Twitter.  “People missing an educated PM like Dr Manmohan Singh,” he tweeted.  Kejriwal had openly criticised Manmohan Singh in the past.

Another tweet by Delhi chief minister Arvind Kejriwal slamming Prime Minister Narendra Modi for his lack of education and the response it elicited from Delhi Congress chief Ajay Maken also triggered animated discussions in political corridors in the capital, the power centre of country.  It is worth mentioning that Kejriwal had shunned tweeting against Modi for quite sometime and his sudden outburst through a tweet indicated more than what it seemed.

The Congress and the AAP had always shared love hate relationship. AAP’s tirade of anti-corruption was against the Congress but to form the government for the first time in Delhi when it could not muster numbers of its own, it had to take the outside support of the Congress party, which was the prime target of his attacks earlier.

To ensure no division of votes, the Congress-AAP alliance may be formidable. In Punjab where AAP came out as the second party after Congress in Assembly election, it relegated Shiromani Akali Dal to third position.  Though during election, Captain Amarinder Singh while dismissive of AAP, the results show that AAP can’t be taken lightly.

The regional poll arithmetic would be in keeping with the national picture, where a grand alliance of opposition parties is taking shape to take on Narendra Modi-led BJP.

In Punjab in particular, the possibility of AAP entering into an alliance with Congress to take on the BJP in the 2019 Lok Sabha elections may revive the former’s poll prospects opine senior party leaders. Speculations about a possible tie up were triggered by a tweet sometime back by the party’s Delhi leader Dalip Pandey, confirming that many senior Congress leaders were in touch with his party. AAP leader from Punjab Sukhpal Singh Khaira had said that he was not against such an alliance to take on the BJP in next general election.

Sources in AAP, say that most party leaders would be comfortable with such an arrangement if it brightens their chances of victory having a rerun of the 2014 performance, when AAP managed to  get four Lok Sabha seats in Punjab. “Even if Congress spares five of the 13 seats for AAP, it will be a good deal”, opined a AAP leader from Punjab.  For record the Congress-AAP vote share in Punjab during the Assembly poll was much more than BJP-SAD share. Naturally the AAP-Congress alliance would be unbeatable and it would be difficult for the SAD-BJP to wrest Punjab again.

AAP’s fortunes have been dipping in Punjab. After winning 20 seats in the last assembly elections, it lost six elections, including four corporations, Gurdaspur Lok Sabha bypoll and  then Shahkot assembly by-election. Many in the party see 2019 as the only chance of revival in Punjab.

AAP and Congress joining hands to take on the BJP and Modi in 2019 may not be surprise news. When BSP and SP formed an alliance and shared a stage after the bitterness between Mayawati and Mulayam, it brought results and the alliance won even from Gorakhpur, the constituency of Chief Minister, Yogi Adityanath which at sometime seemed an impossible task.

Mamata Banerjee’s fondness for Kejriwal is well known and she may play a key role in forging this alliance. Many in AAP say that there can be no understanding with the Congress till Maken remains the Congress party’s Delhi president. For days together there had been rumours that Maken may be asked to quit. There was also speculation that Yashwant Sinha, the estranged BJP leader may be accommodated by the AAP in Delhi.

Some in the Congress camp also say that Maken is hurting the party’s prospects. For instance before the symbolic fast that was to be led by Rahul Gandhi in Delhi, a photo of Ajay Maken eating chhole bhature at a dhaba had done immense harm to the event.

Sheila back in Delhi

Congress President Rahul Gandhi has already brought in former chief minister, Sheila Dikshit back in the Delhi unit as he feels that she would be needed to ensure a Congress win.  Sheila Dikshit is considered best bet of Congress in Delhi. All these developments also confirm that there is more than what meets the eye. It is only a matter of days when this alliance between Congress and AAP comes out in the open. So as they say anything can happen and in politics, there are no permanent friends or foes but only permanent interests.  Indeed politics makes for strange bedfellows!