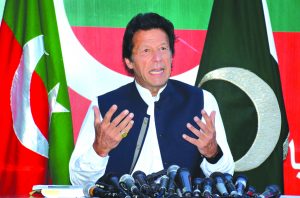 What the army in Pakistan has been aspiring for after then Prime Minister Nawaz Sharif was found to be too inconvenient to be allowed to run the government because of his independent style of functioning, particularly in matters of foreign and defence policies, has become a reality. Nawaz, who had launched a drive to keep his country’s armed forces away from the political power structure with a view to allowing democracy to strengthen its roots, has been shown the door with little chance of revival of his political career.

In this task, the army got considerable backing from the judiciary, which unseated Nawaz from the powerful position he had acquired through the democratic process. The PML(N) leader, barred from having any public office for life, has to languish in jail for 10 years with his charismatic daughter, Maryam, too, having been imprisoned by Pakistan’s anti-graft body, the National Accountability Bureau, for seven years and this may prevent her from throwing any serious challenge to the army-backed Pakistan Tehreek-e-Insaaf (PTI) government headed by cricketer-turned-politician Imran Khan.

However, what is more interesting is that the new Prime Minister is likely to attempt to do what Nawaz had been preparing to accomplish, but without taking the all-powerful army into confidence. Nawaz was believed to be looking for ways to promote India-Pakistan trade relations, and India would have welcomed it. This is what Imran Khan may also do as he has been indicating despite talking of Kashmir. Such a policy shift was not tolerable by the army earlier, whereas this may be welcome now because the people of Pakistan have hinted that they want their country to accord primacy to economic issues.

A new environment involving India and Pakistan is likely to be created with Prime Minister Narendra Modi having made a phone call to Imran Khan to greet him on his victory in the elections and Imran inviting his friends of the cricketing days like Sunil Gavaskar, Kapil Dev and Navjot Singh Sidhu to his swearing-in ceremony as Prime Minister.

With the BJP-led NDA government in India and the formation of an army-supported ministry in Islamabad is an ideal situation to go ahead with an agenda for improving India-Pakistan relations. Though India is soon going to get into an election mode, that should not make much of a difference. Developing stakes in bilateral trade suits both countries. This approach will help the Pakistan army too to acquire a people-friendly face, which it desperately needs after its past operations harmed tribal interests and clandestine moves against Nawaz Sharif.

Though nobody can say with certainty that the Imran Khan regime in Islamabad has this point in its agenda, he gave sufficient hints in his victory speech for trying to improve relations with India — “If India takes one step forward Pakistan will take two steps” to achieve this laudable objective. Of course, only time will tell whether Imran behaves as he has promised.

In any case, most people in Pakistan want their government to focus on spurring economic activity so that there is an improvement in their quality of life. This is being seen as one of the major factors behind the extremist-led parties and others opposed to normalisation of relations with India getting a good dressing-down from the electorate in Pakistan’s July 25 general elections.

The vote share of these parties, all put together, is less than 9 per cent  whereas in the 2002 general elections, the Muttahida Majlis-e-Amal (MMA), an impressive conglomerate of mainstream religious parties,  secured around 11 per cent votes. The only extremist party which has shown remarkable achievement is the Tehreek Labbaik Pakistan (TLP), the fifth largest group in terms of vote share. The TLP is slightly behind the MMA. The TLP has its support base among the Barelvis, opposed to Wahabis and Salafis, and has emerged as the new favourite of those having a strong religious orientation because of its having eulogised then Punjab Governor Salman Taseer’s killer, Mumtaz Qadri, his own security guard, executed for the crime he had committed.

The position of religious parties is not as strong as it was in 2002 when they captured power in Khyber-Pakhtunkhwa (KP), a province dominated by Pashtu-speaking tribal people. The electorate this time has given these parties a humiliating treatment not only in KP but also in Punjab and Sindh. By rejecting these parties the voters have sent across the message that they are for positive politics with a view to promoting economic growth and peace so that joblessness disappears not only from Pakistan but also from the rest of South Asia.

The people in general would, perhaps, prefer their leaders to give a serious thought to the cause of banishing poverty from the region, home to a large number of the world’s poor.

The global financial crisis and other factors like the war in Afghanistan and the activities of extremists have impacted Pakistan’s growth considerably. As in the case of India, poverty in Pakistan has been more widespread in the rural areas than in the cities. Imran’s speeches show that he is conscious of the fact that this needs to be given top priority.

According to one estimate, poverty rose sharply in the rural areas in the 1990s and the gap in the incomes between urban and rural areas became more pronounced.

Khyber-Pakhtunkhwa, which now includes the Federally Administered Tribal Areas (FATA), has been one of the most backward regions of South Asia. Known for harbouring extremists and terrorists, the people there seem to have realised that they today need only peace and economic development so that there are more job opportunities for the ever growing unemployed population of youth. That is why they have pinned their hopes on the Imran Khan-led PTI.

The voters’ preferences indicate that people in every province are sick of destructive activities in the name of religion. There appears to be a strong desire among the people that the government in Islamabad as well as in the provinces should launch mainly growth-oriented programmes.

The people have tried the PPP, founded by the late Zulfikar Ali Bhutto, who projected himself as the messiah of the downtrodden, Nawaz Sharif’s Pakistan Muslim League, promoting itself as a well-wisher of trade and industry, and the MMA of the mainstream religious parties, and found their performance highly disappointing. They have now shown confidence in a comparatively new party to implement the promises it has made to the people — mainly to take care of people’s economic difficulties.

The success achieved by Imran Khan’s PTI in KP proves that exploiting people’s sentiments in the name of religion is no longer possible when there is a general cry for focusing on poverty-alleviation schemes. The following words of Imran must have gone down well with the electorate, “The biggest challenge we are facing is the economic crisis … we have never had such a huge fiscal deficit. All of this is because our economy is going down because of dysfunctional institutions.”

The new government’s efforts for a bailout package from the IMF may not bear fruit so easily as the US seems to have turned its back on Pakistan as a pressure tactic to eliminate terrorist outfits from that country. There is the possibility that the new government may ignore the US coercive method as countries like China, Russia and Saudi Arabia appear to be forthcoming to help Pakistan out of the economic quagmire in which it finds itself today. This factor may impact Islamabad’s India policy too.