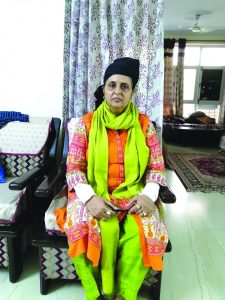 Meenu Sharma is knocking every door and had even tried to meet Prime Minister Narendra Modi when he visited Sultanpur in Gurugram district in November last year, but was prevented , thrashed and beaten up by the policemen.

Gurugram-based businessmen Vinod Sharma had committed suicide by firing two shots from his licensed revolver in his Gurugram office on July 4, 2018. He was immediately rushed to Artemis Hospital, Gurugram, where he succumbed to injuries on July 7. Meenu has alleged that on July 4, 2018, investigating officer Sandeep Kumar had visited the hospital and had inquired from her the reason for firing.

Meenu Sharma reportedly told Sandeep Kumar that her husband had fired shots to himself due to undue pressure built up by Mr. Mohinder Singh Sethi, the then DCP Manesar in Gurugram district, for demanding 3 crores 26 lakh in lieu of 2 lacs taken from him as loan for the land which Vinod Sharma had purchased in New Palam Vihar for an aggregate value of 12.5 lacs in the year 2005.

Although in his suicide note, Sharma had mentioned Devinder Lakra, a Delhi based businessman, as responsible for forcing him for committing suicide but his wife Meenu has reported to the Police accusing Mohinder Sethi, for pressuring and torturing her husband which had forced him to commit suicide. Meenu has alleged that two days prior to suicide, Mohinder Sethi and three others, including Sethi’s brother Bittu Sethi had come to office of her husband and had forced him to sign a paper that he owes 3 crores 26 lakh to Sethi. Meenu has alleged that one person whom Mohinder Sethi was referring as uncle had written the letter.

At present, Special Investigating Team of Crime Branch of Haryana police — comprising DSP Mahavir Singh and ASI Dalbir Singh — is looking into the case. However, Meenu insists that since there is an involvement of a senior police officer, the case should be handed over to the CBI.

Musafir, a friend of Vinod Sharma was reportedly present in the office of Sharma when Mohinder Sethi along with three others including his brother Bittu Sethi, had visited his office two days prior to his suicide.

Meenu has alleged that Sethi had threatened that 50 lakh should be paid on July 4 and rest of the money in two instalments within forty five days.

Musafir, on his part, confirmed that his Polygraph test was conducted and he had told that in his presence Mohinder Sethi had forced him and Vinod Sharma to sign the letter that Sharma owes money to him. Musafir said that during test he told that he had no enmity with Mohinder Sethi, adding that he had even attended his son’s marriage.

Mohinder Sethi neither responded to SMS messages of Tehelka nor responded to call made to know his version about the allegations of Meenu Sharma..

Meenu has filed a writ in Panjab and Haryana High Court demanding CBI. However, the apex investigating agency’s counsel has submitted in the court that it has limited manpower and resources and it is already overburdened with the investigation of the cases registered by it under its original jurisdiction as well as investigations entrusted to it by various High Courts and Supreme Court. “Moreover the case is local in nature and does not involve interstate or international ramification and if the court deems it appropriate it could be investigated by SIT consisting of senior police officers,” the counsel said.

Haryana police has submitted that it was investigating the case without any presser from any quarters.

RK Sharma, a retired IFS officer of Haryana and social activist, said the case, if investigated honestly, will reveal more dubious details than what meets the eyes. It could be case of Benami investments or a case of extortion network at the level of senior police officers.