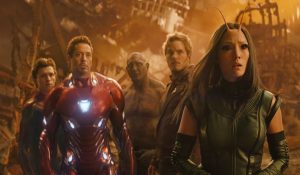 Arushi Sinha, an XI standard student and upcoming blogger from Mumbai, is rushing back home from a late evening movie show of Avengers Infinity War. As academic pressures and class work piles up, getting to watch a film in a theatre inclusive of the time taken to travel and factoring in a long intermission is not easy.

“If I ever get to choose to spend some money and treat my friends to the movies, I would definitely choose Avengers Infinity War, or another Hollywood film, over anything in Hindi. These films are entertaining, and the standards of Bollywood have really fallen! We recently watched October, but came away disappointed. A big Hollywood film is always more worth it,” she said.

Arushi has encapsulated the tectonic shift that has happened in Indian movie theaters. The big Hollywood spectacle film now emerges as a winner in India. Such films rarely spend money on publicity in the Indian market, but draw in hordes of audiences. When they choose to dub in Hindi or regional languages, they also get vernacular speaking viewers. Primarily, though it’s the 18 to 35 urban citizen driving major businesses to Hollywood spectacle films in India. Avengers Infinity War, a phenomenal film has established a change that highlights a permanent shift in preference for Hollywood movies among the Indian urban moviegoers.

Avengers Infinity War has grossed over Rs.246 crores in less than a fortnight since it’s release. Seasoned trade analyst Taran Adarsh, calling the film a ‘marvel’ in the Indian box office, has reiterated that it’s unprecedented success sets a new benchmark for Hollywood films and their increasing reach with Indian audiences. Having released in just 2000 screens, which is about half as wide as a big Hindi film, this Marvel superhero spectacle is easily set to be the biggest Hollywood film in India ever, beating Jungle Book and Avatar. Prior to this one, Jungle Book, Disney’s innovative animation meets live action film made an approximate 188 crores gross in 2016.

That the Indian moviegoer increasingly opts for a spectacle Hollywood film in a theatre today is evident from recent successes that such films have registered. In terms of releases, Spiderman 3, Avengers Age of Ultron, Avatar, Jurassic World, Furious 7 and 2012 have made over a 100 crores. Each of these films have released in less than 1500 screens initially. With audience interest picking up swiftly, exhibitors across India have added the number of screens showing these films- either in English, with subtitles or in dubbed Hindi and regional versions. Their strongest appeal is word of mouth positive publicity from viewers.

Nupur Singh Riat, a senior digital marketing professional always chooses a Hollywood film in theatres over a Hindi film. She explained why this shift in viewing tastes occurred for her and her contemporaries. “Internet penetration and better speeds have ensured that we now have a substantial market that streams subtitled content and are consuming American content more than ever before. So, they relate to Hollywood movies now and their fandom is increasing every year. Secondly, these movies- be it around superheroes or fantasy adventures- are spectacles that people don’t mind paying high multipleprices for…. And Bollywood honestly has miles to go in the VFX department. Our best – Krish and Ra One, seem insufferable when you know you have a Black Panther that will blow your mind with its extravagance and narrative”.

As audiences catch up on updates about films and TV online regularly, they also decide on watching a film depending on the buzz around it.

Naomi Datta, an independent media professional who has worked on Hindi film projects often, watches both Hindi and English films. She explains the current trend of Hollywood over Hindi films as, “India has a thriving local film industry that is following a global pattern of movie consumption (today). A young person has a diverse viewing palate to choose from thanks to streaming platforms like Netflix and Amazon Prime. A movie experience has to be worth the trek to the multiplex and the price of the ticket. It also has to be an experience, which cannot be replicated on your phone, laptop or TV set. Which is why when something as spectacular as Avengers comes along, going to the movie theater is non negotiable. In the process, you could decide to skip films you know you can catch up with later on a streaming service… I have watched the last few Hindi films on a streaming service because I have that option (to defer or postpone.) Unlike Avengers where there is a big FOMO (Fear of Missing Out) factor as well.”

Datta raises a valid point- that of ticket prices and the cost of a trip to a cinema. Akshay Rathi, a leading exhibitor adds, “If you tally the costs of buying a ticket, the commute, food and beverages, watching a film at a multiplex theatre every week is not an option for the average Indian person anymore. This is our Netflix generation that is well versed with English, and familiar with Western culture, language and access isn’t a barrier anymore. They will always choose that which promise a larger than life, immersive experience in theatres. Avengers Infinity War definitely becomes a top preference. Similarly, Bahubaali– despite being dubbed in Hindi saw young audiences flock to theatres as the film offered an entertaining experience. Audiences now clearly seek entertainment and quality. Sonu Ki Titu Ki Sweety for instance, didn’t boast of any A List stars or a big recognized director like Rajkumar Hirani or Karan Johar or Rohit Shetty. Yet the film did business beyond expectations and stayed on in theatres.”

Rathi explains that films like a Furious 7, or Jurassic World offer a larger than life thrill experience for the entire family, making the money spent at a multiplex more worthwhile for everyone. As a result, families tend to spend money on such Hollywood ‘event’ films together. Kamal Rukh Khan, a mother of two young children explains, “my kids wait for the big summer releases and Holiday films from Disney. So even if I would want to watch a smaller Hindi film, I prefer to take them out first. So a film like Jungle Book, or Jurassic World, becomes our first choice. They are quite engaging, so I don’t mind watching them either.”

Sidharth Thyagarajan, a Delhi based policy adviser, tried to catch Avengers Infinity War at an IMAX theater for a greater immersive experience immediately upon its release. Watching a new Hollywood film on the day of its release gives a thrill to this avid movie buff. He said, “Accessibility is a big factor helping with this shift. It was not like we didn’t watch these movies earlier, but it was mostly about waiting for high quality prints to be available online which would start a game of tag with a USB or a CD from a friend who manages to download the version… The fact that a number of Hollywood movies get an Indian release on the same date has definitely helped….I watched first Iron Man Movie 10 years ago and it’s fascinating to connect with how the characters have evolved as we’ve grown up.”

Even though Avengers Infinity War, or Spiderman, or Jurassic World are films primarily driven by impressive special effects, the stories they tell are convincing and developed. In Hindi films, most of the money while making a film is spent on a star, and not on developing the story with solid believable writing. In this department, regional cinema has emerged strong, as have smaller independent Hindi films.

Audiences connect to their stories and characters. Love Per Square Foot , the first Netflix original Hindi film, has won huge audiences on the streaming giant, as the film got very positive word of mouth responses. Regional films too continue to draw young audiences. For instance, Thyagarajan follows Hindi films too, but is more avidly connected to Tamil cinema- his native language. With a range of mass entertainers to intelligent, well written stories, Tamil films have been cutting edge. Thyagarajan would catch a good Tamil film at a multiplex unhesitatingly. Be it Sairat in Marathi that is now getting a Hindi film remake by Karan Johar’s Dharma Productions or Belasheshe in Bengali, or Mission China in Assam, regional films are garnering audience interest across their native speakers.

Wreek Kundu, a student of mechanical engineering and an illustrator from Vadodora, explained why he chooses Bengali films and Hollywood above all else. “Regional films appeal more to viewers because often, they can associate with characters and situations in their native language and in a particular region. Portrayals in these films are easy to relate to than Hindi film stereotypes. Hindi films have not been able to create a lasting impression of an Indian superhero. Bollywood hasn’t been able to fully get past their standard profile of films- a hero, a heroine, a villain, songs and a romance dominating the story line. Compare that to big Hollywood films whose complexity and the element of thrill offer something new every time. For instance, Christopher Nolan’s Inception and Interstellar are as complex as they are imaginative and that attracts the viewer as they involve not just seeing but thinking as well.”

Wreet’s astute observation- about a Hollywood film that can involve a thinking viewer with it’s story- is resonated by Rathi’s observation. As a leading exhibitor he observes, “Amongst the young stars in Hindi films, only two – Varun Dhawan and Ranveer Singh- can assure that a film gets a decent opening in theatres. The rest fail to draw in audiences unless the film itself looks promising. Audiences are choosy about where they spend their money these days, so Hollywood films come across a complete package of entertainment.”

Given the changing landscape in the consumption pattern of Indian entertainment, where young audiences with spending power can choose from a wide array of international films, Hindi films must work on improving content and spruce up productions. Big scale Hollywood films bring immersive experiences and with dubbing, access to such films has grown exponentially. If Hindi cinema, the mainstay of Indian multiplexes, has to sustain, it must go beyond tropes of stardom. Otherwise, big-budget Hollywood is here to stay in India.