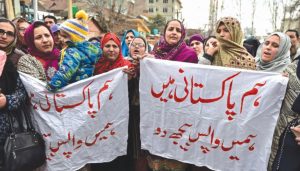 This group of women in Kashmir occasionally holds protests in Srinagar, the last such protest was held on February 3 on the eve of the Prime Minister Narendra Modi’s visit to the state. Their demand: “send us back to our families in Pakistan and Pakistan Occupied Kashmir”.

The women came to Kashmir in the years after  2010 as part of the rehabilitation policy announced by the then state government for the Kashmiri youth who had crossed over to Pakistan or PoK for arms training and wanted to return to a normal life in the state. These women are the wives of these former militants. In their protest they carried banner which read in Urdu “We’re Pakistani. Send us home”.

They complain they are being treated like criminals in Kashmir even though they are not infiltrators or intruders. One of them Kubra Gillani, 27, who hails from Domel area of PoK has been divorced by her husband Muhammad Altaf Rather.

Around 450 youth had returned, many of them with their wives, under the rehabilitation policy. The state government had opened “channels” for them to return without arms and resume normal life. Government had selected four entry points — Poonch-Rawalakote (Poonch), Uri-Muzaffarabad (Uri), Wagah (Punjab) and Indira Gandhi International Airport, New Delhi from where the youth could  enter the state following necessary clearance. But after the 2014 takeover of the  BJP government at the centre, the plan was all but shelved. This, despite the fact, that the then Chief Minister Mehbooba Mufti  who headed a coalition government with the BJP had suggested “legalising Nepal route” for those Kashmiri youths who have now shunned the path of violence and wished to return to their homes.

But the wives of these youth have since been disallowed to return to Pakistan and PoK, even on an occasional visit. They complain of having no travel documents and also that their children are not being admitted in local school as they hail from the other part of Kashmir.

There are women like Shahnaz and Raheela who are without documents and can’t visit their families.  In case of Shahnaz, her father in PoK passed away two years ago, but she says that she learnt about it one year after the death.

“Now my mother is ill,”  she says and I can’t even go. Shahnaz is also concerned about her ailing husband Mohammad Yusuf Bhat. “What will happen to me if something happens to him”.

But this is a fate that has already befallen Sumaira who lives in Shopian. Sumaira and her two sons and three daughters were denied the share in property after her husband’s death. She got it only after the villagers intervened on her behalf.

Also, many of these women live in miserable conditions after being divorced by their husbands. This has left them without any property and documents. According to an estimate, around fifty of these women have been divorced by their husbands. One of them is Posha who lives at Handwara in a rented room with her three children after being divorced by her husband Abdur Rashid. She has now approached the office of the office of Muslim personal law board to plead her case.

The women have approached Kashmir’s grand mufti Nasir-ul-Islam to seek his intervention on their behalf. So far, seven divorced women have approached Mufti Nasir which has left him worried. He has urged the state government to consider the cases of these women on compassionate grounds. He wants the government to either send these women back to Pakistan or rehabilitate them properly “as envisaged originally under the rehabilitation policy”. 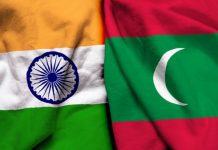