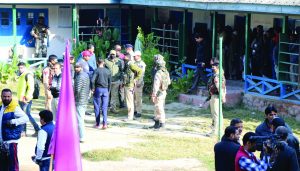 On October 10, Abdul Hamid and his wife Zubaida of the Batamaloo locality in Srinagar left their home at 5.45 am when it was pitch dark outside. Their face covered with a muffler, they silently made their way to a nearby polling station to cast their ballot in the second phase of the Valley’s civic polls. By around 6.15 am both were back home. None of their neighbours saw them and this is what they wanted. It saved them both from the social stigma attached to voting in the polls in Kashmir and also from the possible wrath of the militants who have warned people against participating in the exercise.

“It was dangerous to vote. But I decided to go for it as I wanted my candidate to win,” Hameed said.

But despite the risk undertaken by Hameed, barely one per cent of people exercised their franchise in Srinagar. There was a meagre polling in other parts of the Valley too. Only exception was the North Kashmir township of Sumbal where around 30 per cent of people cast their ballots. Still the average per centage of polling in Kashmir Valley for the first phase was a no more than 8 per cent.

The decision to start polling at 6 was taken after a paltry 10 per cent of people voted in the first phase. Government expected that the more people will be encouraged to vote under the cover of darkness. But it still didn’t work – albeit it did help the per centage lift by a few infinitesimal per centage points.

Kashmir Valley recorded just three per cent voter turnout as parts of Srinagar and  Anantnag  witnessed a near-total boycott of the electoral exercise.

Srinagar Municipal areas of Batamaloo and Habba Kadal assembly segments recorded barely 2.3 per cent  turnout, according to official figures released by the CEO  evening. In the 2014 assembly elections, these two constituencies had recorded more than 20 per cent turnout.

The story of southern Anantnag town was no different as the polling per centage within its municipal limits stood at 1.1 per cent, much lower than Srinagar, at the end of the voting time.

One thing that stands out is that the civic polls have been predominantly boycotted in Valley, if not in Jammu and Ladakh regions. And this is something that hasn’t happened in the Valley since 1996 when Assembly elections were held first time after the outbreak of the armed separatist movement in 1989.

Interestingly, there was overwhelming participation in Assembly polls held immediately after the mass unrests of 2008 and 2010. In fact, more than 80 per cent of the people cast their ballot during Panchayat polls held in 2011,  defying Hurriyat boycott call. This was stunning considering only a few months ago, the Valley had witnessed a five month long separatist revolt in which 120 youth lost their lives.

Only exception to this rule was the last year’s Srinagar parliamentary by-poll when not only did people largely boycotted but the exercise was also resisted, leading to killing of eight people. And that too in central Kashmir’s Budgam district which has largely been peaceful over the past decade.

Writing about the boycott of the polls, a local English daily termed it “a profoundly telling development”.

“If anything it starkly shows how the policies of the BJP-led government have completely alienated Kashmir,” an editorial in Kashmir Observer said. “Four and a half years is a long time for a policy to bear fruit. And if we go by the current situation, the Doval Doctrine has only ended up deepening the disaffection in Kashmir. Never before has the gulf between the government and the people widened to such an unbridgeable level”.

The widespread poll boycott has now put a question mark over the next year’s general election. There is a fear that if the grassroots exercise like municipal and panchayat polls go un-participated, it is unlikely that the Lok Sabha elections will see any voting.

“This should be a moment of introspection for New Delhi,” said Naseer Ahmad, a columnist. “The boycott of elections in Kashmir is now more a result of the people’s own initiative than a response to the boycott call by the Hurriyat and militants”.

*Names have been changed to protect the identity.