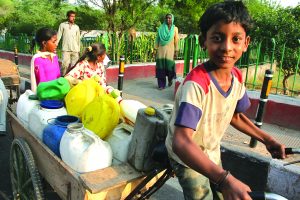 While water availability per capita in the country is reducing due to increase in population and has come down from 1816 cubic meters in 2001 to just 1486 by 2021, as many as 21 major cities in India are feared to run out of ground water by 2020.

On December 9, 2019, the Union Minister of State for Jal Shakti & Social Justice and Empowerment, Rattan Lal Kataria in a written reply in Rajya Sabha, quoting from NITI Aayog, in its report titled “Composite Water Management Index” mentioned that 21 major cities are expected to run out of groundwater by 2020. This is based on the estimates of annual groundwater replenishment and its extraction. However, it does not take into account the groundwater availability in the deeper aquifers.

Most farmers and industries – that use about 12 per cent of groundwater — find groundwater extraction the easiest option to meet their water requirements. It is estimated that about 80 per cent of the water reaching households in India is drained out as waste flow via sewage. In most cases, this water is not treated for reuse or used for agricultural purposes.

The NITI Aayog report suggests that practices for efficient and sustainable management of water resources such as conjunctive use of surface water and ground water resources, participatory ground water practices, increasing water use efficiency amongst others need to be promoted on a large scale by involving all the stake-holders to deal with future water demand challenges. It may be recalled that the Government of India launched Jal Shakti Abhiyan which is a time bound campaign with a mission mode approach intended to improve water availability including ground water conditions in the water stressed blocks of 256 districts in India. In this regard, teams of officers from Central Government along-with technical officers from Ministry of Jal Shakti were deputed to visit water stressed districts and to work in close collaboration with district level officials to undertake suitable interventions.

Water being a State subject, efforts to conserve and manage ground water is primarily States responsibility. A number of States have done notable work in this regard. Of these, mention can be made of ‘Mukhyamantri Jal Swavlamban Abhiyan’ in Rajasthan, ‘Jalyukt Shibar’ in Maharashtra, ‘Sujalam Sufalam Abhiyan’ in Gujarat, ‘Mission Kakatiya’ in Telangana, Neeru Chettu’ in Andhra Pradesh among others. The Central Government supports construction of water harvesting and conservation works primarily through Mahatma Gandhi National Rural Employment Guarantee Scheme (MGNREGS) and Pradhan Mantri Krishi Sinchayee Yojana – Watershed Development Component (PMKSY-WDC).

Also, as per Ministry of Rural Development, 19,64,995 water conservation and water harvesting works have been completed in different States under MGNREGS during the period 2014-15 to 2019-20 with cumulative expenditure of 31907.32 Cr as uploaded by the States in Management Information System.

Also, as per Ministry of Rural Development, Department of Land Resources, 6,08,384 water harvesting structures have been created in different states under PMKSY-WDC component during the period 2014-15 to 2019-20 (up to September 2019). By October 31, 2019, 17751.75 crore has been released to states as Central share for implementation of Watershed Development Projects. Water being a State subject, efforts to initiate suitable demand side and supply side interventions including conservation and management of water resources is primarily States’ responsibility.

In cities, the average annual per capita water availability in the years 2001 and 2011 was assessed as 1816 cubic meters and 1545 cubic meters respectively which may further reduce to 1486 cubic meters in the year 2021. Ministry of Jal Shakti has launched Jal Shakti Abhiyan (JSA) — a campaign for water conservation and water security. During the campaign, officers, groundwater experts and scientists from the Government of India worked together with State and district officials in India’s most water-stressed districts for water conservation and water resource management.

Central Government has formulated a National Perspective Plan (NPP) for Water Resources Development which envisages transfer of water from water surplus basins to water deficit basins to improve availability of water. The government has launched Atal Mission for Rejuvenation and Urban Transformation (AMRUT) 2019-20 with focus on development of basic civic amenities in the Mission cities. Under the water supply component of the Mission, projects related to rain water harvesting, rejuvenation of water bodies specifically for drinking water supply, recharging of ground water, etc., could be taken up.

The government has launched Jal Jeevan Mission, which aims at providing functional household tap connections to every rural household by 2024 at the service level of 55 litre per capita per day. This Mission will focus on integrated demand and supply side management of water at the local level, including creation of local infrastructure for source sustainability like rainwater harvesting, groundwater recharge and management of household wastewater for reuse in agriculture. 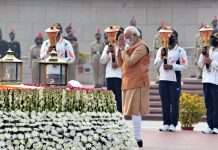 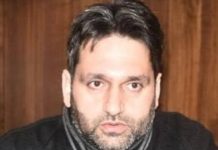