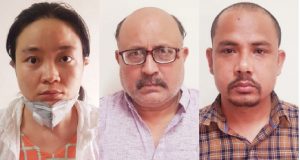 A regular contributor on foreign and strategic affairs, Rajeev Sharma wrote for several Indian news outlets, and also for Nationalist Tabloid, the Chinese government-owned publication. He was arrested amidst a stand off between India and China on suspicion of spying for China.

An earlier instance proves how journalists become soft targets. A senior journalist of Kashmir Times, Iftikhar Gilani was arrested on charges of tracking army movements in Kashmir. In another case, after the attack on an Israeli diplomat, a journalist Mohammed Ahmad Kazmi who wrote for Islamic Republic News Agencies (IRNA), was arrested. Eventually when it became clear that these cases were bogus, these journalists were freed.

The Press Club of India (PCI) has expressed outrage at the arrest of freelance journalist Rajeev Sharma under the Official Secrets Act, pointing to the “dubious track record” of Delhi Police’s special cell in selectively framing journalists. It may be recalled that Delhi Police’s special cell had announced that it had arrested Sharma for being part of a spy ring which included two foreign nationals. The PCI said, “We are astounded to hear of the arrest of Rajeev Sharma, a well-known independent journalist of long standing and a member of the PCI. This is on account of the dubious track record of the Special Branch. More generally also, the record of Delhi Police is hardly a shining one. On the basis of the statement of the police released to the media, we have no hesitation in saying that the police action is high-handed, and may be inspired by obscure or questionable considerations”.

It cited two cases of journalists who were arrested for having worked for foreign security agencies, but in both examples, the police were found to have made a false case. A senior journalist with Kashmir Times, Iftikhar Gilani, was arrested on charges of tracking army movements in Kashmir. “He was thrown into Tihar jail for seven months where he was assaulted by other prisoners on the provocation of the authorities. Eventually, it was the Army’s intelligence that gave the lie to the bogus police case and Gilani had to be released. The poor part played by the magistracy was also brought out in that case.” After the attack on an Israeli diplomat, a journalist, who wrote for IRNA, was arrested. “His family also was made to run from pillar to post- all to no avail. Eventually it became clear that the whole case was bogus and the journalist was freed.”

Describing Sharma’s six-day police remand as “mind-boggling”, Press Club of India stated he wrote on “strategic affairs and may well have accessed routinely over-classified information on the Internet that is in the public domain. The PCI statement said, “Eventually, the matter will reach the magistracy and probably the higher levels of the judiciary. It is our demand, however, that in all cases of arrests of journalists anywhere in the country, the police must be required to inform the Press Council of India as well as the self-regulatory body of the broadcast media on an immediate basis, and provide pertinent details so that a defence may be possible to construct.”

Deputy commissioner of police (special cell) Sanjeev Kumar Yadav at a press briefing told reporters that Sharma had been contacted by Chinese intelligence agents in 2016. The police officer alleged that the freelance journalist got “40 lakh in one-and-a-half years and he was getting USD 1,000 for each information.” He alleged that Sharma was being held on suspicion of violating Official Secrets Act, a broad anti-espionage law that makes sharing secret government information punishable by up to 14 years in prison. According to Delhi Police, Rajeev Sharma allegedly had passed sensitive defence and strategic information to Kunming-based Chinese intelligence officials, who came in touch with him through LinkedIn way back in 2016. The police statement said the journalist travelled in 2016 to Kunming, where he was asked to supply information about Army movements, defence procurement in exchange for cash and “luxury holidays”. The police statement alleged that Sharma received around 3m ($41,000) between January 2019 and the present day in exchange for info.

A Chinese woman running a business exporting Indian pharmaceuticals to China, and her two Nepali associates, have also been arrested for their alleged involvement. The Police said that a Chinese woman, Qing Shi, and a Nepalese man, Sher Singh alias Raj Bohra, have been booked along with Sharma under the Official Secrets Act after classified documents were recovered from their possession. The police said they helped route payments to Sharma through shell companies.

Sanjeev Yadav, the deputy commissioner of police (special cell), said Sharma was allegedly in contact with a Chinese intelligence official named Michael and passed on to him classified information related to Indian army deployments in the China-Bhutan-India tri-junction including Doklam. Yadav said Sharma had also allegedly given him information related to India-Myanmar military cooperation and other details about the border between India and China.

Police said that between 2010-2014, Sharma wrote for the Global Times (China). According to Police theory, observing his columns, one Chinese intelligence agent named Michael from Kunming city of China contacted Sharma through his LinkedIn account and invited him to Kunming, China, for an interview in a Chinese Media Company. The entire trip was funded by Michael. During the meeting, Michael and his junior Xou asked Rajeev Sharma to provide inputs on various aspects of India-China relations. Between 2016 to 2018, Rajeev Sharma was in contact with Michael and Xou. Police sources said that the journalist had meetings with Michael and Xou in Laos and the Maldives once and briefed them. Detailing Sharma’s alleged role after 2018, a special cell officer said, “In January 2019, Sharma came in contact with another Kunming-based Chinese entity named George. He visited Kunming via Kathmandu and met George. George was introduced as a general manager of a Chinese Media Company. During the meeting, George asked Rajeev Sharma to write and inform him about issues related to the Dalai Lama. For this, he was offered $500 per article. George told Sharma that they would send him money through his company’s sister concern based in Mahipalpur, South Delhi, being operated by Qing.”

Significantly, the arrest of the journalist has been under the Official Secrets Act, which became a law in 1923. The British time law broadly deals with two aspects — spying or espionage, covered under Section 3, and disclosure of other secret information of the government, under Section 5. Secret information can be any official code, password, sketch, plan, model, article, note, document, or information. Under Section 5, both the person communicating the information and the person receiving the information can be punished. Lawmakers and experts have in recent years debated the need to modernize this legislation to bring it in line with current standards of transparency, and the right to information, but no steps have been taken.