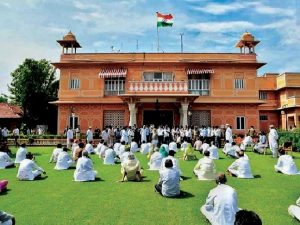 The bitter power tussle in the Rajasthan Congress has once again brought the age old issue of infighting in the grand old party and the role of the central leadership to the fore. Tensions in the Rajasthan government had been simmering for long between Chief Minister Ashok Gehlot and his former deputy Sachin Pilot, who was also the state unit chief till the recent flashpoint led to his ouster over alleged attempts to destabilize the state government.

While power struggles and factional fights have been a part and parcel of Congress politics over the past several decades, it may be wrong to assume that such confrontation and shadow boxing is limited only to Rajasthan.

The latest crisis is, rather, reminiscent of the challenges the Congress has been facing since 2014, when Prime Minister Narendra Modi came to power, and the role the high command has been playing in dealing with them.

Though Sachin’s detractors may paint him as a power hungry younger politician who just got impatient and ended up playing the game of rival Bharatiya Janata Party, the Rajasthan crisis has traces of the old guard vs the young debate that has troubled the Congress since the United Progressive Alliance days when the grand old party was trying to work out a smooth transition of power.

It was decided that Sonia Gandhi, who had taken over as Congress chief in 1998, would pave way for her son Rahul Gandhi, who entered the Lok Sabha in 2004.

Before the delayed first step towards this goal was taken when Rahul was made the Congress vice president in 2013 at the Jaipur AICC session, (Gehlot was the chief minister of Rajasthan then) a slew of young and promising leaders were identified as Team Rahul and were given roles in the UPA government to groom them for the future.

Sachin Pilot, son of former union minister Rajesh Pilot, was one of them and has worked closely with Rahul since then only to be dropped like a hot potato in the latest power-struggle in Rajasthan.

It was Rahul who had deployed Sachin as the new Rajasthan unit chief in 2014, months after the Congress was wiped out in the 2013 assembly polls under Gehlot as chief minister and could win just 21 of the 200 seats. Months after Sachin had taken over as Rajasthan Congress chief, the party lost all 25 Lok Sabha seats to BJP in 2014 but the result was on expected lines as no new state unit chief could have reversed the Congress’ fortunes in such a short span of time.

Rahul’s intent behind deploying Sachin in Jaipur was part of a plan to prepare a host of younger leaders to steer the party in states until he himself took over the reins of the Congress.

After Sachin moved to Jaipur, Rahul brought Gehlot to New Delhi as AICC general secretary in charge of Organization soon after the Gandhi scion became Congress chief in December 2017.

The arrangement worked fine till the 2018 assembly elections in Rajasthan in which Gehlot plunged to play a leading role. To his credit, Gehlot, who knows the state and party organization like the back of his hand, the former chief minister did play a crucial role in wresting power back from the BJP but party insiders acknowledged that Pilot too had worked hard for four years to ensure that kind of electoral turnaround and therefore, deserved to be rewarded suitably.

The Congress in 2018 was able to defeat the BJP by winning 99 /200 seats and though Pilot lobbied hard with Rahul for the chief minister’s post, the young leader had to settle down for the post of deputy chief minister as the party veterans convinced Rahul to go with Gehlot who was, in their estimates, better positioned to counter an aggressive BJP under PM Modi.

Around the same time, a similar power struggle between the old guard and a younger leader was witnessed in Madhya Pradesh, where the Congress could defeat the BJP after 14 years and decided to name veteran Kamal Nath as chief minister instead of former party leader Jyotiraditya Scindia, whom Rahul personally favoured. The old guard had won this round too.

Scindia, who was sidelined by Nath and did not even get a proper hearing in New Delhi, felt frustrated and alienated in the state unit before he decided to quit the Congress in March this year and join the BJP. His exit led to the Kamal Nath government losing power in the central Indian state as the high command kept watching and deployed a battery of spokespersons to dub the BJP’s manoeuvres as anti-democratic. Scindia is today a Rajya Sabha member from the BJP and has several of his loyalist MLAs functioning as ministers in the Shivraj Singh Chouhan government in Madhya Pradesh.

Going by the BJP’s insatiable hunger for political power by hook or crook political watchers and party strategists had feared a repeat of Madhya Pradesh in Rajasthan as well as they heard stories about the Gehlot-Pilot rift widening.

The sad part is nobody in New Delhi including Sonia Gandhi, the interim party president, or Rahul, who may soon return as party chief, cared for the situation getting out of hand in Rajasthan till the latest crisis precipitated with the Pilot camp claiming the Gehlot government had lost majority.

Though a rebellious Pilot kept sending feelers that he was still in the Congress and that he was not joining the BJP but only wanted certain issues settled, the state unit expelled him from the government and the party and dubbed him a useless person indicating the Congress had made up its mind to shut the doors on the young leader.  Interestingly, the message getting across was that the high command was backing all the decisions being taken by the Gehlot camp which wanted to go for the kill.

As in MP, the Congress leaders tried to cover up the Rajasthan crisis as yet another attempt by the BJP to subvert democracy by engineering a defection in the Gehlot government. But they were not prepared to acknowledge that it was more a reflection of party infighting than an opportunist BJP instigating Pilot.

The BJP’s role as the Pilot camp remained confined in a Manesar resort in BJP-ruled Haryana was ostensible though the saffron party officially maintained distance from the Gehlot-Pilot power tussle unfolding in Jaipur.

Pilot, who has been served a notice why he should not be disqualified for defying a party whip, has taken the battle to the court and irrespective of what the ruling is, the Congress has lost one of its best and brightest young leaders.

A review of what pushed Pilot to rebel would certainly help the party understand the symptoms of a malaise which has affected the organization for long and is prevalent across state units. There were reports that Pilot did not get an audience with Rahul though Priyanka Gandhi Vadra spoke to pacify him.

Party insiders defended the tough action against Pilot saying the trend of ambitious leaders leaving the Congress is not new and that the exit of either a Scindia or a Pilot would not make much difference, the optics certainly have been bad for the grand old party and for Rahul, who may be back at the helm again soon.

Besides Madhya Pradesh and Rajasthan, infighting had earlier cost the party dear in Haryana and Delhi though the party was able to share power in Maharashtra by deciding to join the Shiv Sena-NCP-Congress coalition last year.

The Congress is out of contention in big states like Uttar Pradesh, where Priyanka is trying hard to stage a comeback and in Bihar, where the Congress plays second fiddle to all RJD. Together, UP and Bihar send 120 members to the Lok Sabha and should therefore demand the full attention of the high command.

The Rajasthan drama is not over. Whether the party is able to retain power in the state remains to be seen once the court verdict on the status of rebel Congress MLAs is out.

However, such episodes beg the question why the central leadership remained passive when their timely intervention could have saved the day for the Congress at a time when the party is struggling to regain lost ground across the country and hopes to defeat the duo of PM Modi and home minister Amit Shah in the 2024 national elections.

That seems like a tall order for the Congress, which could improve its Lok Sabha tally only marginally from 44 in 2014 to 52 in 2019 national elections out of the total 543 against the BJP, which went up from 282 to 303 during the same period.

Rahul is not entirely off the cuff as he has been single-handedly taking on PM Modi whether it is the issue of sliding economy or Chinese seizing Indian land along the Line of Actual Control in eastern Ladakh or even managing Covid-19 pandemic, but he needs to act swiftly to cover up any chinks in the Congress’ armour which may weaken the grand old party and give the BJP an opportunity to strike.

After six years of the Modi government and a sliding economy, people feel the need for a strong national opposition and think the Congress can play that role. However, the onus is on the grand old party to present itself in a new avatar before the voters, identify itself with issues affecting the lives of people and present an alternative vision for the country’s future.