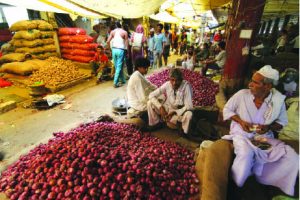 In such a scenario, the RBI is left with no option but to raise interest rates to contain inflation. The RBI measure aims to protect the poor from price rise for the present and for future. While it happens, the industry suffers because it cannot expect a rate cut from the RBI. When the manufacturing sector and services sectors are hit, the growth rate is automatically hit.

The rising crude oil prices that Tehelka had highlighted in its cover story Fuel on Fire in June have started pushing inflation to a new high. The Index of Industrial Production for June reveals how macroeconomic activity has been affected by contributing significantly to a 214 basis points in June 2018. Thanks to all these contributing factors, the inflation has risen from 4.55 points in February 2018 to 16.18 per cent by June. Then food, fruits and vegetables are another cause of worry. The inflation in vegetable prices more than tripled in pace from 2.51 per cent in May to 8.12 per cent in June. The manufacturing sector is also a cause of worry for the upward trend in inflation. The inflation in the manufacturing sector including basic metals that includes a range of goods from alloy steel castings, stainless steel tubes to copper plates and aluminium sheets showed inflation of 17.34 per cent.

In its latest report, the International Monetary Fund (IMF) has brought down its growth forecast for India by 10 basis points to 7.3 per cent for 2018-19. Significantly, it has downgraded the growth rate by 30 basis points to 7.5 per cent for 2019-20. The main reason for the downward revision is raising fuel prices. What could add to inflation is that the government has already announced higher minimum support prices (MSPs) for Kharif crops, which will have an inflationary impact.

As general election 2019 is less than a year from hence, it is expected that the government will announce several popular schemes ahead of it to woo voters. This is sure to further increase the fiscal deficit and eventually affect economic growth and lead to further inflation. The monsoon is already deficient and it could add to the miseries of the economy.

The Asian Development Bank (ADB) has also raised its inflation the projection for India to 5 per cent from 4.6 per cent for 2018-19.

Again the reasons are higher crude oil prices, depreciation of the rupee and increase in minimum support prices. The Asian Development Outlook (ADO) released in April observed that the upward revision “responds to higher oil prices, significant depreciation of the Indian rupee in the past few months, and generous increases announced on July 4 in minimum support prices for summer crops, by which the government intervenes in markets to protect agricultural producers from any sharp fall in farm prices.” The International Monetary Fund had also lowered its growth projection for India by 10 basis points to 7.3 per cent because of higher oil prices and speedier interest rate increases by the Reserve Bank of India (RBI) due to higher than expected inflation.

The ADB report said that the “Other key drivers of growth include an uptick in public consumption, which is typical before elections, and a recovery in exports following shortages of working capital related to a new goods and services tax.

Private consumption is expected to grow at a healthy rate as disruption caused by demonetisation in 2016 fades. Capacity utilisation rates are at its highest in four years and should provide incentives to firms to invest.”

However, many analysts do not rule out the RBI going for another round of rate hike in near future.  The RBI had on June 6, 2018, raised the repo rate by 25 basis points to 6.25 per cent. It was the first rate hike in more than four years due to higher risks from rising inflation.

This is what is actually happening and it confirms the theory that Wholesale Price Index rise would mean wholesale worries for the economy.