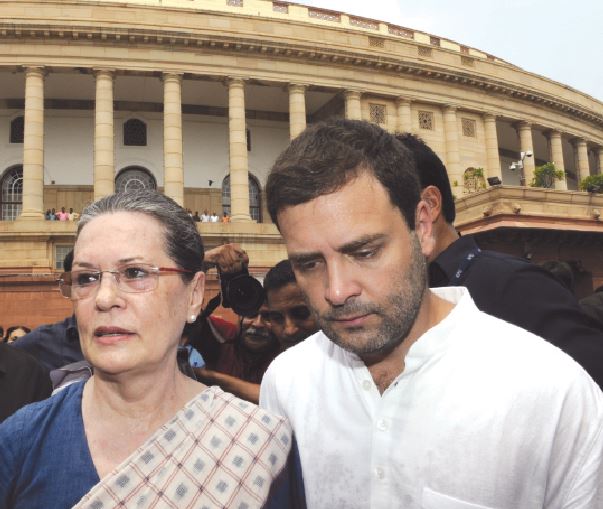 Ahead of the Parliament’s Monsoon Session, starting July 19, Congress circles were abuzz over reports that party chief Sonia Gandhi could replace Adhir Ranjan Chowdhury as leader in the Lok Sabha.

If not Sonia, the reports further mentioned, former party chief Rahul Gandhi may become the leader in the lower house of Parliament even as names of two other senior lawmakers, Shashi Tharoor and Manish Tewari also came up.

Though party leaders denied the widespread speculation over Chowdhury, the broad hint was that the Congress was up to some key changes in the organization after its poor performance in the recent polls in West Bengal, Assam and Kerala.

Sonia has been functioning as Chairperson of the Congress Parliamentary Party since 2014 and can effectively lead the lawmakers in the Lok Sabha even though she has not been keeping good health for a while.

This limits her chance to lead the party in the lower house as it brings a lot of demands on the person holding the key post.Rahul, too, could have headed the party in the Lok Sabha in 2019 but did not. There is a view in the party that Rahul may

accept the post once he becomes Congress chief again but there is no clarity yet on when the internal elections would be held.

According to party leaders that exercise may not take place till the time the pandemic has been brought under control. So, for now, it is unlikely that he will agree for the Lok Sabha leader’s job, which again would demand his longer presence in the House.

Further, if a change has to happen, senior lawmakers Shashi Tharoor or Manish Tewari, could also be given the responsibility, some party leaders said while agreeing that Tewari may be sent to Punjab to replace state unit head Sunil Jakhar.

All-India Congress Committee spokesperson Pawan Khera ducked media queries related to the Lok Sabha leader but said that change was an ongoing process in the organization.

Not only about the person, there was widespread speculation over the possible reasons why the Congress could change its Lok Sabha leader, who was also the head of the West Bengal unit.

That the Congress was wiped out under Chowdhury’s watch in the recent assembly elections was the most obvious one.

But going beyond that, there were also hints that the Congress might be looking at mending ways with the Trinamool Congress, which has emerged powerful after defeating the BJP in the eastern state.

Chowdhury, who used to slam West Bengal Chief Minister Mamata Banerjee as being hand in glove with the BJP, never had a comfortable equation with the TMC founder.

It was alleged that he never entertained former five-term MP Mamata whenever she visited Parliament, while Chowdhury maintained that he never got an appointment with the TMC founder.

The strong views that Chowdhury had against Mamata prevented a coming together of the Congress and the Trinamool Congress in the recent West Bengal assembly elections though the grand old party aligning with the Left parties could have been a major roadblock towards that goal.

During the assembly polls, Chowdhury regularly attacked Mamata and her party while the central Congress leadership refrained from doing so. Even Rahul Gandhi planned to campaign in the state very late to avoid dividing the anti-BJP votes.

Chowdhury had also dubbed Mamata’s foot injury as a gimmick while the Congress had condemned the attack on her.It was also alleged Chowdhury never hosted opposition get-togethers with other opposition leaders in Parliament.

The removal of Adhir, his critics argue, may pave the way for the Congress and the Trinamool Congress to work in close coordination during the coming session of Parliament and later outside of it.Already, Mamata who has had a lot of run-ins with West Bengal Governor Jagdeep Dhankhar over the past years, is planning to deploy the TMC lawmakers to protest against the Constitutional officer in Parliament in a big way.

The TMC is also trying to mobilize the other opposition parties in petitioning President Ram Nath Kovind to recall the West Bengal Governor over his alleged partisan conduct.

The Congress too is preparing to corner the Centre over various issues like economy, alleged corruption in Rafale jet deal, the seven-month-old farmers agitation and mismanagement of the pandemic.

Amidst rumors over his likely removal, Chowdhury maintained his aggressive streak against Mamata saying she was not the only opposition leader to have defeated the BJP and cited the names of Delhi chief minister Arvind Kejriwal, Kerala chief minister Pinarayi Vijayan and Tamil Nadu chief minister MK Stalin.

He expressed the hope that the Congress would revive in his home state and said that a national opposition formation would not be possible without the Congress which was the only party with a pan-India presence.

Though Mamata has been trying to lead an opposition front and has been supported by NCP chief Sharad Pawar and Shiv Sena’s Sanjay Raut, the two leaders also noted that any such grouping was not possible without the Congress.

In that light, the move to replace Chowdhury might also be a hint that the Congress and the Trinamool Congress are preparing ground for a larger national alliance that has been talked about for some time to take on the BJP in the 2024 Lok Sabha elections.

Chowdhury was named as the Congress leader in the Lok Sabha after the 2019 national elections in which the grand old party could increase its tally only marginally from 44 in 2014 to 52.

The Bahrampur lawmaker was also made the chairperson of the powerful Public Accounts Committee of the Parliament as the position is usually offered to the single largest opposition party in the lower house of parliament.

As head of the key parliamentary panel, Adhir had verbal duels with the BJP lawmakers over examining the impact of Covid-19 on various sectors and on the progress in the vaccination program.

Known as a Gandhi family loyalist, Chowdhury was one of most vocal leaders who slammed the group of senior leaders or G23 for raising a rebellion against the Congress high command demanding a full-time visible party president and elections for all party posts down to the district level.

However, after the party’s recent poll debacle in West Bengal, Adhir was candid in acknowledging that the Congress needed to come out of social media and hit the streets to be counted in the eastern state.

The Congress had partnered with the Left parties, who had later roped in the Indian Secular Front backed by Islamic cleric Abbas Siddiqui. Though both Congress and the Left parties failed to open their account, ISF bagged one seat.

While changes at the national level are awaited, the Congress recently revamped the state units in Kerala and Telangana and plans are afoot to restructure the Pradesh Congress Committees in poll-bound Punjab and neighboring Haryana.

The party recently appointed K Sudhakaran, a member of Parliament from Kannur in north Kerala, to head the Kerala unit. He started his political career from the Janata Party in the 1970s and later joined the Congress at the behest of veteran K Karunakaran. He became a lawmaker from 1996 to 2009 and was a minister under chief minister AK Antony.

The move came after the Congress lost the assembly elections recently under former state unit chief Mullapally Ramachandran, who later resigned. The party also appointed senior leader VD Satheesan as the new Leader of the Opposition in the Kerala assembly in place of veteran Ramesh Chennithala.

In Telangana, the party appointed Lok Sabha member A Revanth Reddy as the new head of the state unit while former parliamentarian Madhu Goud Yashki was made head of the campaign committee.

Some new AICC secretaries and district unit presidents in poll-bound Uttar Pradesh have also been named by the Congress over the past weeks.