CHORUS IS GROWING to arrest Bishop, Franco Mulakkal, with nuns taking to streets questioning who is shielding the alleged rapist. An FIR had been registered against the Catholic Bishop of Jalandhar long back on June 28 after a nun belonging to the order of Missionaries of Jesus alleged that the Bishop raped her 13 times since 2014. In a recent letter to the Vatican’s India representative, the nun said that the bishop was using all the money and power at his disposal to derail the case and buy his way out of the charges. Sadly, even after almost 80 days, the accused has not been arrested and now only summoned to appear before police in Kerala on September 19.

The victim has alleged that she sought help of Delhi Archbishop Anil Couto and George Alencherry, head of the Kochi-based Syro-Malabar Church, but the clergy did nothing. In fact Bishop Mulakkal has been shaming the victim time and again on national television channels and newspapers claiming that the rape complaint against him is a sign of revenge for taking action against the victim. He has been making allegations against the victim and maligning her reputation. A motor mouth MLA from Poonjar, P.C.Geroge has also made deplorable comments about the nun calling her “prostitute” who “enjoyed 12 times and on the 13th time charged it is rape”. The law maker had the audacity to say that “if it was rape why she failed to lodge a complaint the first time?” The Missionaries of Jesus Congregation instead of supporting the nun, supported the bishop and alleged that the nun had “questionable relations with a local taxi driver and with a relative’s husband’’. They also alleged she attended an event with Bishop Mulakkal the day after the alleged rape.

It is not a complaint by one nun but four more nuns have come out in her support and joined protests in Kerala to press for action. While nun 1 alleged that she was raped by the Bishop 13 times, nun 2 alleged that the Bishop touched her inappropriately, nun 3 has alleged that Bishop took advantage of his exalted position, nun 4 alleged that Bishop hugged her forcefully while nun 5 wrote to Cardinal against Bishop. Today, Church is facing crisis of credibility! It is clear case where her own institution is shaming her. Well if Bishop claims that he is innocent, why doesn’t he face probe? Is Bishop bigger than law of the land? Forget the police, even the Church has refused to take action, thereby, rendering its credibility to doubt. It should come clean or else followers would stop believing in religious institutions. It is a moment of Truth for the Catholic Church! 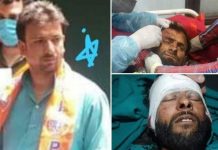