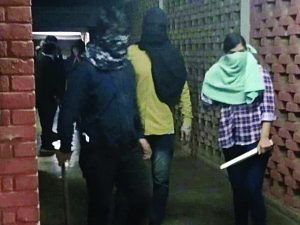 Double standards are stark and blatant. The Uttar Pradesh government is said to be all set to ban the PFI/Popular Front of India, after arresting several of its key members, but does not even contemplate to ban any of the right-wing communal brigades known to be more than participating in violent rioting and extractions and targeted assaults. Hindutva outfits have been even holding arms training camps for its members, where they are rather too openly trained to shoot the ‘other’ — dummies of men wearing skull caps!

Hindutva outfits are now attacking students in university campuses. In fact, the brutal violence on Sunday evening inside the campus of the Jawaharlal Nehru University, more than relayed that the Right Wing was more than involved. It got clear after goons who’d entered the campus without any hindrance started shouting and raising slogans — Desh me gaddaron ko goli maro — whilst destroying the university property and attacking students and the teachers with iron rods, cricket bats and lathis …Where were the security guards at the gates of this university who otherwise are there in full attendance with a huge register together with the typical round of questioning — whom to meet and why and the connected queries.

Quite obviously the university’s security guards were threatened or ordered to get going, to be away from the scene! Also, why wasn’t the police not taking on the attacking goons? Was this because right-wing men were leading the pack of attackers? Was it because they were instructed not to stop those Hindutva goons from attacking students and ransacking the university premises?

In fact, when Swaraj Abhiyan president Yogendra Yadav reached the university gates, he rather too openly mentioned the name of one particular BJP politician who was leading the attackers right inside the campus. Soon after Yadav mentioned that BJP politician’s name, Yadav was roughed up and manhandled by the ABVP students standing there in full strength. Quite obviously, those rightwing affiliated students did not want the mastermind’s name to be revealed on national television!

Not that it would make any difference, because political rulers of the day are calling the shots; they can get anyone beaten or killed or paraded naked or even sexually abused by the official machinery under their direct control. Perhaps, orders are dictated by the key political rulers, whom to target and whom to shield.

With this fascist scenario spreading out in the capital city and also in the other parts of the country, it’s going to be rather effortless for the Right-Wing goons to target us, the secular us, the non – Sanghis! Nah, not a soul to protect us as the policing force is either stuffed with their chosen lot or with those who are under pressure to follow fascist dictates. When the police force wants it can enter any University campus, fire at even the peaceful students protestors or arrest even the bystanders.

Double standards are all the way. After all, all those speeches of the right-wing rulers that they want to reach out to the young India are turning out to be downright bogus. A complete sham! Instead of our students studying they are either getting severely beaten by Hindutva goons together with the police force, or else they are standing out there participating in those silent protest meets or else they are trying to deal with the shockers in the shape and form of FIRs slapped on them!

Why is this government out to ruin the lives of our students? They have done so in the Kashmir Valley, with large numbers of the Kashmiri blinded by the pellets fired on them by the security forces or else made to sit all too imprisoned in that open prison!

State-unleashed savagery is on to such an extent that in Uttar Pradesh even the madrasa students are not spared. In last month’s violence in Western Uttar Pradesh, children housed in one particular madrasa were assaulted and abused by the police force …well, abused to such an extent that news reports state that at least two madrasa students were left with rectum bleeding! Who is there to protect these poor madrasa children, many of them orphans and from very modest backgrounds! Who will see to it that their tormentors are caught and paraded on the roads! Who will tell those children that they will have to live with those dents and scars, as these are fascists times where the rulers are out to ruin each one of us!

Ironies do not stop here. Uttar Pradesh government’s belated assurances of setting up an enquiry committee or SIT to look into the violence that erupted where hundreds of innocents targeted, carries little assurance! Videos and more videos have surfaced, each carrying evidence of the cops’ brutalities and frightful communal biases, yet not one cop booked or sacked under terror charges! 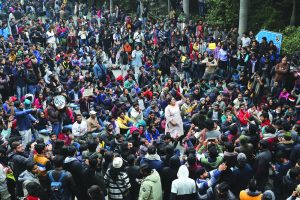 We are destined to be living in these dark times where the powerful can get anyone killed and bumped off. And we aren’t even supposed to react, because we could be next in line. Any possible alibi to be killed by those yielding brute force. In fact, the in- vogue alibi is to label the targeted a terrorist! Never mind, if the killer is himself terror striking, indulging in mass killings!

In fact, this brings me to ask – why little reaction to the blatant US airstrike that killed Iranian general Qassem Soleimani …A targeted, well planned killing! Murder of the top ranking Iranian general! Yet we weren’t supposed to react or mourn or cry out, because it was carried out by the super power of the world!

Who is a terrorist today in today’s world? Who is terrorising hundreds? To quote Noam Chomsky — “in the Reagan years alone the US-sponsored state terrorists in Central America left hundreds of thousands of tortured and mutilated corpses, millions orphaned and four countries in ruins. In the same year, Western-backed South African depredations killed 1.5 million people. I need not speak of West Asia or much else …All of this, however is barred from the annals of terrorism by a simple devise,the term ‘terrorism’ like most terms of political discourse has two meanings -a literal one and a propagandistic one. Needless to add that the propagandistic version is preferred and pursued by the US… terrorism is terrorism that is directed against the US and its friends and allies.” Noam Chomsky also draws parallels between US and the Nazis, “The Nazis, for example, bitterly condemned terrorism and conducted what they called counter terrorism against terrorist partisans.The US basically agreed and it organized and conducted similar counter terrorism in the post war years.”

In fact, each time I see television shots of the Middle East, of hundreds killed in car explosions, bombs strapped on the alive forms of teenagers, dying children and adults, homes and buildings bombarded, entire settlements razed to the ground in the garb of ‘looking for terrorists’, I have been asking myself –Who is behind these mass scale destructions with minutest precision, from one marked target to the next, from one end of the world to the next? Who is behind these deadly tactics at unsettling the existence, the very basic survival of millions in landlocked States? Who is killing whom! Who is that big terrorist out to destroy us all! 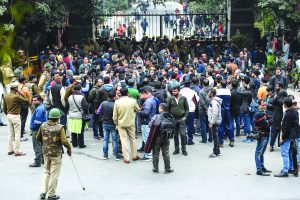 Over the last three decades I have heard the successive Palestinian envoys detail America backed Israeli intrusions into their territory. I recall Palestinian envoy to India, Dr Khaled Al — Sheikh speak at the various forums and platforms of the atrocities his countrymen were subjected to. And when Osama Musa was posted in India as the Palestinian envoy he spoke along a broader perspective as he was Commander of his country’s Air Force when the Oslo Agreement was signed in 1994, and thereafter he was appointed the Chairman of the Regional Security Committee which was meant to oversee the implementation of the Agreement on the Palestinian side. And during the course of a series of interviews with me, Osama Musa had stated that Israeli tanks are getting inside Palestinian homes.

“The situation in Palestine is so bad that it is Israel which decides everything, including the mass killings of our children… And I can tell you that without America’s support Israel is zero. Israel cannot survive a single day if America didn’t support it…Fact is, there is no justice or civilization left in today’s changed world order.I have been reduced to the status of a refugee in my own land and there is nothing at all that I can do about it as America -backed Israel controls our lives!”

And in 2001, when during the course of an interview, I had asked Libya’s erstwhile ruler Colonel Muammar Gaddafi’s son, Saif — EL Islam, to comment on the ‘terror tags’ heaped by the Western Power on his father, and the role played by that Super Power, he had this to say — “The US being a super power,it considers it to be its right to impose embargoes or bomb and attack another country…”

In fact, Khan Abdul Ghaffar Khan’s grandson, Asfandyar Wali Khan, had come up with this rather apt explanation to the growing turmoil in today’s world, more so in the Islamic world,“ If you have two badmashes in a village it’s okay, because the two will be busy settling scores with each other. But there will be chaos and confusion if there is only one badmash left! That’s the trouble in today’s world. There is only one badmash left! …Religion was used by Americans in Afghanistan to create their base, otherwise Afghan struggles had been based on nationalism and not religion…Its a known fact that way back in early 90s, madrasas and other religious institutionshad been set up by the CIA, under the so many camouflages, along the Afghan-Pakistan border.

And if we were to focus on Latin American countries, its best to hear what the well-known Mexican writer and columnist Juan Miguel De Mora had to tell me during the course of an interview whilst he was visiting New Delhi several years back.When I had queried about the USA he began by quoting two former Mexican presidents — “Mexican president General Porfirio Diaz had said way back (he was president till 1910) ‘Poor Mexico so far from God and so close to the US.’ Then another Mexican President -Adolfo Lopez Mateos had said that the biggest problem faced by Mexico is ‘the US.’ Together with that Mora came up with his own comments — “But in my opinion both Mexican presidents were too diplomatic. President’s Bush‘s democracy is like Stalin’s and I have been writing in my columns that Bush’s policies are a danger to humanity.”