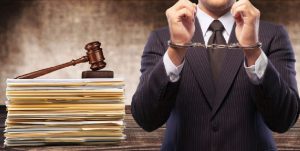 As an antonym, White, the much touted colour of peace, purity, nobility, transparent, “satvic” in character, symbolizing goodness, sympathy and all that was humane in the humanity. Based on such high ideals, White came to be associated with medical profession (hence white dress of all those who are in health care).

This plain and simple dichotomy in human thought, over the time, took an ingenious turn when all those ill famed epithets alluded to Black colour were metamorphosed under the garb of White colour. The age old criminally slanted acts, inter alia, of deception, forgery, extortion, counterfeiting, homicide, secret manipulations et al, were now committed in broad daylight and openly by resorting to a myriad of sophisticated ways and means.

The societal narrative took a sharp u-turn and changed its nomenclature from black deeds of criminality to sophisticated white collar crimes. So far so, it was remained within the realm of tolerance since white collar could be a part of anyone’s dress, no matter whether the person involved was a politician, a bureaucrat, a journalist, a business tycoon, a banker, a legal eagle, a broker etc. etc. A matter of deep concern though it was, yet the society at large was tolerant enough to swallow it even when if was hard to do so.

The timeless ancient wisdom comprising numerous Sanskrit texts opine that the maximum suffering anyone undergoes, emanates at three places, the “shamshaan”, the “court” and the “hospital”. Going to “shamshaan”, though is a very disquieting experience, yet being unavoidable, hence there can be no escape. Insofar as a visit, if at all, to two other traumatic places is concerned, hardly five to ten percent of living beings get  any reason to go to “courts” and grapple with the black coat syndrome. Good luck can still save one’s life sans finances.

The bulk ninety percent have, however, have to scuffle with white collars in the form of brokers, bureaucrats, politicians, bankers, auditors, journalists et al., who generally, barring exceptions, keep their baits ready for enticements by exhibiting their tassels of impressive descriptions, like academic or social achievements (no matter, gained by toil or by finances or by sycophancy). Most of such white collars revel in a pernicious practice of prefixing plumes of their “profession” before their names, thus propping up their own utterly weak persona with purportedly acquired skills. May God be with those, who are get ensnared into such nets.

After many decades of pursuing hackneyed and self destructive executive and economic policies by aforesaid white collars, when the present dispensation came up with maverick and innovatively stunning policies, a large number of “white” (mark it, not black) sheep, among the white collars with their gorgeous tassels operating as bankers and financial advisors, critically sabotaged the system from within just lured by lucre. As if mauling the demonetization exercise was not enough, the ill famed scams of doling out fabulous amounts of loans to undeserving and now fugitive brats, scams in GST, Bank Gift Coupons, etc. etc. make daily headlines in print and electronic media.

Now the narration shifts from white collar craftiness to white coat chicanery. Ultra modern snobs, who under an illusory superiority of their knowledge and intellect solely based on their elitist educational background, shun any other traditional healing system, on the ill founded presumption that it has not been proved “clinically”, a fascinating term coined by pedagogues of pharmaceutical corporations. Finally, one is left with only one system, popularly owing its origin to much touted Hippocrates. Many very honest, humane and dedicated practitioners even in this system are there and by their art of healing have made a name. As exceptions don’t prove the rule, so does the graphical narration of misdeeds of a large majority. Such “white” sheep are the real “pathogens” of the healthcare system.

To elaborate the purport of this write up, instead of reproducing the entire Hippocratic Oath, only the salient features are quoted verbatim. “…… I will follow that system of regimen which, according to my ability and judgment, I consider for the benefit of my patients, and abstain from whatever is deleterious and mischievous…. Into whatever houses I enter, I will go into them for the benefit of the sick, and will abstain from every voluntary act of mischief and corruption; and, further, from the seduction of females or males, of freemen and slaves. Whatever, in connection with my professional practice or not, in connection with it, I see or hear, in the life of men, which ought not to be spoken of abroad, I will not divulge, as reckoning that all such should be kept secret. While I continue to keep this Oath un-violated, may it be granted to me to enjoy life and the practice of the art, respected by all men, in all times! But should I trespass and violate this Oath, may the reverse be my lot!”

After referring to the salient parts of the famed Hippocratic Oath, following are some the pertinent quotes of this Great Physician:

◆ The greatest medicine of all is teaching people how not to need it.

◆ The physician treats, but nature heals.

◆ The patient must combat the disease along with the physician.

◆ Leave your drugs in the chemist’s pot if you can heal the patient with food.

◆ Let food be thy medicine and medicine be thy food.

◆ All disease begins in the gut.

◆ Natural forces within us are the true healers of disease.

◆ The soul is the same in all living creatures, although the body of each is different.

Before you heal someone, ask him if he’s willing to give up the things that make him sick.

This write up does not mean to applaud or denigrate any particular system of healing. Whatever appeals to any individual, is it’s ones choice. Before proceeding further, let’s delve into what Hippocrates, the father of modern medicine has to say about the art of healing. Ironically or may be customarily all white coat wearers are presumed to have sworn by Hippocrates. If that’s really true and not simply metaphorical, then observing the slyness with which a large number of white coats, barring blessed exceptions, denude any sick person of his net worth, is appalling. The celebrated Greek Physician (c.460 B.C.- c.370 B.C.) must be turning in his grave by the wiliness of modern medicine practitioners for tarnishing his fame.

Needless to say that the healing art which is taught in all streams of various pathies, has two distinct approaches, one is preventive and the other is curative part. From the verbatim quotes of Hippocrates, it’s discernible that the great Physician is mainly leaning on the preventive part of the healing art. Can anyone produce even a shred of evidence to show that except for few blessed modern medicine healers, any of the common to high and very high end practitioners, earning, nay minting heaps of money, are in any manner practising preventive medicine. Though it’s common knowledge, yet while putting in this write up, it’s not only stunningly outrageous, but is deprecated in the strongest terms.