A unique experiment in the form of a WhatsApp group was perhaps the first in the country as Covid-19 began spreading fast. Not only people at large but the administration began getting the latest updates through this group. Interestingly the WhatsApp Group began connecting with people even before the lockdown was enforced in the country. This helped not only in curtailing the spread of virus but also helped administration to reach out to people with relief measures and for making provision of masks and ration.

The initiative began when a well known social activist, Sarika Katoch, spearheaded this movement. It was on March 21 when she met administrative officers and took responsibility for this onerous task. All Panchayat heads, Mahila Mandals, Youth Mandals, Self Help Groups, Youth Club members and NGO joined this group. Top officials including the Deputy Commissioner, Superintendent of Police, SDM and health officials joined this group named “Kangra against Covid-19”.

Just three days after formation of this group, a lockdown was announced in the country by the Prime Minister, Narendra Modi. Immediately this group became a vital link between needy people at the ground level and they started getting what they needed most. It was most required in Kangra because this was the district which reported the maximum number of coronavirus cases initially and even the first death from Covid-19 in Himachal Pradesh was reported from Kangra district.

Sarika Katoch, who has in the past represented India during the fight against AIDS at the international level, said, “this initiative in the form of WhatsApp group became a bridge between the people and administration immediately as lockdown began”. Talking to Tehelka, Sarika said, “We not only got full support from the Deputy Commissioner and Superintendent of Police but from other officers, Panchayats, women groups and youth groups. Since information received from them is credible, it was implemented without waste of time. At that time there was dire need for hand sanitizers and masks. Mahila Mandals began making masks and these reached every nook and corner immediately”.

Not only that, migrant labourer got food and ration. A chain was formed by the action group to ensure that needy get what they require. Sarika says that the information gathered at the ground level helped in reaching out to migrant labourers and other needy persons to send relief material. She says that food items are being distributed to needy through concerned sub divisional magistrates. Volunteers and other good spirited people have been able to send quintals of food stuff to needy people through this action group.

Interestingly people in far flung areas of hill state can be seen wearing masks. These people are now well informed as the group has enlightened them about the Covid-19 pandemic. One such area is Bhangal where people don’t even have access to television and newspapers. There are certain belts where it takes weeks to reach. The results have been positive and encouraging-reason entire information became available on a single platform and people followed the Covid-19 protocols and instruction in letter and spirit.

The WhatsApp group also helped livestock. Animals got fodder even in backward areas like Changar. A Panchayat head in Jamanabad area admitted that domestic animals are lifeline for farmers as they provide milk and work in farms. Provision of fodder at such junctures by volunteers was a great help.

In addition, the group members played an important role in getting a school vacated and converting it into a quarantine ward. People who returned to the home state from outside were looked after by the group, provided food from their homes and sent to their native places after being quarantined for 14 days as per the prescribed procedure.

Chief Medical Officer of Kangra Gurdarshan Gupta told that through this group, members were told to explain to people that coronavirus is a pandemic and affected persons should not be discriminated against but looked after well. Talking to Tehelka, Gupta said that “everyone should understand that Covid-19 is a contagion like any other infectious disease. Any body can contract it and it is for us to not to discriminate against those suffering from it or their families. It is a disease and not a social stigma.”

Importantly, the group while implementing the directions of administration also worked for economic revival. Sarika said that people were advised to grow vegetables at homes. When it began from kitchen gardening it reached farms and proved to be vital for maintaining supply chain.

The group is also organizing webinars to discuss issues with well known personalities live. The rate lists of different goods issued by the administration is also shared with the people for their benefit so that there is no overcharging.

Sarika says that this group has been able to check rumours. Giving an example, she says that when rumours about Tablighi Jamaat started spreading, the group cautioned people to not to
believe in rumours. “We made sure that anti-social elements are not able to divide people by fake news. We also kept in regular touch with administration and contained the situation,” she said.

The group not only arranged to quarantine around 2,900 Kashmiri Muslim labourers working in Kangra district, but also helped them in their preliminary tests so that no one was infected. These workers come here in large numbers to work. 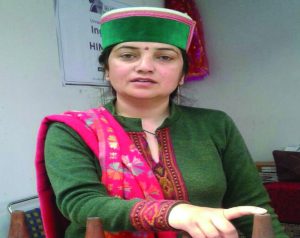 Sarika was nominated as an “election observer” for the presidential election in the South African country of Ghana in year 2008. In addition, the BBC World Service Trust awarded her the “Youth Star” award of the country for her pioneering work. She also represented India as a youth representative at an event in China in 2006.

Sarika is also the chairperson of Himachal Pradesh Children’s Development Organization. She has been honored with several awards at the state and national levels, including Best Youth Award, Best Cadet Award, Best Cultural Worker. A post-graduate in rural development, she has been able to make her mark internationally by moving out of a small village in Kangra.

She was one of the distinguished guests specially invited to the Commonwealth Headquarters at Marlborough House, London on March 9, 2009, and had met Queen Elizabeth II, (Head of the Commonwealth).

Her husband Arvind Panwar is also a social worker. Sarika’s father was also involved in social work from a young age, while her mother was a homemaker. Sarika says that there are some very remote areas in Himachal and Kangra has inaccessible areas like Bhangal, where it is very difficult to reach.

During a conversation, Sarika said – “When we started this group, there was no lock down. As the cases of Covid-19 started coming up in Kangra district, we got worried about the people and decided to form this group which brought very positive results. We were successful in getting the face masks made by our Mahila Mandals for the people at a time when their availability at the government level was negligible. This helped prevent the spread of virus and when lock down took place, we formed a chain to make a work as a bridge between the administration and people to reach out to them with relief material and with much needed information at the grass root level.”

Sarika signs off by saying, “I believe you can change anything if you are able to motivate yourself. Public service is like a habit in its essence”.