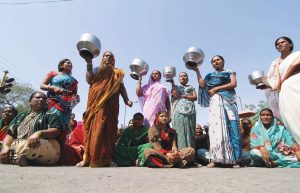 By 2020, 21 Indian cities are expected to reach groundwater levels of zero, which will affect water access for 100 million people. Nearly half of India is already under drought during the summertime, and the current water crisis in Chennai is the latest example of what could soon happen to the country. The new government is trying to address water issues in its newest ministry, “Jal Shakti — Water Power.” It promises to bring all the departments on water issues under one minister. (Earlier it was known as Ministry of water resources, river development and Ganga rejuvenation.)

The focus of the new ministry is to expedite its program of linking the rivers of India and to ensure piped water in every Indian household by 2024. This is not a new concept; many state’s government have tried providing running water to households, without much success. That’s because approximately 85 percent of current rural water supply schemes are based on groundwater sources that are not perennial.

A drinking-water tank constructed by the Department of Public Health and Engineering is still vacant after five years in my neighboring village Gopalpura in Rajasthan. It is connected to a dried borewell through a pipe-line. Because groundwater levels fall in more than half of the country, millions of people are getting insufficient or poor water quality. As a consequence, communities depend on a single or remote source of drinking water, often leading to conflicts and enhanced discrimination against significant fetchers of water, such as females and girls.

Another omnipresent reality is the wasting of water even in water-stressed region by general masses. For hours, you can see the flowing public pipe lines in the drainages or roads without tapping.

The new ministry needs to think ‘small’ in order to really provide water security for India. It must restore the bodies of water and recharge its groundwater. Only when our drinking water supply is based on perennial surface water sources can our drinking water-security be achieved.

Rural India still has enormous potential for soil and water conservation. Government should encourage CSOs and CSRs to play an active role in managing rainwater at farmer and  household level. Panchayat or District authorities should restore water resources at community level.

Currently, water transport from water-rich districts or states is presented as a water crisis solution. I believe that this is a short-term emergency solution, but not a sustainable solution. For a decade, nearly 150 kilometers away, the town of Jaipur imported water from Bisalpur in Tonk. Now, however, the Bisalpur dam itself is not getting filled— and plans are being made by the local govt to bring water from the Brahmani and Chambal Rivers there. Who knows, these rivers will need water from somewhere else after how many days. It’s an endless game that will definitely result in disputes between donor district, state or basin, and recipients.

Misuse of this imported water is one of the most serious offenses. Users in cities generally don’t know the value of this water and use it in car washing, showers, street cleaning etc. that could have watered many farmer’s fields.

The government must concentrate on managing demand. It should be three pronged strategies, first controlled-supply, second demand-control, and third long-term awareness. In the first step, the government must ensure a timely, leak-proof and safe-water supply rather than 24* 7 supply.

Second, government should encourage and assist consumers by subsidizing efficient water-use products such as sensor-tap accessories, automatic motor controller etc. at household level or drips / sprinklers for farmers. Current public subsidy systems are inefficient, require enormous paperwork and a lengthy process that discourages farmers from adopting fresh irrigation techniques. Controlling water usage at irrigation level without affecting the country’s food safety, is the most significant consideration as it consumes 85% of groundwater .

I work with more than a thousand farmers in Rajasthan who in the last four years have effectively implemented sprinkler techniques. The findings obtained are a 40 percent decrease in water consumption for irrigation per acre, a 30 percent decrease in water loss during irrigation conveyance, which in turn needs less energy for water pumping, an 80 percent decrease in human labor time needed for irrigation per acre, which indirectly decreases weeding time and fertilizer application and agricultural earnings increased by 20% per acre, as crop yields and quality improved by decreasing soil salinity, fewer pest and disease raids, and less weed competition. Surprisingly, the drudgery of women life has been reduced drastically, as she is the one who devotes her time in agriculture but never credited the title of a farmer.

Third, water-literacy at the national level should be the primary focus, which has not been seriously done so far. It is high time that special modules are introduced in classrooms on water saving, conservation. The government’s water-related schemes should be known to higher-secondary and college-level youth in order to inform and influence their parents and become concerned. Instead of being an annual or monthly occurrence, efficient water literacy should be the component of our education system.

The Government of India should mandate all local authorities to publish within six months maps of water bodies under their jurisdiction. These documents should be demarcated, notified and gazetted by the revenue department. “No-change in land use” for these water bodies, lakes, rivulets, rivers, drains etc. should be permitted at any cost. Government should also limit the use of waterfront and water bodies, along with rules for the extraction and recharge of groundwater. It should list all forbidden operations, such as unscientific sand mining, dredging and embellishment, etc. that could endanger a water body, should be recognized as offenses charged with maximum penalties under the appropriate Indian Penal Code.

Rivers are being murdered because of their sand. The government must identify the sand’s alternative as a construction material. Imports of sand may be a short-term solution if realistically possible. After all we don’t want our rivers last pictures to be hanged on our home walls.

The new government should launch an aggressive program of nature-based solutions, ecological restoration, ideally to build resilience and generate livelihoods. The philosophy of the new Jal Shakti Ministry should be to preserve river catchments, curb pollution load on the river, and establish a balance between aquifer recharge and discharge.

Maulik Sisodia is the executive director of Tarun Bharat Sangh, a water-focused Indian development CSO. Views expressed are his own

It’s up to us all to fight out coronavirus and not panic!