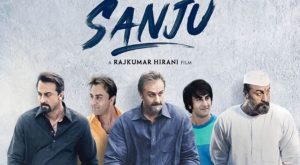 A selective recounting of the life of Sanjay Dutt, the film is continuing to break all kinds of box office records, including those set by Baahubali and Baahubali 2, both genre-defining movies. It has already clocked 200 crores in business worldwide, and its business is growing every day. Testimony to its success is the fact that Sanju has brought in family audiences in huge numbers, surprising for a film that shows rampant drug abuse. Riding on a remarkably brilliant performance by Ranbir Kapoor who has brought alive a living person with accuracy and deft, and scintillating onscreen camaraderie that he shares with Vicky Kaushal, an important character. This melodramatic and somewhat manipulative tale of India’s most controversial movie star has drawn audiences by the hordes. Therein lies, the most important insight that this film’s success offers- India’s moviegoers couldn’t care less if a celebrity is a criminal or sociopath. So long as a film is entertaining, a celebrity’s life and his deeds are given leeway. In brief, as a nation, we forgive famous folk easily.

Niharika Mallimadugula, an ethnographic researcher and consummate movie buff, succinctly explains the Sanju effect on audiences. “Hirani is a clever director; he knows the formula for a box office success. And there is little space for characters that go beyond a certain line of grey in his films. In Sanju, he has picked those qualities that make the protagonist flawed. Drugs? Yes. Indiscriminate sex? Yes. Criminal. No. The acceptance of these flaws and the struggles accompanying them completely endear the man to us. And Hirani knows a guilty heart; we all feel it. Ultimately whether Sanju is a whitewash of Dutt’s darker life or not, becomes secondary. Because Hirani has given the audience what they want to see in a film.”

Her reaction to the film points towards the impact of Sanju and India’s penchant for ignoring the negative side of cinema idols and celebrities. Sanjay Dutt’s sentencing under TADA for possession of an illegal weapon might be open to debate, but his life choices, despite being born in privilege, can’t be wished away. His promiscuity can be marked as personal choice. However, his reasons for picking up a drug habit and acquiring a gun make no sense. Yet, Hirani has successfully portrayed Sanju as an emotional, impulsive person who has suffered beyond his crime. The filmmaker, genius at writing with his co-writer Abhijat Joshi and at portraying heavy-duty emotions, hints subtly at Sanju’s incredible suffering. He has also maligned the media for being judgemental and sensationalist around Sanjay Dutt’s involvement with the Mumbai underworld. Dutt’s mistakes and near criminal choices are known to most. The information has been in the public domain and his prison sentences have been well documented by the media. None of this has been a deterrent in audiences choosing to buy a ticket. In the end, a celebrity’s life seems above normal standards of morality.

It wouldn’t be fair to state that watching Sanju indicates that audiences have forgiven him or sympathized with him. Like Monica Nagar writes on Facebook, “Great job done by Ranbir Kapoor, big applause. Very good example of careless behaviour and what it can lead you to.” But their curiosity to savour every detail of Sanjay Dutt’s impulsive, careless life has definitely been overwhelming. Sanju has become a talking point for those who have seen the film, and are yet to see it.

India’s record of forgiving or simply ignoring bad behaviour by celebrities is not limited to Sanjay Dutt. Salman Khan has had episodes of criminal behaviour and run-ins with the law, including an inexplicable car ride that didn’t seem to have a driver at all. He escaped a guilty verdict in the hit and run case and continues to face trial for his hunting of a black buck in Rajasthan. Yet, every Salman Khan film, including the rather pedestrian Race 3 goes on to become a blockbuster. It’s almost as if his bad boy image is the biggest draw for a section of audiences. And making apologies for his routine rudeness with the press or arrogant behaviour is not limited to his film industry friends or cronies. It extends to virulent followers on social media that will troll anyone that dare criticise Salman Bhai.

Behaviour that might be inexcusable in a regular Joe or Jane is brushed under the carpet for a celebrity. Blaming a section of popular media or some powerful people close to an errant celebrity doesn’t explain the public’s penchant for letting go of celebrity bad behaviour. What it reflects is an inherent soft corner that many of us have for the really rich and famous- an underlying aspirationalism that overrides logic and reason. That Sanju is getting massive public interest is a reflection of this very tendency that Indians display repeatedly.