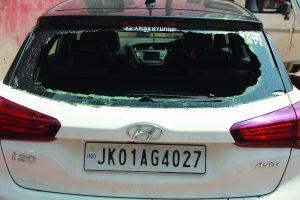 On the night of July 25, some unknown assailants walked into the parking space of Srinagar’s Press Enclave and broke the windscreens of the vehicles parked there. Some vehicles were vandalised and the cabinets searched, although nothing was stolen.

The incident has followed a month after the killing of the senior journalist Shujaat Bukhari at the very enclave. Bukhari along with his two guards was also shot dead by unidentified gunmen moments after he came down from his office and got on to his vehicle to head to his home.

These are tough times for the journalists in Kashmir.  There are visible and invisible threats – more so, for the local media whose content becomes a subject of daily contention among the warring parties. And should any party choose to see anything wrong in a story, covert or overt threats follow.

Recently, a  journalist working for Kashmir Observer Auqib Javeed was summoned to New Delhi by National Investigation Agency for interviewing the woman separatist leader Asiya Andrabi. The interview was carried by a local magazine Kashmir Ink. Javeed was grilled over three days for the interview and subsequently, let off.

Javeed’s questioning generated an outcry by the international journalist organizations. “Questioning Auqib Javeed without a lawyer and trying to force Greater Kashmir to submit raw reporting material is a serious attack on press freedom in the turbulent state of Jammu and Kashmir,” said Steven Butler, CPJ’s Asia program coordinator in Washington, D.C. “These attempts to intimidate journalists will only force the flow of news and information to grind to a halt.”

Similarly, in a statement, Indian Journalist Union president S N Sinha, who is also Secretary General and member of Press Council of India, Amar Devulapalli, and Vice-president Sabina Inderjit said the summons to Auqib Javeed amounted to an attack on freedom of the press and meant to intimidate journalists who were already working under difficult circumstances.

But such statements have made little redeeming difference to the prevailing scary state of affairs, as the mysterious breaking of the windscreens of the cars would have us believe. What is more, in recent past, security agencies have been keeping strict tabs on the content being published and trying to weigh it through the binary of “anti-national versus anti-national.”

Editors privately say they intermittently get notices about the content and are asked to explain it. Similarly, they can’t ignore the statements issued by the separatist organizations.

“In a sense, we are being victimized for just doing our job,” said an editor of a local daily. “In a conflict situation, you have to give space to every party and also tell stories of the people. One party shouldn’t and can’t expect us to stop giving coverage to another”.

What makes the situation further fragile is that there is still no knowing who killed Bukhari and why. Police has blamed Lashkar-i-Toiba and identified three of its militants who have allegedly carried out the murder. But Lashkar on its part has vehemently denied any role in the killing and compared police investigation into the case to a “Bollywood movie.”

This has created an uncertain and a dangerous environment for the journalism to operate in. “It is a fraught situation where danger lurks in the shadows. The actors involved are operating behind the scenes,” said another editor. “We expect all the parties to appreciate the difficult circumstances under which journalists operate in the state and how it is important to bear with us and allow us to objectively report the extraordinary situation prevailing on the ground.”