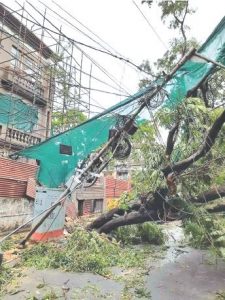 The fury of Super Cyclone Amphan, which has battered lives and livelihoods in parts of West Bengal, has been more destructive than the cyclone Bulbul (2019) and Alia (2009), killing more than 86 people and counting. Besides the unprecedented damage in the entire South Bengal, North and South 24 Paraganas stretched to Sundarbans remain worst affected and inaccessible where around millions of people have been displaced, lakhs of trees being uprooted and acres of lands and forest submerged.

There is inadequate information about the extent of damage in Sunderbans since all the means of communication are snapped due to the cyclone. There is still no count to exactly how many people lost their lives, or how much infrastructures was damaged.

Many villages are still under water in the Sundarbans, according to local people. The coastline that was ravaged after the Super Cyclone made a landfall in Sundarbans at the wind speed of 120 kmph, has adversely affected the fishermen and farmers who were primarily dependent on the aquaculture, agriculture and forestry for livelihood.

The world’s largest mangrove forest and one of Unesco World Heritage sites, Sundarbans, is the home to over four million population. Previous cyclones in this region had forced thousands of youth to migrate to other states after their crops were ravaged and flooded with saline water. Now, the cyclone Amphan that turned into a super cyclone has resulted in over four million people getting displaced, currently being sheltered by the state government in more than 500 shelter homes.

The people of Sunderbans are in distress over the loss of crops, farmlands, vegetables, fisheries and non-timber forest products which were the source of livelihood, shared Tanmoy Bhaduri, a noted environment journalist from Kolkata.

“Some local NGOs in Sunderbans are doing whatever they could do to provide them shelter, water, dry food, medicine  and basic amenities to the affected beside the state government. The situation is worse. I have been getting a lot of calls from people working outside West Bengal as migrant workers, inquiring about their families members in Sunderbans since the area remains incommunicado,” said Bhaduri.

The reporter tried to reach out to few local NGOs working in Sunderbans and South 24 Paraganas but was unable to establish contact due to communication blackout.

West Bengal Chief Minister Mamata Banerjee has announced a compensation of 2 lakh-2.5 lakh for the family members of the deceased. Even Prime Minister Narendra Modi has announced Rs.1,000 crore for the relief and rehabilitation after paying visit to the state and conducting an aerial survey of the cyclone-hit areas with CM Banerjee.

“Cyclone Amphan has left a trail of devastation beyond our thoughts. While the material damage is substantial, Bengal stands united in this time of crisis. Together we will overcome this because nothing can dampen the spirit and strength of the people of Bengal…We are working tirelessly to get things back to normal.We will get through this together,” said Mamata Banerjee.

The locals believe due to the lack of cooperation between the different departments such as the disaster management, electricity department, municipality, etc. they faced a deluge of problems. This resulted in chaos as the common people were left without basic amenities such as water, electricity and even mobile networks. Huge protests erupted in Kolkata and other parts of the state after the people struggled to get basic services. They said they faced extreme hardship as even water was not available to drink. The Chief Minister Mamta Banerjee, however, assured the citizens that the teams were working round the clock to restore essential services and urged for patience. “This is huge disaster. Our teams are working very seriously. At least 1,000 teams are working in the state. Along with them local youths are also working,” Banerjee said on 23 May.

Bhaduri also lamented the carelessness of the authorities on social media saying, “Many parts of the West Bengal are still without any basic amenities. The electricity service was restored after three nights in my locality. There are lakhs of people still living in cyclone shelters. The embankments have been washed away, hundreds of villages completely submerged in saline water, the situation is worse than cyclone Aila in Sunderbans.” 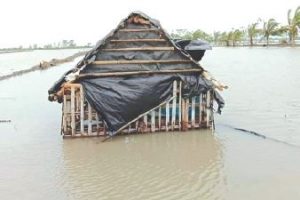 The cyclone ravaged homes and properties as it passed through the areas of Kolkata, Hooghly, North and South 24 Parganas. It is estimated that in North 24 Parganas alone, over 5,000 houses were destroyed, while trees were uprooted and homes destroyed in Kolkata.

The department of disaster management of the government of West Bengal had envisaged the construction of 50 Multipurpose Cyclone Shelters (MPCS) to be constructed under National Disaster Management Authority (NMDA). These shelters were to be constructed in three districts. The objectives of MPCS are to provide minimum two sq. ft. of usable space for safe shelter to the vulnerable people at the time of disaster through disaster resistant concrete structures. MCPS is also planned to save human lives and livestock and to ensure their sustenance by providing basic needs such as electricity, drinking water and sanitation during cyclones and storm surge.

Besides, the MCPS is planned to safeguard basic assets needed by the people to survive after cyclone. The shelters are to be used as integrated service delivery centres such as immunisation programmes, feeding, social, cultural and educational programmes and to develop these MPCSs as a centre of community preparedness through active participation of vulnerable communities, according to the website of the government of WB.

The West Bengal government has also urged the Indian Army, railways and ports for helping in rehabilitation and rescue in the state. Gauging the extent of destruction, the state may need a humongous manpower for restoring essential infrastructure and services in the cyclone-ravaged areas. The state government claimed that it had mobilised maximum strength in a unified command mode for immediate restoration of essential infrastructure and services. Thanks to the timely warnings Indian Meteorological Department, the loss due to the super cyclone could have been more worse than this. Early warning helped save lives on a tremendous scale, however, when it comes to infrastructure, little can be done about that. 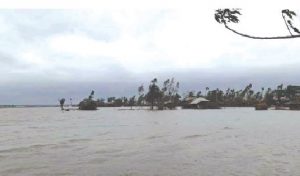 As the cyclone has passed, the city is struggling to get back to normal and restore services for the citizens which were left cut-off by the severe winds. According to reports, the mobile connectivity has been restored in most of the places while the restoration of electricity is taking time. With over 4.5 million people affected, the path to normalcy is going to be a difficult one for the West Bengal government. The experts are also saying the Covid-19 lockdown may have helped in ensuring the least number of casualties during the cyclone. However, they also fear the water-logging could exacerbate the risk of infection of SARS-CoV-2 virus in sewage water or biomedical waste. The lockdown may have helped save lives, the water-logging however presents a new challenge as it could increase the infection rate.

The authorities managed to evacuate lakhs of people from the coasts well in time before the cyclone Amphan struck. However, the evacuated population had to be adjusted in shelters which were being used as Covid-19 quarantine centres and that created a complication. The people were huddled into the same shelters at many places increasing the risk of coronavirus transmission. The consequences could be seen as the infection rates started to spike in West Bengal and Odisha post the Amphan cyclone disaster. The authorities said it will take at least one week for them to restore all the services to the people. However, it will take massive help from the government to rebuild more than five lakh homes ravaged by the super cyclone.