Taibur Gayen, a CPI (M) supporter was killed and two others were injured when crude bombs were thrown at them allegedly by TMC supporters at Amdanga.

Ariful Gazi (a TMC supporter) was shot dead in Kultali when he was going toward a booth. He was allegedly attacked by Socialist Unity Centre of India (SUCI) supporters.

“We are patrolling with forces. We have detained a couple of people. The situation is under control so the voters can continue to vote and have nothing to fear,” said Additional SP Baruipur Sandeep Mondal.

Uttar Ghazipur booths 100 and 102 were allegedly captured during the morning violence. According to an eyewitness, the two groups – one belonging to the JJPOBC and the other, TMC faced off each other just past 7 am and started pelting stones at each other. The booth was subsequently captured by the TMC, alleged members of the JJPOBC.

BJP has accused ruling party TMC of letting loose a reign of terror in several parts of the district, especially in Amdanga area.

However, Jyotipriyo Mullick (senior minister) has denied the involvement of the TMC in the incident and accused BJP of terrorizing the voters. 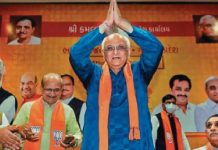