The Shiv Sena on Tuesday accused the BJP for its ouster from the National Democratic Alliance (NDA). In its mouthpiece, Saamana, the Shiv Sena went back in time and said Balasaheb Thackeray formed the NDA along with others at a time when Hindutva was not talked about.

“We supported Hindutva at a time when nobody touched it… when you were not even born,” the editorial in the Marathi daily read.

The Sena also accused the BJP of throwing it out of the NDA on death anniversary of Balasaheb Thackeray.

The political crisis in Maharashtra intensified after the BJP conceded its inability to form the government in state despite having the mandate for its pre-poll alliance with Shiv Sena.

A day ahead of Winter Session of Parliament, the Sena refused to attend a meeting of NDA constituents. Rajya Sabha MP and spokesperson, Sanjay Raut had said that the party would sit in the opposition benches in Parliament. 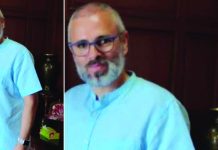