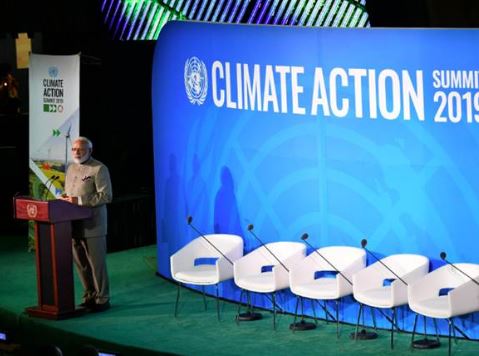 World leaders had gathered in New York on Monday for the United Nations Secretary General (UNSG) Climate Action Summit. The Summit is being called by UNSG António Guterres to ramp up climate actions worldwide. Speaking on the occasion, Prime Minister Narendra Modi stated “We must accept that if we have to overcome a serious challenge like climate change, then what we are doing at the moment is just not enough. What is needed today, is a comprehensive approach which covers everything from education to values, and from lifestyle to developmental philosophy”.

PM expressed that an ounce of practice is worth more than a ton of preaching. “In India, we are going to increase the share of non-fossil fuels to 175GW by 2022, and to further increase it to 450GW”, announced Narendra Modi.

“We have launched the Jal Jeevan mission for water conservation, rainwater harvesting and for the development of water resources. India is going to spend approximately 50 billion dollars on this in the next few years”, the Prime Minister informed the gathering.

“On the International forum, almost 80 countries have joined our International Solar Alliance campaign. In order to make our infrastructure disaster resilient, India is launching a Coalition for Disaster Resilient Infrastructure.”, the PM invited UN Member states to join this coalition.

Earlier in his thought-provoking opening remarks the United Nations Secretary-General, António Guterres shed light on the significance of science and technology and its use as a powerful tool in combating climate change. “The climate crisis is caused by us and the solutions must come from us. We have the tools, technology is on our side, readily available technological substitutions already exists for more than 70% of today’s emissions”, said Guterres.

Having the key focus on raising ambition and accelerate action to implement the Paris Agreement, the Climate Action Summit focuses on nine interdependent tracks, which are led by 19 countries in total and are supported by international organizations. The Summit has brought together governments, private sector, civil society, local authorities and other international organizations to develop ambitious solutions in actionable areas. The Secretary-General has also prioritized a number of action portfolios.

It is noteworthy to point that India along with Sweden, supported by World Economic Forum is leading the ‘Industry Transition’ track meeting. India and Sweden together with other partners are launching the Leadership group within the Industry transition track. This initiative will provide a platform for governments and the private sector with opportunities for cooperation in the area of Technology innovation. This will help to develop low carbon pathways for industry.