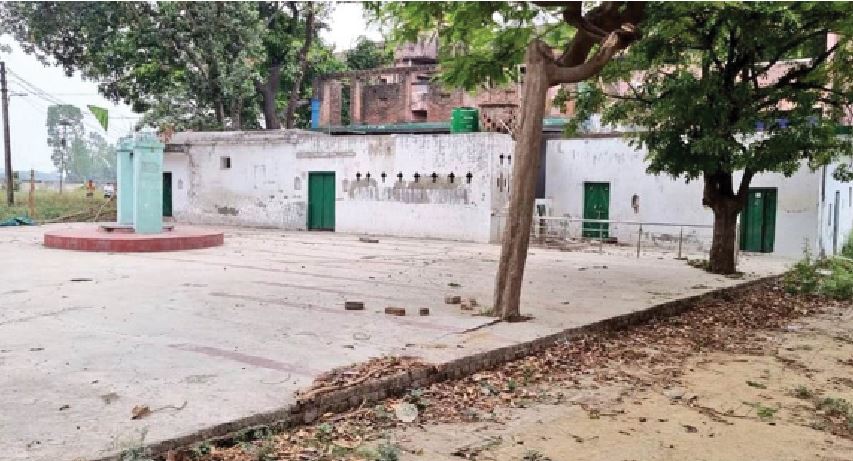 BJP-led Uttar Pradesh govt once again faces criticism over an alleged hasty and unlawful demolition of the Barabanki mosque in the garb of removing roadside religious structure in compliance of High Court orders of 2016, reports MUDIT MATHUR

In the night hours of May 17, the overcharged administration of Barabanki district bulldozed another mosque in Uttar Pradesh, after 29 years of destruction of the Babri mosque in Ayodhya by saffron brigade. Nearing elections to the next assembly in the state such incidents could be part of a larger strategy aiming at polarization in the cow belt politics that had suffered enough in terms of development and economic growth.

The nation had witnessed deep communal divide and riots leading to the mass scale bloodbath in an aftermath of demolition of Ayodhya’s Babri Mosque in 1992. The Bharatiya Janata Party-led Uttar Pradesh Yogi Adityanath government has once again came under global criticism in the media over hasty unlawful demolition of a mosque in the garb of removing the roadside religious structure in compliance of High Court orders of 2016.

The demolition using JCB machines was carried out by the administration in the night, during lockdown at Ram Sanehi Ghat Tehsil compound, situated on the outskirts of Barabanki district near the passing highway connecting Ayodhya from the state’s capital, Lucknow.

The High Court of Allahabad on April 24 in view of the pandemic had directed that any orders of eviction, dispossession or demolition, already passed by the High Court, District Court or Civil Court, if not executed till the date of passing of this order shall remain in abeyance for the period till 31.05.2021. But in utter violation of clear restrain orders dated April 24 and without following time-bound statutory steps, the highhanded act of demolition was maliciously conceived, ordered and executed by overcharged administration of Barabanki district with an aim to please the chief minister, Yogi Adityanath, a brand of intransigent “Hindutva.”

The District Magistrate Barabanki, Dr Adarsh Singh, who earlier worked in close proximity with the chief minister as his special secretary, preferred to be in non-committal mode to accept that the demolished structure was a registered as a Waqf property in the records as a worship place (Mosque) and had decades-long existence on the site. In his pre-recorded official statement posted on his twitter handle specifically avoided to call it a religious structure and narrated it as an “illegally encroached residential structure in the Tehsil premises of Ram Sanehi Ghat.”

Surprisingly, the act of the administration reflected totally a contrary stand before the High Court when office bearers of mosque committee (now frighteningly absconding due to police lookout in a cheating case) approached the Lucknow Bench of the Allahabad High Court filing a writ petition with reasonable apprehension of demolition of mosque soon after they received notice on March 15, 2021. Days after demolition of the mosque, the local police lodged a case against eight people for alleged fraud and cheating to get the structure registered as a property of the Uttar Pradesh Sunni Central Waqf Board in 2019.

The then UP Sunni Central Waqf Board Inspector Mohammad Taha is also among the eight accused named in the alleged fraud. Other seven include the committee Chairman Mushtaq Ali, Vice President Vakil Ahmed, Secretary Mohammad Anees and members Mohammad Mustakim, Dastgir and Afzal. The complaint says that these people formed a “committee” and through cheating and fraud got the structure registered as a Waqf property on January 5, 2019. Meanwhile, on May 21, the state government appointed three member enquiry committee, headed by special secretary Shiva Kant Dwivedi, to investigate how such a registration on the basis of fake documents got registered in Waqf board.

The local residents confess the facts that indicate re-registration of the same Waqf property without any knowledge of its prior registration done by its then committee in the year 1968. The newly formed body appears to be ignorant about it as old Mutwalli/manager Anwar Ahmed reportedly died and its registration papers and other records gone missing with people who were now managing religious affairs of the mosque.

But its existence found mention in various revenue and consolidation records. They say in Islamic traditions, we cannot raise a mosque on somebody else land and land has to be donated or owned by their own community.

Prior to action initiated against them, they had challenged the notice served on them purportedly to ensure compliance of an earlier orders of the High Court dated June 3, 2016 which contains a direction that if any religious structure has been raised encroaching upon public road (includinghighways), street, lane etc. as before 01.01.2011, a scheme shall be worked out and executed to shift the same to a private land to be offered by the beneficiaries of such religious structures or persons responsible for its management or to remove it. Their counsel pleaded that the notice has been issued with an intention to demolish the mosque without complying and ensuring the above contained directions. 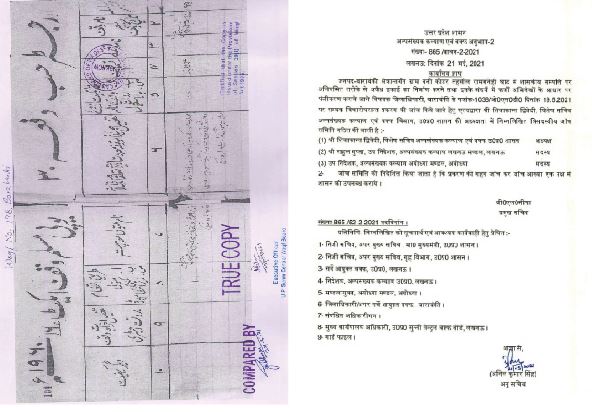 The stand of the local administration put forth before the division bench of Justice Devendra Kumar Upadhyaya and Justice Manish Kumarthrough written instructions from the Joint Magistrate/ Sub-Divisional Officer, Ram Sanehi Ghat,that Managing Committee of the Waqf has been given a notice requiring to furnish documentary evidence and notice is not for demolition. Letter of the Sub-Divisional Officer Divyanshu Patel dated 18th March, 2021 explain, “besides the mosque certain other constructions have illegally been raised which include residential rooms as well.”

Relying the categorical assertions on behalf of administration that the impugned notice has been issued only to solicit the evidence/the documentary evidence and not for demolition, the High Courtaccordingly, disposed of the petition saying “apprehension of the petitioner expresse din this writ petition is, thus, unfounded.” So, there is clear admission on the face of records of the Court by the local administration that besides“mosque” certain other constructions including residential rooms have been illegally raised.

In the light of their own assertions before the high court,the conduct of demolition of mosque itself raises questions of judicial propriety and expose volumes of malafide exercise of powers and arbitrary behaviour contravening directions of High Court restraining demolitions during pandemic until May 31, 2021.

The Masjid is located in the tehsil building complex in Ram Sanehi Ghat, and existed in front of sub-divisional magistrate’s residence. The mosque is registered under section 29 of Muslim Waqfs Act XVI of 1960 with the Uttar Pradesh Sunni Central Board of Waqfs Lucknow, bearing registration number 198 of 1968 as Waqf property since May 17, 1968. This registration certificate was issued in the name of Anwar Ahmed as its Mutwalli/manager of Masjid tehsil Ram Sanehi Ghat, situated in district Barabanki where a room is also shown along the mosque. The electricity bill records of the mosque too demonstrate that electricity connection was installed on 1st April 1959, which could suggest that the mosque is over six decades old. A land survey document from 1991 also records the existence of the mosque and consolidation records could not be accessed by TEHELKA due to ongoing lockdown.

The Uttar Pradesh Sunni Central Waqf Board issued a statement the next day, calling the demolition an “act against law and misuse of power in the name of anti-encroachment drive.” While condemning the administration over demolition of mosque, the chairman of the board Zafar Faruqi said that they would file a writ petition in the Allahabad High Court for restoration of mosque at its site and impartial judicial probe to punish guilty officers. He claimed that the mosque was century old. The All-India Muslim Law Board (AIMPLB) working general secretary Maulana Khalid Saifullah Rehmani also supported demand for a judicial probe.

A social activist and law student Syed Farooq Ahmad who resides nearby narrated the ordeal of local residents, how they were deprived from coming to this mosque for the last two months as police officials barricaded the entrance to the mosque, closing it for public entry.“People from the area thoughtfully recall their grandfathers and great-grandfathers frequenting visiting it,” Ahmed reminded. “several people protesting the closure of the Masjid Gareeb Nawaz in Ram Sanehi Ghat were arrested on 19 March. The Imam Mustafa told media that there was “an atmosphere of terror” in the area now and that many Muslim locals had fled their homes,” he added. Some locals who vent their protests on social media alleging biased attitude shown by local SDM were also booked for their post.

Samajwadi Party chief Akhilesh Yadav demanded a judicial probe into the demolition of the Barabanki mosque and called for its restoration. “With Assembly polls approaching, BJP has activated communal tension in the state just the way it has been doing its politics by destroying the “Ganga-Jamuni” (composite)  culture of the state,” he commented.

“We demand strict action against the officials working against the law and hurting the religious sentiments of the people and inflicting criminal case on them. We also demand a judicial probe by a sitting high court judge and the reconstruction of the mosque on the site,” said state Congress chief Ajay

Kumar Lallu, who was leading a delegation to visit the spot. Congress delegation was stopped by the police and administrative officials in Barabanki and all the party men were forced to return back. Prominent national Dalit leader of Congress PL Punia also accompanied the delegation with his supporters.

Muslim scholars and leaders pacified the hurt feelings of their community and adopted judicial route to restore their fundamental rights to go to a place of their choice for worship without indulging into any efforts aimed at communal flare-up. 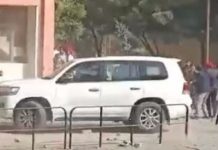