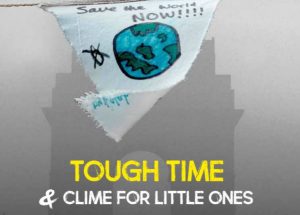 When most Indian media is infested with political news in the aftermath of Maharashtra chaos, we at Tehelka decided to do a cover story on the devastating impact climate change will have on our toddlers’ health.  Our cover story “A reality check: How climate change is affecting our kids” points to an impending apocalypse which is looming large as efforts to reduce gaseous emissions fall short of the aim to keep the change in temperature at 2°C, as per the Paris agreement.

The result of this criminal failure can be seen in the global warming, swirling rivers, floods and droughts at the same time, large incident of wildfires and melting glaciers. The acceleration of toxic emissions has led to a spike in dengue, diarrhea, cholera and other infectious diseases particularly affecting the children.

As per a new report published in the world’s independent medical research journal The Lancet, is a collaboration  between 120 experts from 35 institutions, including the World Health Organization, University College London, and the Tsinghua University in Beijing, children will suffer most from the rise in infectious diseases.

Nothing short of a 7.4 per cent year-on-year cut in fossil CO2 emissions from 2019 to 2050 will limit global warming to the more ambitious goal of 1.5°C. The report suggests that a child born today will face a world on average over 4˚C warmer by their 71st birthday.

Researchers point out that children are particularly vulnerable to the health risks of a changing climate because their bodies and immune systems are still developing leaving them more susceptible to diseases and environmental pollutants.

Also the damage done in early childhood is persistent and pervasive, with health consequences lasting for a lifetime. There is an urgent need for action from all countries to cut greenhouse gas emissions to ensure wellbeing of children, as the climate change will come to define the health of an entire generation.

The report also warns that as temperatures rise, harvests will shrink, food security with be threatened driving up food prices hitting the next generation. The challenge is grave and there is dire need to dramatically reduce emissions by 2050 to meet Sustainable Development Goals. We shall also have to shun coal and give a push to renewable energy.

The announcement by Prime Minister Narendra Modi at the recently concluded United Nations Climate Action Summit committing to increasing India’s renewable energy (RE) target to 450 gig watts as a part of a stronger climate action plan, gives some hope amid all the chaos. Rightly, “Need, not greed” and “an ounce of practice is worth more than a ton of preaching” has been the guiding principle of India to tackle climate change.