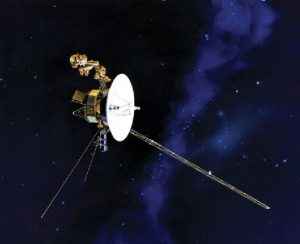 The humanity’s longest running space mission, Voyager 2, has exited the solar system, becoming only the second spacecraft ever to achieve this tremendous feet. After a meticulous analysis of the data sent by the spacecraft’s instruments, the mission scientists at NASA have concluded Voyager 2 crossed the outer edge of the heliosphere on November 5, 2018. Heliosphere is the outer bubble that surrounds our solar system, consisting of particles and magnetic fields created by the sun.

The sibling of the probe Voyager 1 had already left the solar system in 2012. Launched in 1977 with just a gap of 15 days, the two probes are now more than 18 billion kilometres from earth. The spacecraft are so far that a command sent from earth takes 16.7 hours to reach them, at the speed of light. For a comparison, it takes eight minutes for the light to reach the earth’s surface. Hurtling out of the solar system at 34,000 miles per hour, the spacecraft have been travelling for more than 42 years now. Incredible! Isn’t it?

The Nature Astronomy journal this week described the findings as Voyager 2 left the boundary of the solar system. The instruments aboard the spacecraft encountered a dramatic reduction in the heliospheric particles, while the rate of cosmic rays increased significantly and have since been constant. This observation led the scientists to conclude Voyager 2, like its predecessor Voyager 1, had exited the solar system. It was for the first time that scientists were able to directly observe the electrically charged hazes, called the plasmas, which fills the boundary of the solar system and the interstellar space.

The probe as it interacted with the particles near the boundary of our solar system sent back critical scientific data, helping us more understand the nature of that region and the interstellar matter. The project scientist for Voyager Ed Stone described the importance of the data, saying, “The Voyager probes are showing us how our Sun interacts with the stuff that fills most of the space between stars in the Milky Way galaxy. Without this new data from Voyager 2, we wouldn’t know if what we were seeing with Voyager 1 was characteristic of the entire heliosphere or specific just to the location and time when it crossed.”

The Plasma Science Experiment (PLS)instrument onboard the Voyager 2 craft provided a clear evidence to the teams here on earth. Using the electrical current of the plasma to detect the speed, density, temperature, pressure and flux of the solar wind,the PLS witnessed a steep decline in the speed of the solar wind particles on November 5. The instrument, according to NASA, observed no solar wind since then, which is a compelling evidence for the scientists to conclude the probe had left the solar system.

Journey of the Voyagers

During the 1970s, scientists at NASA made an ingenious discovery of a Once-in-a lifetime-alignment of the planets of our solar system. The planets in this alignment fall in a line, and therefore, it was possible for the spacecraft to visit all of them one after another, in the shortest possible time. The spacecraft can use the gravity of each planet to swing itself to the next planet, the manoeuvre is called the Gravitational Slingshot. The technique is so useful that it is used for every interplanetary mission nowadays and saves a lot of fuel for the craft to travel great distances.

The unique alignment is said to occur once ever 176 years, so unsurprisingly this was a rare moment for the scientists at NASA. Taking advantage of this special alignment, the Voyagers were sent on a journey towards the bigger planets, even Uranus and Neptune. While Voyager 2 visited Jupiter, Saturn, Uranus and Neptune, Voyager 1 was directed to explore Jupiter and Saturn. The images of the planets sent back by these spacecraft have since been extensively used for school textbooks and scientific research. The twin spacecraft went to the corners of our solar system which no one could even dream of going, lasting more than four decades to the scientific community’s shock. The spacecraft were only designed to operate for just five years.

The Voyagers were originally sent for the exploration of Jupiter and Saturn. The probes made startling discoveries on these planets, including thefinding of active volcanoes on Jupiter’s moon Io and the study of Saturn’s rings, besides a plethora of other findings.

As the spacecraft kept going on, NASA decided to send Voyager 2 to explore Uranus and Neptune, the planets which have only been visited by the Voyager 2 probe. Now with over four decades of pathbreaking science, the probes were deployed for a more challenging mission, called the Voyager Interstellar Mission (VIM), under which they were to explore the outermost edge of the Sun‘s domain. And beyond.

According to NASA, “the mission objective of the Voyager Interstellar Mission (VIM) is to extend the NASA exploration of the solar system beyond the neighbourhood of the outer planets to the outer limits of the Sun‘s sphere of influence, and possibly beyond.”

The information returned by the Voyagers of our outer solar system has revolutionised our understanding and knowledge of our neighbourhood. The incredible craft which outlived their original lifetimes by more than eight times have significantly contributed to our knowledge of the planetary astronomy.

How far will the Voyagers go?

The scientists at NASA estimate the fuel on the spacecraft to last at least about another five years. After they exhaust all fuel, the vintage systems on the craft will turn off, but the craft will continue to travel in the interstellar space, but without us. NASA’s Ed Stone, while addressing conference on October 31 said, the spacecraft was “cooling off, they are getting colder all the time and the power is dropping.”

He said that the Voyagers may not have enough power to continue running scientific instruments after five years. NASA is equally stunned with the instruments onboard the Voyagers which continue to work for more than 40 years now — Voyager 2 has five operational instruments, while Voyager 1 has four. These instruments, according to NASA, were designed to last just four years.

The Voyagers are powered by Radioisotope Thermoelectric Generators (RTGs), which have served the these probes for years in their humongous journey. These generators run on the plutonium isotope, a rare element. However, the power from these generators has started to drop and the scientists have had to shut down several instruments in the last few decades to save power and let the probes continue in their journey. The thrusters, which allow the probes to change direction, have reportedly started to degrade. And luckily, the communication system is still working on both the probes, obviously, the most important ones. The cosmic ray instrument onboard the Voyager 2 was shut down this year to help the probe save power.

Running perpetually driven by the power of 1970s technology, the Voyagers run on extremely low power, estimated to be equivalent to today’s fridge light. The duo is headed into the interstellar space and the spacecraft may encounter the nearest star in 40,000 years with such speed. The humanity will forever be grateful for the incredible scientific data they keep beaming back to earth, enhancing our knowledge of the cosmos and igniting our imagination. The Voyagers are a testimony to the humanity’s insatiable quest for the unknown and all that we can achieve if we only endeavour. Any new probes aimed for interstellar travel, even if sent now, will take decades to reach where the Voyagers are, it’s why these missions are special. Humanity, we can say, has established its presence in the space among the stars.