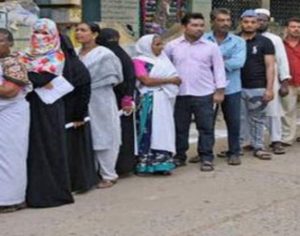 Polling is underway in Telangana on Friday to elect a new state Assembly amid tight security.

Polling began at 7 a.m. in all of the 119 constituencies in the first full-fledged elections in the state.

According to the officials, the polling process began in all 32,815 polling stations spread across 31 districts.

As per the reports, Voting began late in some polling centres due to technical glitches in Electronic Voting Machines (EVMs).

Over 2.8 crore voters, nearly half of them women are eligible to exercise their franchise in the state to decide the political fortunes of 1,821 candidates.

Telangana’s Chief Electoral Officer Rajat Kumar said polling will continue till 5 p.m. except in 13 constituencies classified as Left-Wing Extremist-affected, where the process ends at 4 pm itself.

More than 1.50 lakh polling officials are on duty to conduct the polling process.

In Telangana, the assembly polls were initially scheduled to be held simultaneously with the Lok Sabha elections next year, but the House was dissolved on September 6 as per a recommendation by the state cabinet.

The Congress has stitched together the ‘Prajakutami’ (People’s Front), the Telugu Desam Party (TDP), the Telangana Jana Samiti (TJS) and the Communist Party of India (CPI), to take on the ruling TRS, which is led by caretaker Chief Minister K Chandrasekhar Rao (KCR).

There is a close contest between ruling Telangana Rashtra Samithi (TRS), which is contesting all seats on its own, and the opposition Congress-led People’s Front.

The Bharatiya Janata Party (BJP), is contesting all seats on its own.