Polling began on Monday for the fourth phase of Lok Sabha election in 72 parliamentary constituencies spread across nine states.

Voting is underway in 13 each in Rajasthan and Uttar Pradesh, 17 seats in Maharashtra, eight in West Bengal, five in Bihar, six each in Madhya Pradesh and Odisha, three in Jharkhand and a part of the Anantnag constituency in Jammu and Kashmir.

In the first three phases, voting was held in 302 Lok Sabha constituencies and 168 more seats will go to polls in the last three phases.

The fate of 961 candidates will be decided in the fourth phase.

Voting is being conducted in seven phases between April 11-May 19. Results will be declared on May 23. 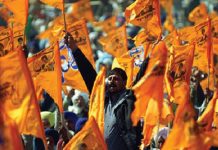