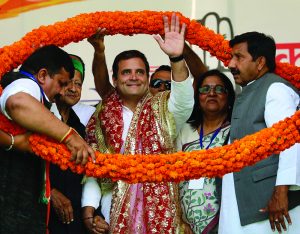 With rallies addressed by Prime Minister Narender Modi, Congress president Rahul Gandhi, BJP chief Amit Shah and Congress general secretary Priyanka Gandhi , the hilly state of Himachal is all set for the Lok Sabha polls, voting for which will be held in the last phase on May 19. Main contest is between ruling BJP and the Opposition Congress. BJP had won all the four seats in 2014 elections. Therefore, the polls are being seen as a big challenge for Jai Ram Thakur, young chief minister of the state to retain all the seats for his party, the BJP.

After many turns, the election has reached in the last phase of the electioneering. First, the BJP denied ticket to its stalwart 85-year-old former CM, Shanta Kumar. And then former union minister Sukh Ram quit BJP to join Congress along with his grandson Ashrey Sharma and also managed Congress ticket for him. Now Ashrey is contesting against one-time MP Ram Swaroop Sharma in Mandi, home district of CM Jai Ram Thakur.

This Lok Sabha elections have finally bid adieu to Shanta Kumar (85), who started his political career as a panch (panchayat member) in 1963 and was considered as one of the tallest leaders in Himachal Pradesh politics. The BJP has denied ticket to Shanta Kumar in Kangra and has fielded his close associate Kishan Kapoor, a Gaddi leader and a minister in the state BJP government. 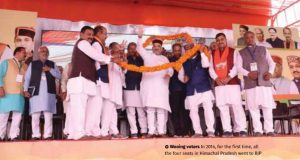 The BJP has made two changes this time and also fielded new face in Shimla reserve constituency. However, the biggest news is farewell of Shanta Kumar who ruled this hilly state twice as chief minister and was elected five times to the Parliament, which included his four time stint as member of Lok Sabha. Supporters of Shanta Kumar claim that their leader may be sent to Rajya Sabha after Lok Sabha elections. However, it seems that the electoral career of Shanta Kumar has ended.

The party has retained three time MP Anurag Thakur, its young face, from Hamirpur and Ram Swaroop Sharma, one-time MP from Mandi and has fielded Kishan Kapoor — a Gaddi leader — from Kangra which currently is represented by Shanta Kumar. Kapoor is considered to be a loyalist of Shanta Kumar.

Shanta Kumar had earned strong criticism when as CM he gave ordered firing on agitating apple farmers in Shimla district after which BJP was reduced to eight seats in the 68-member state assembly. He is also unlucky that BJP governments in his both terms as chief minister could not complete full five-year terms. It was also Shanta Kumar who crushed employees’ agitation in Himachal Pradesh as CM and employees never forgave him for this anti-employee action. Interestingly when Narendra Modi was Himachal BJP incharge, he helped Prem Dhumal become the state chief minister in 1998 and not Shanta Kumar.

The BJP has denied tickets to two of its sitting MPs this time. Besides Shanta Kumar, Virender Kashyap, a two-time MP from Shimla has also been not given ticket. Suresh Kashyap, who is a two time MLA from Pachhad, will be BJP’s candidate from Shimla reserve constituency. If both Suresh Kumar and Kishan Kapoor win their election, the state has to hold by-elections to these vacant seats. Kishan Kapoor is MLA from Dharamshala while Suresh Kashyap is MLA from Pachhad.

On the other hand, Congress has fielded all four candidates who didn’t contested in 2014 Lok Sabha elections. Two of them, however, have already contested parliamentary elections. Ram Lal Thakur, who has been given ticket from Hamirpur against BJP’s young turk Anurag Thakur, had fought thrice but could not win even once. In Shimla, the party has given ticket to former CWC member Col (Retd) Dhani Ram Shandil, who won on HVC ticket in 1999.

Another big happening in this election is shifting of loyalities by 94-year-old tall Brahmin leader Sukh Ram, who along with his grandson Ashrey has now joined the Congress and also managed ticket for him. Interestingly his son Anil Sharma remained a minister in the state BJP government even after his son got the Congress ticket. He had later quit as minister. However, he is still a BJP MLA and didn’t join the election campaign of his son Ashrey.

Congress has fielded two new faces. In Mandi, ticket has been given to Ashrey Sharma, grandson of Sukh Ram, who was cabinet minister in the then Narsimha Rao government at the Centre. Sukh Ram is considered to be opponent of former chief minister Virbhadra Singh. However, now he is hoping that Virbhadra Singh will support his grandson.

In Mandi, the BJP has repeated Ram Swaroop Sharma, a one time MP. However, Sukh Ram has now joined the Congress and this may affect the scenario on Mandi seat. Sukh Ram is considered to be a tall Brahmin leader in the region and has strong hold among the Rajputs. His move of joining Congress has made the contest  interesting in Mandi. In 2017, Sukh Ram had joined the BJP just a month before the assembly elections  and BJP won all 10 seats in Mandi district. Sukh Ram had joined the BJP alongwith his minister son Anil Sharma, who was minister in the Congress government.

Sukh Ram had helped Prem Kumar Dhumal to form government in 1998 when he asked three of the MLAs of his Himachal Vikas Congress (HVC) party to join the BJP so that Congress could not defect them to form government. He was thrown out of the Congress when huge money was recovered from his Mandi house during a raid. After that, he became bitter for Virbhadra Singh, who was CM. Sukh Ram on few occasions alleged that Singh was allegedly behind raids at his residence.

With Ashrey getting the Congress ticket from Mandi, things will be little tough for the BJP in this election, especially if former chief minister Virbhadra Singh supports him. Virbhadra Singh has already made elections visits to his constituency. Sukh Ram himself enjoys good hold in the region. Mandi had always been a stronghold of Sukh Ram who have won 14 assembly elections from Mandi seat besides two Lok Sabha elections. He, however, lost on two other occasions.

In Kangra Congress has fielded a OBC MLA Pawan Kajal. The OBCs are in large number in the Kangra parliamentary constituency. Kajal will be facing Kishan Kapoor of the BJP, who is a minister in the Jai Ram Thakur government. Kapoor is a Gaddi leader, who are in good number in the constituency. Kangra is considered to house Gaddi’s majority voters. Not only in Kangra, this community also resides in tribal area of  Bharmaour in Chamba. This constituency may witness keen battle this time as Shanta Kumar is out of race now.

In Hamirpur, BJP has repeated its sitting MP Anurag Thakur, who is considered as most strong BJP candidate among all the four seats in the state. He has already won this seat three times. Anurag is considered as one of the most promising young leaders in the BJP.

Congress has fielded former minister Ram Lal Thakur against Anurag.  It will be quite interesting to see contest on this seat. Former BJP chief and three time MP, Suresh Chandel, was also trying to join the Congress and get ticket. However, he could not succeed. The internal politics of the Congress blocked his way as most of the top Congress leaders were against his entry in the party.

Ram Lal had lost elections three times on this seat. However, Congress has again expressed faith in him. Few in the party feel that he may get sympathy of the voters for being rejected thrice. However, BJP candidate Anurag Thakur is a popular face in the area and it will be interesting to see how Ram Lal counters him. With former state BJP chief and three time MP Suresh Chandel also joining the Congress, Ram Lal claims that he is in better position this time.

In Shimla, Congress has expressed faith in MLA and former Congress Working Committee (CWC) member Col (Retd) Dhani Ram Shandil. He had won on this seat in 1999 on HVC ticket. This reserve constituency is also likely to witness a interesting battle this time. BJP denied ticket to sitting MP Virender Kashyap due to cases against him.

This election will be a first big test for Jai Ram Thakur who became chief minister in 2017. BJP had won all four Lok Sabha seats in the state in 2014 during Modi wave. Now it will be a big challenge for Jai Ram to retain all the seats. He has been a thorn in the eye of many, even in the party, for allegedly doling out big state projects to his constituency or home district Mandi.

However, he has denied the charges. Jai Ram told Tehelka that these are just rumours aired by Congress leaders. ‘’Modi government has sanctioned many projects for state and there have been equal distribution of funds for all 12 districts. Previous Congress government failed to brought projects and even misused the money which was allocated for the developmental projects of the state,” added the chief minister.

Mukesh Agnihotri, leader of the Opposition in state assembly, alleged that Jai Ram government has failed in the last one year and people will give a setback to BJP in the coming Lok Sabha elections. ‘’The BJP government have not even fulfilled its single promise during 2017 assembly elections,” added the Congress leader. Polling in Himachal Pradesh will be held on May 19, the seventh phase. Top BJP leaders — PM Narendra Modi, BJP chief Amit Shah, Congress president Rahul Gandhi, star campaigner Shatrughan Sinha are likely to campaign for their respective parties in the hilly state.

Two assembly bypolls will be inevitable in the state after Lok Sabha results. The reason is that both Congress and the BJP have fielded sitting MLAs on Kangra and Shimla seats. In Kangra, BJP candidate Kishan Kapoor is a MLA from Dharamshala and minister in the BJP government. The Congress candidate Pawan Kajal is also a MLA from Kangra reserve constituency. On the other hand, BJP has fielded Suresh Kashyap while Congress candidate is Col (Retd) Dhani Ram Shandil. Both are MLAs.

Jolt to the BJP

Former state BJP chief and three-time MP Suresh Chandel joined Congress recently, giving a big jolt to the BJP. Though local Congress leaders are strongly opposing his joining, Chandel supporters claim that he will be able to make a dent in BJP votes.  However, a senior BJP leader in Bilaspur said that Chandel is out of mainstream politics for long time and has no impact on voters now. 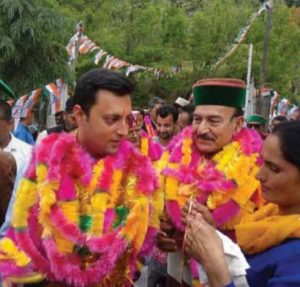 Perhaps this is happening for the first time in the state politics that father is a BJP MLA and son is Congress candidate. In Mandi, Anil Sharma till recently was a minister in the BJP government. However, he was forced to resign after his son Ashrey joined the Congress and has got party ticket. Mandi is the district of CM Jai Ram Thakur. Now Anil Sharma is still a MLA in the BJP and son Ashrey is contesting on Congress ticket in Mandi. It is said that Anil is silently supporting his son. 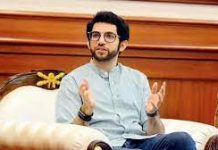 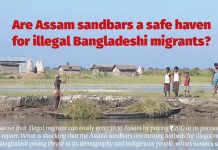