In Bihar’s Jehanabad molestation case, a special investigation team formed by Patna Zonal IG Nayyar Hasnain Khan have arrested four youths from Bharthua village under Kako police station area on April 30.
The accused were named as Amar Kumar (18), Deepak Kumar (18), Sunil Kumar (18) and a 14-year-old minor.
The police reportedly identified the accused using video footage of the incident that went viral on social media on Saturday night.
The incident came to light when a shocking video showing a group of eight youths molesting a girl in broad daylight went viral on the night of April 30. The girl kept on pleading for mercy while trying to escape.
The police team, have arrested four including a minor from Bharthua village in Jehanabad within 24 hours after the video went viral, said IG Hasnain while talking to mediapersons on April 30.
“The police team tracked down the location from the motorbike which was on the viral video. On the basis of the number plate, the district transport officer traced the location of the owner of the bike. However, the owner of the bike is yet to be arrested,” said the IG.
From the arrested youth Amar Kumar, the police also recovered the mobile phone which was used to make the video

Facebook removes 687 pages, accounts linked to Congress ahead of Lok... 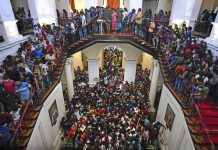