The relatives of those killed on January 8 say they were not Naxals but innocents shot in cold blood by rival tribesmen you have hired as Special Police Officers (SPO).
The last two years have seen some eight encounters. Each time they said we killed innocents. This is the Naxals’ propaganda warfare. They use the institutions of democracy — the courts, the NGOs — for their ends. This was no stage-managed killing. It is an absolutely false allegation that we killed defenceless people. It was a genuine encounter. No media comes when my boys are martyred. But every time we kill Naxals, a media trial takes place. I have been on the Naxals’ hit list for nearly two years. I have lost 60 policemen, including an Additional SP. I have carried their bodies on my shoulders. And then I’m told that the Naxals are “simple villagers who are innocent”. Not fair. In December 2007, Naxals ambushed and killed 12 policemen, and it took us two days to bring back their bodies. Their widows came to me and said, “You could have at least brought our husbands’ bodies back earlier.” It was a very emotional moment. You can understand this only when it happens to you. Nobody comes to grieve with us when my men die.
What are the major problems in counter insurgency ops against the Naxals?
The Naxal-controlled areas are very remote. The Naxals have bombed the roads. In the December 2007 incident, I had to go in with 100 men to retrieve the dead bodies of the 12 policemen using a helicopter. Until the January 8 killings, police hadn’t been to Singaram [the village near where the killings took place] in five years.
What are the goals of the police against the Naxals?
I am fighting to establish the authority of the state. The fact is people have lost the fear of the law because they feel they can get away with anything. My job is to take hard police action against the Naxals. The fear of the law is to be ingrained in the people.
How well-equipped are you to do that?
We have a sanctioned strength of 1,800 policemen in Dantewada, but we have only 900. The current average number of policemen per police station is 35. This needs to go up to about 70 or 80. We are now recruiting 600 more. Over the next five years, we will have 5,000 men in Dantewada. We are training many policemen at the Counterinsurgency Jungle Warfare School at Kanker [in south Chhattisgarh]. I have myself trained with the Indian Army at Mizoram and with the College of Military Engineering at Pune. We have AK47s, SLRs, INSAS, and two-inch mortars. The CRPF has rocket launchers. We have anti-landmine vehicles, one of which, however, was blown off by the Naxals in 2005 when they planted a powerful 100-kg bomb. Twenty-four men in that vehicle were martyred. We also have 1,200 SPOs, though we need more. The CRPF has three battalions in Dantewada, with over 2,000 men. One battalion of the Sashastra Seema Bal guards the [Salwa Judum] relief camps.
Is the police ready for the fight?
The police are in a defensive mentality because the Naxals rule the region and kill them at will. The IPS officers rarely completed their terms here. The state government has now made a policy that all young IPS officers must do a two-year tenure in these areas. We need more special laws like the Chhattisgarh Special Powers Act. Paramilitary organisations such as the CRPF want the Armed Forces Special Powers Act to be invoked here. Please understand: the situation here is more precarious than in the northeast. The casualty rate here [of the forces] is the highest in the country. In 2007, we lost 123 jawans from all the forces, not including the SPOs. Last year, we lost 67 men. Right now, it is a negative attrition rate: more policemen than Naxals are killed. We have to reduce our casualty rate. We need to hit them hard. In Jammu & Kashmir, the ratio of men in uniform killed to the terrorists killed is 1:4. We have to get to that ratio. I know this is crude, but we are working in a crude situation. It will not be easy. Villagers tell me, “you come once a year, but the Naxals beat us everyday.”
Do the January 8 killings mean you are upping the ante? Will violence on both sides go up?
Violence is definitely going to go up on both sides over the next two-to-three years. That is because we have disturbed the status quo, which was in the Naxals’ favour. If they kill my men, I have to retaliate. It is a full-fledged war. We have to be on the offensive. Singaram was offensive: we went into their territory. The police have become strong. The Naxals are scared and targeting truckers and road contractors.
Is hard police action the only way? What about bringing development?
Police can kill Naxals but not Naxalism. Without development, this problem cannot be solved. Improving education, healthcare and public distribution has to be the thrust. We also want the displaced people in Salwa Judum relief camps to go back to their villages. But the Naxals don’t want development. They don’t want the roads because that will bring schools and development, and wide exposure to the villagers. All government departments surrendered to the Naxals long ago. No one goes into the forests.
Do you have political support?
Chief Minister Raman Singh and Director-General of Police Vishwa Ranjan have told me that we must hit the Naxals and not go back on this. Enough is enough. ‘Live and let live’ won’t work. We will carry out searchand- destroy operations in their territory. We are going to follow the model of Andhra Pradesh where the Greyhounds have managed to control the Naxals. 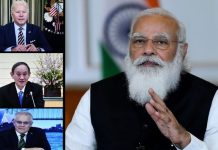