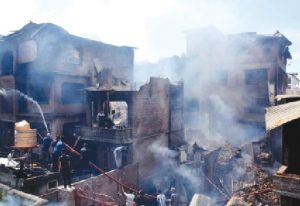 On May 18, security forces cordoned off Nawakadal locality of downtown Srinagar after they received the tip-off about the presence of militants in the area. In the consequent gunfight, two militants were killed, one of them Junaid Sehrai, son of the top separatist leader Mohammad Ashraf Sehrai. In the process, 15 houses were blown up including the house in which the militants were holed up. In the subsequent week, three civilians have died after they were critically injured when the explosives left behind by the security personnel in the debris went off.

Earlier, at Beighpora in South Kashmir, several houses were destroyed when security forces killed the Hizbul Mujahideen Operational chief Riyaz Naikoo along with another militant. In a span of a fortnight, Hizb chief and the deputy chief (Sehrai was the second in command) were killed. But this, in no way, detracts from the renewed challenge of the militancy in the Valley. Since the beginning of April, around 25 militants have been killed but around 20 security personnel have also lost their lives, the highest such loss in a short period of time since the suicide attack on a CRPF bus in February 2019 that killed 40 personnel.

The turn of events has been a source of deep concern for the security agencies. Recent reports have indicated a rise in infiltration and influx of trained and battle-hardened militants, What is more, almost all of them killed in combat with the security forces have turned out to be Kashmiri militants. This has pointed towards a fillip in the local recruitment to militant ranks.

“We can’t conclusively say that the local youth are joining in bigger numbers but there are some pointers to the effect,” said a police officer on the condition of anonymity. “Some infiltration has taken place but we don’t think many militants have crossed over”.

According to an estimate by J&K Police, the number of militants in the Valley is 200 to 250. More than 70 militants have been killed since January and this should normally have brought down to number to around 150 to 170. But this is not how it is: Going by the trend so far, the killings of the militants are simultaneously replenished by the fresh recruitment. So, the number basically doesn’t change much.

“So far the situation has been like if we kill 200 militants a year, another 200 also get recruited that keeps the number unchanged,” said the police officer. “This keeps a certain level of violence going through the year”.

The effort of the security agencies is that the number shouldn’t rise significantly. If the number doubles this is expected to alter the ground situation. As of now, however, this is not the case. The number of militants is estimated to be around 200.

“This is happening again after a long break and shows the growing striking capability of militants,” said Naseer Ahmad, a local columnist. “If the situation continues along these lines, it promises a hot summer”.