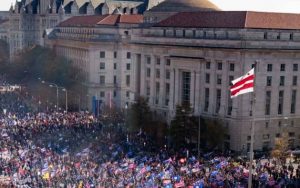 According to reports, a clash erupted between the anti-Trump organizations Antifa, Black Lives Matter (BLM) and the pro-Trump Proud Boys.

The clash occurred a short distance from the White House and lasted a long time. However, the police later arrived and separated the groups and arrested several people.

Many people were also injured on both sides.

Thousands of Trump supporters have flocked to Washington to take part in the ‘Million MAGA March’ to show support for Trump. As per reports, the scuffle started after anti-Trump protestors overturned the tables of vendors selling pro-Trump gear. Both sides threw fierce punches and slogans.

Donald Trump has refused to concede defeat and has legally challenged the results of elections, since Democratic presidential candidate Joe Biden was declared as President-elect.