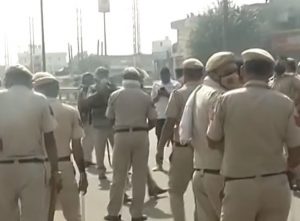 Violence erupted on Sunday after protestors blocked National Highway 2 in Ballabhgarh, demanding justice for the 21-year-old woman who was murdered on October 26.

According to reports, A ‘mahapanchayat’ was called by people of 36 communities in Ballabhgarh today over the murder of Nikita. Representatives of various political parties along with the family of the victim participated in the meeting.

While the meeting was still going on in the Dussehra ground, people of some other organization started raising slogans saying that the murder was being politicized.

They accused the BJP and Congress of politicizing the matter and started an uproar. After this, they reached the highway in Ballabhgarh and blocked it. The police force also reached the spot as soon as the information about the jam on the highway was received.

Some miscreants among the protesters on the highway suddenly started vandalizing shops after which stone pelting started. It is being reported that about 20-25 youths from other communities also pelted stones at the police.

The situation is still tense.

On October 26, a woman was shot dead in broad daylight by a man outside her college in Haryana’s Ballabhgarh. The assailant tried to forcibly make her sit in his car but the woman refused. Failing the possible bid to kidnap her, the assailant shot the girl and later fled with his associate in a car. The girl was rushed to the hospital where she was declared brought dead. The incident was captured on a CCTV camera.

A special investigation team has been formed to ensure a quick probe into the case. Police have arrested three persons, including the main accused Tausif.