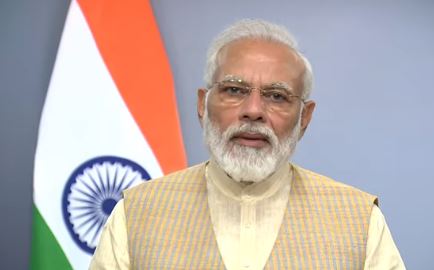 The centenary celebration of the birth anniversary of the founding father of ISRO – Dr Vikram Sarabhai kicked off in Ahmedabad on Monday in the presence of dignitaries from ISRO, Department of Space, Department of Atomic Energy and members of Sarabhai Family. Prime Minister Narendra Modi addressed the gathering through a video message.

In his Video message, Narendra Modi said that it will be a tribute to Dr Sarabhai from crore of Indians in true sense when ‘Vikram’ lander will land on Moon. He also said that Vikram Sarabhai’s ideology leads India to become a powerful country in the field of science and technology. Modi said Dr Homi Bhabha’s demise had created a vacuum in the world of Indian science. At that time, Vikram Sarabhai gave a new dimension to science with his skills and leadership ability.

Describing Dr Vikram Sarabhai as a dedicated soldier for Vignan, Modi said that he encouraged science as well as India’s culture and Sanskrit language. He always gave time for the students.

Modi said that Dr Vikram Sarabhai has left a legacy for us and it is our responsibility to take this legacy to the people. He also encouraged school children to participate in the online space quiz launched by ISRO.

During the inaugural programme, an album on the life story of Dr Vikram Sarabhai, a coffee table book on ISRO and commemorative coin from Department of Atomic Energy were released. ‘Space on Wheels’ an exhibition inside a bus was also inaugurated on the occasion.

The yearlong Dr Vikram Sarabhai Centenary Programme includes exhibitions, competitions to school children, journalism awards and speeches by eminent personalities.  The programme will be conducted across 100 selected cities all over India commencing today and ending on August 12, 2020 with the valedictory function at Thiruvananthapuram.