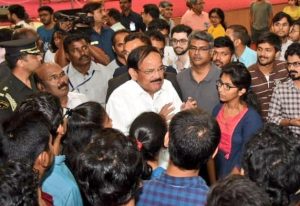 Vice President M. Venkaiah Naidu on Saturday called upon the youth to become agents of change and take lead in addressing the challenges such as illiteracy, economic inequalities and social discrimination based on cast, creed or gender.

Addressing students of Indian Institute of Technology, Madras through Extra Mural Lecture Series on the subject “India 2020 to 2030: A Vision for the Decade,” Naidu expressed concern over the growing tendency to use technology irresponsibly to spread fake information or hate messages. He opined that the moral compass of the society that was essential to enhance common good and well being of all was losing relevance.

Stressing the need to celebrate India’s greatest asset, its tremendous diversity, Naidu said that one must understand about the time-tested bonds of unity that were deeply rooted in this great diversity. He called for keeping these bonds strong to preserve India’s unique identity and show the world the path towards harmonious co-existence and celebration of differences.

On the Citizenship Amendment Act, the Vice President asked people to study the Act, and understand its background, and then come to any conclusion. Naidu said that CAA came in to being after it was duly debated in both the Houses of the Parliament.

Maintaining that democracy allows everyone to express their opinions, the Vice President asserted that expression of one’s opinion must be in a democratic manner, and it should not hurt the interest of the nation.