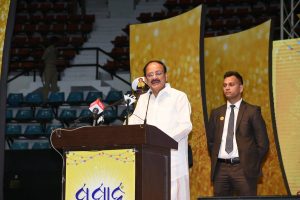 Vice President, M. Venkaiah Naidu on Sunday asked media to shun the tendency to sensationalize and present facts dispassionately without mixing news and views. He said that media must remain honest and truthful and act with great restraint and responsibility.

Speaking at the centennial celebrations of ‘the Samaja’, a leading Odia Daily,in Cuttack, Odisha today, he said that a free and fair media was not just a part of a healthy democracy but was an indispensable prerequisite. “Media has been considered the fourth pillar of the democratic system– a pillar that supports, nurtures and nourishes the democracy and helps in course corrections as and when necessary”, he added.

Stating that media must inform, educate and enlighten people, Naidu said that it has a critical role to play in the formation of public opinion. He asserted that media must empower citizens and help in ushering in greater transparency and accountability in the governance system. “Media must amplify the voice of citizens and communicate their opinions to lawmakers”, he added.

Naidu urged media to expose loopholes in the democratic system, thereby helping the government in making the system more accountable, responsive and citizen-friendly. “Democracy without media is akin to a vehicle without any wheels”, the Vice President added.

Describing journalism as a mission, Naidu said that TRPs, circulation figures and bottom lines, though important, must not dictate media’s path. He said media must place the welfare of the common man and the progress of the nation at the centre of all its activities.

The Vice President asked media to get rid of established prejudices and give voice to the expectations of youth, women, farmers and entrepreneurs. “Media must act as the moral compass and the conscience of the society and must aggressively campaign to end all social evils. It must become the voice of the voiceless and help the helpless”, he added.

Underscoring that media had the potential to be a vehicle for change in status quo, he called for the reporting and highlighting of more positive stories and best practices to inspire positive changes. He asked media to also lend a hand in protecting, preserving and promoting India’s rich cultural heritage and languages.

Referring to the stellar role played by Indian media in making the Swachh Bharat Movement a resounding success, Naidu asked media to play a constructive role in solving the burning problems of our time, from poverty to disease to climate change.

Speaking of the rapidly proliferating social media, a by-product of which is fake news, the Vice President expressed concern that the pervasive menace of fake news threatens to destroy the credibility of media and asked media to effectively tackle and disprove fake news by taking control of the narrative.

He expressed hope that more and more vernacular newspapers would come up in India, promoting regional languages and spearheading prosperity of rural areas. He opined that regional media could truly transform the rural landscape of India through prudent, prompt and truthful reporting.