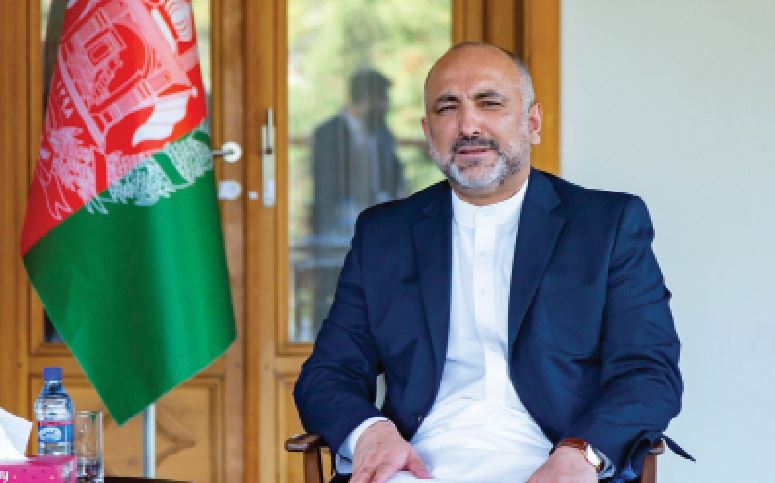 THE AFGHANISTAN Foreign Minister Mohammed Haneef Atmar was in New Delhi on March 22-23, 2021, in which he talked at length on various issues his country is mired in. Apart from expanding bilateral relations, talks on peace process in Afghanistan could not have been missed by both the FMs as the looming Turkey’s engagements with Afghanistan, Taliban, US, Russia, China and Pakistan nears.

Atmar, in an interview, told Priti Prakash that the Afghan government is negotiating with the Taliban to make sure that the country does not become a safe haven for international terrorism. ‘International terrorists are keen to turn Afghanistan into not just their battle field against us but into a safe haven for the extremists from rest of the world, including India and our western partners. Our strategy is to secure the world against terrorism by exterminating Taliban from the region.’

With the next round of talks for peace process between Taliban and Afghanistan in Turkey, what are your conditions for peace?

Peace with them will be on the condition that firstly Afghanistan will remain  a sovereign, peaceful, unified and independent country, its legitimacy will flow from the people and inclusive government which will be committed to the rights of the people. It will remain truly respectful of human rights and with a multi-alignment policy, it will pursue cooperation with all our regional and international partners. It’s not simply an ideological conviction. It’s a necessary condition for a lasting peace.

If any peace is to be lasting it will have to be built on commitment, rights, women empowerment, freedom of speech, and those basic values that are universal. Of course there are people out there who do not want such peace because their interest is in continuation of bloodshed and violence. In that attempt they are trying to kill the most innocent and defence-less section of our population, specially journalists, civil society leaders and civil servants. We will make sure that their sacrifice of the women killed does not go in vein.

What are the specific proposals made by the Ashraf Ghani government on the roadmap?

Our government’s political leadership is reviewing the ideals that have been put together in a proposal, which is not a US proposal. Afghanistan has always been looking at ways in which we could offer a legitimate and at the same time a fully acceptable way to the Taliban. President Ghani has offered that if the Taliban accepts a political settlement based on the vision and is acceptable to Afghan people then he will agree to have elections as a legitimate means of transfer of power, an early presidential elections which means that he will not wait until the end of his term. The elections will be administered and monitored by the international community, will be transparent, free and fair. Any other thing contrary to this will be a violation of our constitution. Now Taliban and some others may want to violate the constitution but the way for it is as per the constitution of Afghanistan.

What are the prospects of an Interim government setup?

An interim setup will be a departure from the constitution and the people of Afghanistan would not want their future to be determined by anybody but themselves. Who is selecting an interim arrangement, where do they get legitimacy for that setup is not clear but what is definitely clear to the people of Afghanistan is that they are the ones entrusted with the responsibility to determine their future and to do this our constitution has offered a legitimate pathway which is election. Therefore the President is proposing that rather than exploring unconstitutional ways which may certainly unravel the games of the past 20 yrs, he is making a political sacrifice for the constitutionality of Afghanistan by offering early Presidential election.

What role of India you are looking at, other than development, defence etc.?

India has legitimate interest in peace in Afghanistan and so we are seeking a greater role for India in the process. We have already said that a lasting peace in Afghanistan will be on the basis of national, regional and international consensus. Our war has never been a civil war. It’s been a war from outside on Afghans using some Afghans and some foreign fighter. India is part of the regional and international consensus building. Our number one area of focus is to work together in building this consensus on peace building process. Meeting in Turkey or UAE or any other regional or international initiative, like the Heart of Asia, Istanbul Process, later this month in Dushanbe which will be attended by FM S Jaishankar, will have the political role of India not just with Afghanistan but with our regional and international partners. India will be part of the legitimate peace process of Afghanistan. That is a necessary conditionality there.

In the last 20 years Afghan women have come forward with resilience in many areas. Taliban avoids sharing table with women. How do you see this panning out?

I believe we cannot separate women’s rights, freedom and empowerment from the rest of our society. If women are deprived of their basic rights and for the progress that they have made especially over the past 2 decades that means that we are reversing the progress of the entire civilisation. So the peace that is reversing those gains will be the beginning of another conflict. Their role is expanding not just in service industry but also as politicians as lawmakers, as administrators of judicial system, every aspect of life that benefits from women participation should only be expanded.

What came up during talks with FM S Jaishankar, particularly on Defence and economic cooperation fronts?

We have a strategic partnership agreement. Within that framework security cooperation is a legitimate area for both our governments. All cooperation primarily for peace and economic cooperation as well as regional connectivity are key topics that we discussed. Based on the Strategic Partnership we do have commissions and committees working groups. The immediate one is on vaccine cooperation, second is trade and transit including Chabahar and third is regional connectivity that we are committed to. Connectivity between Central Asia and South Asia is going to benefit entire Asia.

How do you aim to achieve lasting peace? What was discussed at the Moscow meeting?

No lasting peace will be lasting unless we hold discussion with the Taliban. At this moment we want them to come to the table for negotiation. We are looking at specially victim-centred approach to justice. The victims of conflict over 40 yrs will have to be considered as the key for not only a judicial process but also rehabilitation and reconciliation. Our objective is to achieve benchmark for political stability.

Nothing was discussed with the Taliban in Moscow. They were in no mood to discuss. They just delivered speeches that were not necessarily pro peace to our disappointment. We hope they have a different behaviour in the forthcoming meet.

What do you expect to be the highlight in the forthcoming peace talks between Afghan government and Taliban in Turkey?

There are three things to discuss with the Taliban that we haven’t really had a chance to discuss given some of their extremely unpredictable behaviour over the coming months. First, a permanent and comprehensive ceasefire and an end to the bloodshed. Second a political settlement consistent with the vision of Afghanistan acceptable to the people of Afghanistan and the key of that political settlement will be that both sides agree to accept the free will of the Afghan people in elections. Third, regional and international guarantees for the peace agreement. The only progress in Doha had been on the rules of procedure for the negotiation which will provide the framework for these settlements.

The falling number of minorities in Afghanistan specially Hindus and Sikhs are a matter of concern for India . How will the peace dialogue address the safety and prosperity of this section of the minorities?

Hindus and Sikhs brothers and sisters are citizens of Afghanistan. The violence against Afghans unfortunately did not spare our minorities either so it’s not a kind of persecution against a particular minority per se. It’s a general violence against the entire nation. We thank India for offering protection to our people at risk. For past centuries India has been home to Afghans who felt at risk. We are working on this issue that it does not become a kind of minority cleansing by terrorists or anybody else.

How do think the Afghan government can make Taliban change their mindset, accept the Constitution, respect women and come to the table?

For almost two decades Taliban has been saying that they are fighting for the presence of foreign troops in Afghanistan. So we said if this is what you are fighting for lets reach an agreement that when foreign soldiers would leave we will also want you to make sure that the foreign fighters also leave Afghanistan. That we agree on a political settlement. Now if this is what they wanted this is what we offer through a legitimate process. Second, continuation of war is not going to be a one-way traffic of victimization. It’s going to affect them as well. And now as the world knows where they are and where their leadership is they will have to be more cautious as to how they address the peace and war issues. So if it is about an Islamic government the government of Afghanistan will be ready to engage them at any level of Islamic scholarly discussion. Presence of any Muslim scholar from any part of the world including the Deoband – Darool – uloom to see if there is anything wrong in Afghanistan Constitution from Muslim perspective, will be welcome. Something that we will not accept is their version of certain Islamic concepts and tenets and not necessarily shared by Afghans or the Muslim World. They cannot impose it on us neither the Afghan women nor men but we will be absolutely open to any debate or dialogue with them on enhancing the rights of the people.

Another reason for this conflict is there are vested interests. Not just political but there are economic reasons for the violence to continue and this way we are offering Taliban an honorable way of making peace.

Is Chabahar a game changer and how much improvement has been recorded in terms of connectivity and development?

Chabahar is not just a game changer for Afghanistan but for the region and central Asia.India and South Asia will benefit too. It will be a key transit route as part of the greater north south transport route. Chabahar is a key port. Iran is investing in a railway from Chabahar to the border with Afghanistan. With this the vision of connectivity between Central Asia and South Asia will be realized.